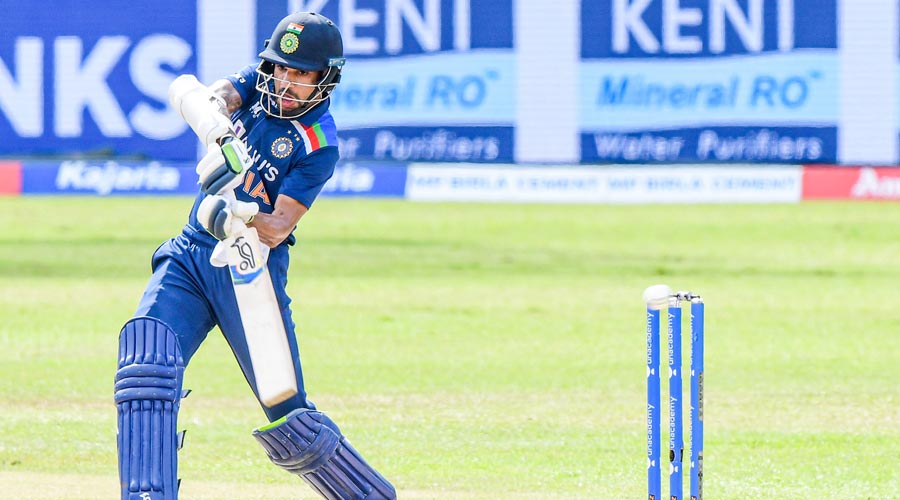 There was a six over deep mid-wicket off Akila Dananjaya but the innings did lack the punch despite four more boundaries.
File picture
Our Bureau, PTI   |   Colombo   |   Published 25.07.21, 10:28 PM

Suryakumar Yadav continued his rich vein of form with an another attractive half-century but Sri Lanka bowled well to restrict India to 164 for five in the first T20 International here on Sunday.

Surya's second T20I half-century was complemented by useful contributions from skipper Shikhar Dhawan (46 off 38 balls) along with Ishan Kishan (20 not out off 14 balls) at the back-end.

But looking at the partnership, it was evident that the junior partner was batting in a more assured manner, having already sealed his place in the T20 World Cup team while the skipper is still fighting what looks like a losing battle to jostle inside that jam-packed top-order in the main squad.

There was a six over deep mid-wicket off Akila Dananjaya but the innings did lack the punch despite four more boundaries.

It was Surya's five fours and a six that really helped Kishan and Hardik to launch the final assault.

At the start, Prithvi Shaw had a forgettable T20 International debut as Dushmantha Chammera's (2/24 in 4 overs) outswinger found the edge of his bat off the very first delivery of the match.

Sanju Samson (27 off 20 balls) hit his customary six while batting like a millionaire before Wanindu Hasaranga (2/28 in 4 overs) trapped him with a googly.

Surya as usual was in his free-flowing self, hitting those whiplash on-drives, cover drives and ramp shots which is a sight to watch both against pacers and spinners.

However what was exhilarating was how Surya picked all those back-of-the-hand slower deliveries from seamers Isuru Udana and Chamika Karunaratne.

Udana was dispatched with a conventional sweep shot for boundary while Karunaratne was slog swept for a six.

When Hasaranga came for his last over, he went inside-out to loft him for a straight six to complete his fifty but the leg-spinner had the last laugh as he was not afraid to flight once more and this time the inside-out chip shot didn't have required wings to soar over the ropes.

His dismissal did rob India a chance to score 175 plus.