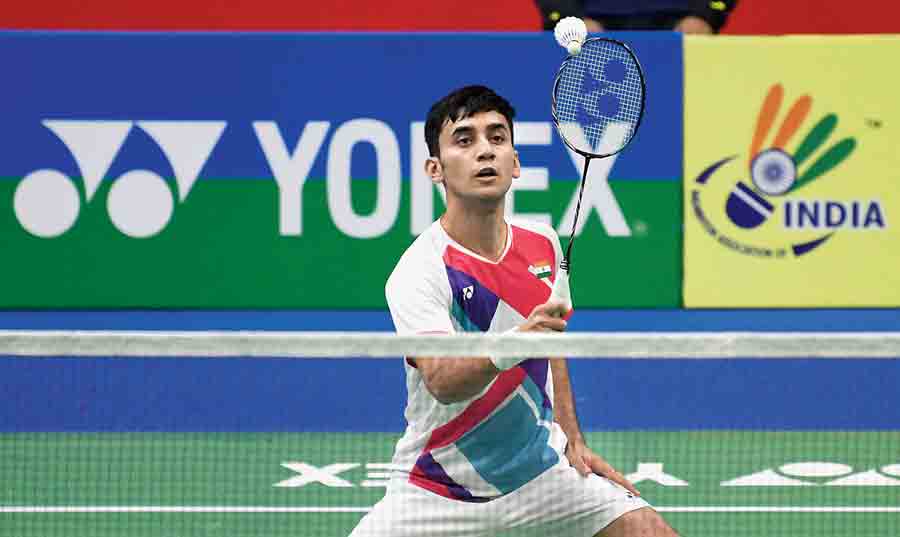 Lakshya Sen in action during the men’s singles final against Loh Kean Yew in New Delhi on Sunday.
PTI
Our Bureau And Agencies   |   Published 17.01.22, 01:53 AM

World Championships bronze medallist Lakshya Sen and the top men’s doubles pair of Satwiksairaj Rankireddy and Chirag Shetty claimed their maiden titles at the Yonex-Sunrise India Open on a ‘Super Sunday’ for the host nation.

While Sen secured his maiden Super 500 title with a stunning 24-22, 21-17 victory over world champion Loh Kean Yew of Singapore, Satwik and Chirag became the first team from the country to win India’s flagship tournament after registering a 21-16, 26-24 result over three-time world champions Mohammad Ahsan and Hendra Setiawan.

India’s Kidambi Srikanth had lost to Yew in the World Championships final in December.

For the 20-year-old Sen, who had claimed his maiden World Championships medal in Spain, it was a repeat of last year’s Dutch Open final but the Indian ensured that he has the last laugh this time around, after the 54-minute summit clash.

“It was a crucial first game. I was leading and then it became 20-20. But I managed to pull out the first game and it gave me a lot of confidence,” Sen said.

“I didn’t come with a lot of expectations in this tournament as I didn’t get a lot of practice after the World Championships. But I came into the final with a much better rhythm as I played few good three-game matches and I played more freely today.”

Satwik and Chirag came into the final with a 1-3 head-to-head record against their fancied opponents but they showed nerves of steel and saved five game points to overcome the world No. 2 Indonesian pair.

“We couldn’t really get a title or a final last year but coming to our country and winning a title is a good start to the year,” Chirag said after the match.

“It is a special to win against our idols. Playing against our comfort zone and wining it in a way that we generally play is something which we will take back from this win.

“It was one of the best game’s strategically...even when we won medal at Commonwealth Games or Thailand Open title, we stuck to things we were good at which is attack but today we won on our defensive game.”

Sen and Loh had a 2-2 head-to-head record with Sen losing two of the last three meetings but the Indian was the better man on show on Sunday. Sen grabbed a 9-6 lead before entering the break with a three-point advantage. The Indian was more polished with his strokes and net play, while Loh was erratic.

The Indian summoned his jump smashes and used them to telling effect to lead 16-9. Sen continued to control the rallies, leading 19-14, but a series of errors saw his lead evaporate and it became 19-19.

Loh grabbed a game point when Sen erred at net. The Indian saved two game points, wasted one himself but kept his cool to close out the opening game with a precise return at the backline.

After the change of sides, Loh ran up a 4-1 lead but Sen came up with a barrage of aggressive returns to make it 6-6.  The duo played some exciting rallies with quick reflexes but Sen managed a two-point advantage at the interval. He kept the match under control and eventually moved to three championship point with two superb smashes.