Icon, ‘facial hair’ and all

No one near Virat Kohli when runs in all formats are combined, says The Daily Telegraph's cricket writers 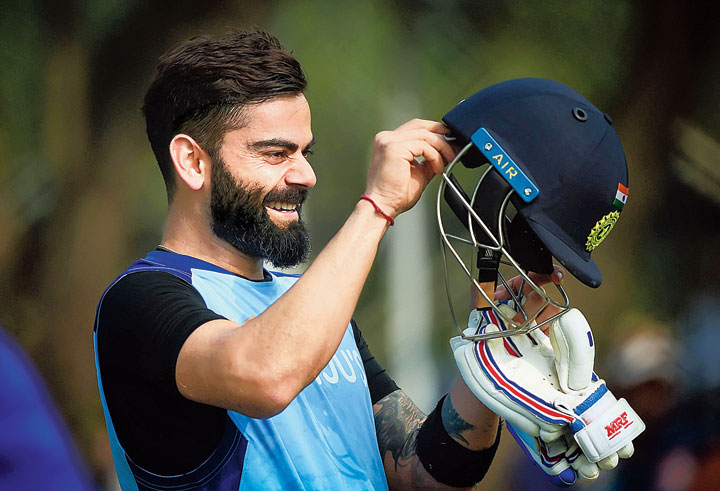 Virat Kohli, hailed as “an Indian icon”, has been made cricketer of the decade by The Daily Telegraph in London.

Under “Sports People of the Decade (Cricket)”, the Indian skipper is listed, alongside the Australian Ellyse Perry, “the greatest women’s cricketer of all time”.

England hasn’t always been a happy hunting ground for Kohli, nevertheless the Telegraph’s cricket writers, Nick Hoult and Tim Wigmore, have produced a reasoned defence for their choice of Kohli.

“Alastair Cook and even Joe Root have scored more Test runs than this man since the start of the decade, while Steve Smith has a much higher average,” they concede. “But when runs in all formats are combined there is only one cricketer who has dominated the past 10 years and dwarfed all others: Virat Kohli.”

There is an amusing line when they observe: “His team-mates follow his every command, right down to copying his facial hair.”

The argument is: “While Cook, Root and Smith have been superb players and prospered in a decade when batting in Test matches became increasingly harder, none of them led their country as well and shaped its cricket more than Kohli, the boy from West Delhi who blended the traits of MS Dhoni and Sachin Tendulkar.”

As for his salad days, “Kohli learned at the feet of those two giants marrying Tendulkar’s obsessive dedication to batting with Dhoni’s combative leadership skills.”

It is one of those articles that Kohli might want to preserve for his grandchildren.

The writers say that Kohli’s “mark is everywhere on Indian cricket, and thus world cricket. Kohli is the first Indian superstar to embrace modernity and drag his country along with him.

He has led from the front with his physical fitness, demanding players meet exacting standards to be considered for selection. Gone are the days of Indian batsmen being too important to take fitness, or fielding, seriously.

“His own batting has evolved, too. After a tortuous tour of England in 2014, he returned a different player, one ready to curb his stroke play to suit the swinging conditions, and dominated. In 2018, he scored 1,322 runs despite playing 11 of his 13 Tests away from home, including nine in England and Australia where Indian batsmen with big reputations are routinely, and with relish in Australia, cut down to size.”

It goes on: “He has aggressively encouraged fast bowling, preferring to pick an extra bowler over a batsman to win Test matches, making bowling quick an attractive, and desirable career path for young Indian cricketers who in the past have seen batsmen treated like royalty.

“He has challenged Indian cricket’s insular ways by urging his board to play more floodlit Test cricket and consider letting its players appear in leagues overseas.

“He led India to their first Test series victory in Australia last year, and India now play to win in Test cricket with the result they have been No 1 in the world for the longest period in their history.”