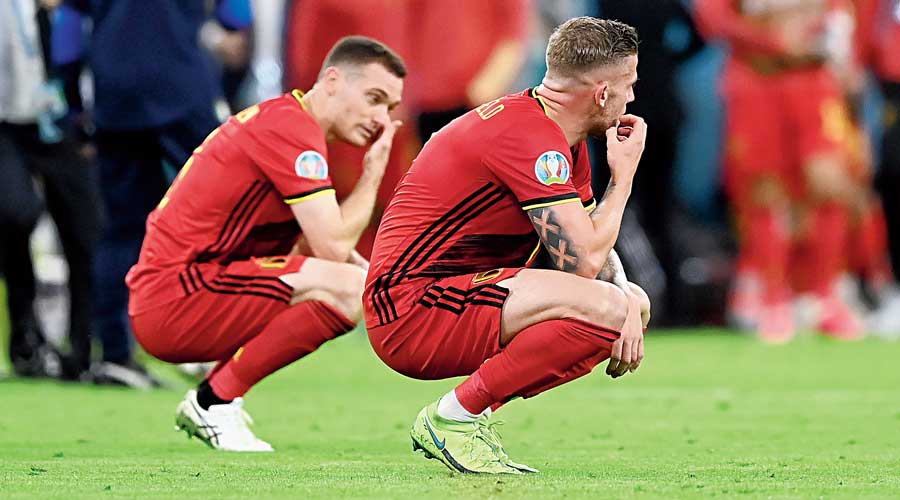 Belgium’s players were still, their faces blank, as they heard the clock strike midnight. At the other end of the Allianz Arena in Munich, Italy’s players were being slowly consumed by their fans, released only once they had surrendered their white jerseys and their green training bibs and, in some cases, their muddied shorts for use as future sacraments.

The team they had just beaten 2-1, though, barely moved. Kevin De Bruyne stared off into the distance. Thomas Vermaelen glared at the grass. The only clue that Roberto Martínez, their coach, had not been replaced by a statue — arms folded, brow furrowed — was the fact that his mouth was moving, furiously chewing gum.

Belgium’s last chance had come, and it had gone. That was what Martínez had internalised: that this generation “deserved” some sort of reward for all that it had achieved. Euro 2020 was the final opportunity to grasp it.

That was the bar that had been set, not far off a decade ago, when Belgium was anointed as the home of European soccer’s most recent golden generation.

It boasted Thibaut Courtois, one of the world’s finest goalkeepers; a defence marshalled by Vincent Kompany, Jan Vertonghen and Toby Alderweireld; a midfield patrolled by Axel Witsel and conducted by De Bruyne; and an attack that blended the trickery of Eden Hazard and the cold-eyed ruthlessness of Romelu Lukaku. They were just the most prominent names; behind them was a supporting cast of half a dozen more of Europe’s finest players.

That first team reached a quarterfinal in the 2014 World Cup, then was eliminated by a more experienced Argentina. It travelled to the same stage in the European Championship in 2016, only to fall to an unheralded, surging Wales side.

Two years later, at the World Cup in 2018, Martínez broke that particular ceiling: Belgium outclassed Brazil in the round of eight and fell by the most slender of margins to the eventual winner, France, in the semi-finals. A frenetic loss to Italy in Munich on Friday meant a backward step, a bowing out in yet another quarter-final.

Does it then mean that Belgium has failed? Success can — and should — be relative. For a nation of Belgium’s size, their record is formidable. Before 2014, it had not qualified for a major tournament in more than a decade. It had not been to a quarterfinal since the 1986 World Cup.

That will be of scant solace to the players, of course. Their talent warranted more.

Euro 2016, in particular, will be a source of regret. So, too, might the fact that this tournament was delayed by a year. Had Euro 2020 actually been held in 2020, Belgium would have been a year younger, a year fresher. Perhaps that might have made all the difference.

Vermaelen is 35, Vertonghen 34 and Alderweireld 32. Witsel, Nacer Chadli and Dries Mertens are all in the autumn of their careers, too. Hazard is only 30, but plagued by injury for the past two years. For some, the next major tournament, in Qatar next winter, is most likely a step too far.

Belgium’s golden generation — this squad that has been through only the most cosmetic of alterations since that first tournament in 2014 — will never make that final leap, will never win anything, not as it was meant to, not together.

This again is simplistic because when the clock strikes midnight, nothing stops. It just means that a new day is starting. Generations do not rise and fall in perfect synchronicity; they fold and meld and blend into each other.

Vermaelen, Vertonghen and Witsel might not make it to the next World Cup, but Youri Tielemans and Yannick Carrasco and Timothy Castagne will. So, too, crucially, will De Bruyne and Lukaku. Martínez, if he remains in place, will still be able to take a fearsome side to Qatar.

Nothing illustrates that better than the identity of the player who shone brightest, even in defeat, for Belgium against Italy.

It is not hard to be captivated by Jérémy Doku. He darts past defenders as if they are figments of his imagination. He hops, just a little, before he accelerates; he feints and shimmies and dances, the ball never leaving his spell.

At one point, as Belgium pressed in vain for an equaliser, Doku danced inside from the left wing, past one Italian, past another. When a third appeared, he went past him, too. It was fitting, really, that Giovanni Di Lorenzo — the Italian defender whom Doku had terrorised all evening — was one of those to give up his shorts in the celebrations afterward.

Doku, most pertinently, is only 19. For some members of Belgium’s golden generation, this is where the journey ends. For Doku, this is just a beginning. The clock has struck midnight. All that means is that there is a new day ahead.