‘Following’ Verstappen was a learning curve for champion Hamilton 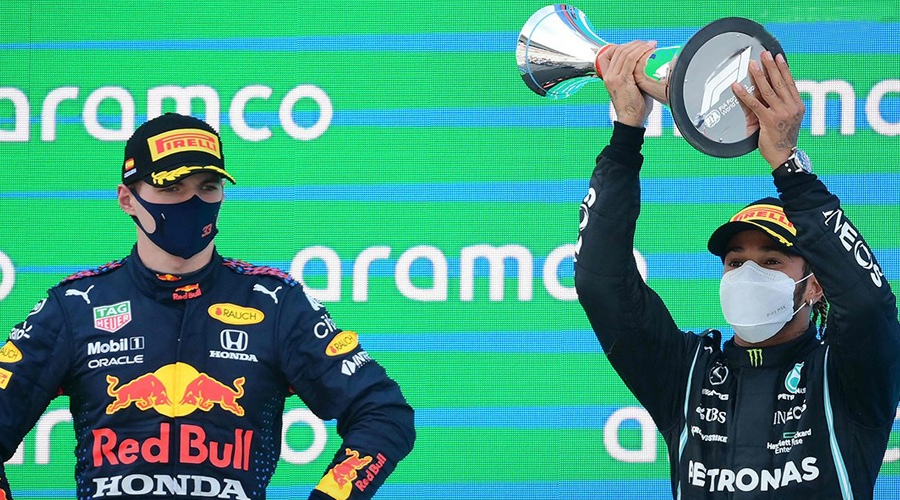 Lewis Hamilton may have opened up a new front in his battle with Max Verstappen after saying he learned more about his Formula One title rival, and the Dutchman’s car, in Sunday’s Spanish Grand Prix than in all the other races put together.

Mercedes’ seven-time world champion spent most of the afternoon behind Red Bull’s Verstappen but hunted him down at Barcelona’s Circuit de Catalunya to win and go 14 points clear after four races.

“It was actually a really good day. I learned a lot about Max today, perhaps more than all the other races put together. This has been a good one in that sense,” the Briton told reporters.

“When you are with people on track you get to see different things and watch closely,” added the sport’s most successful driver.

“Obviously I was following relatively closely and I learned a lot about his car and how he uses it, so it was a good race in that respect.”

Mercedes team boss Toto Wolff hailed another faultless performance by his driver, who now has 98 career wins, and said Hamilton’s ability to keep learning after so many years was impressive.

“Obviously if you have the possibility of following the other car and the other driver so closely, then you learn even more. And that may be an advantage,” the Austrian told reporters.

Formula One has always had its mind games as drivers seek every little advantage, and Hamilton spoke while sitting alongside second-placed Verstappen post-race at the Circuit de Catalunya.

The Dutch 23-year-old has experience way beyond his years, with some 123 starts and 11 wins, and is unlikely to have been unsettled by the thought Hamilton might have gained useful information.

He and Hamilton are fighting what amounts to a private battle and are two of the mentally toughest drivers out there.

The tone has so far been one of respect, of firm but fair racing, but there is still plenty of needle between the teams as the championship warms up.

“It’s something that Toto has mentioned to me previously. I doubt it was Lewis’s opinion, it probably came from elsewhere,” he said, adding that the wing was fully legal and had passed stringent load tests.

“We are not where we want to be, we still have to push hard and catch up,” said Verstappen. “At the moment we are a little bit slower.”

Asked to sum up what happened, Verstappen replied with a simple answer: “Too slow. That’s how you sum it up. There’s not much else to really discuss.

“I tried really everything to manage it as good as I could, the gap, but it’s just not enough. Behind you they are just pushing you and you see there’s clearly a bit more pace.”

Hamilton made a second stop, gambling on being able to make up 20 seconds in 23 laps with fresher tyres, while Verstappen stayed out and became, in his own words, a sitting duck.

He came in for fresh tyres to set the fastest lap after Hamilton had gone past.

“There was not much I could do out there to make a difference,” he said. “But nevertheless I think it’s still a good result.”