The second goal came in the 70th minute 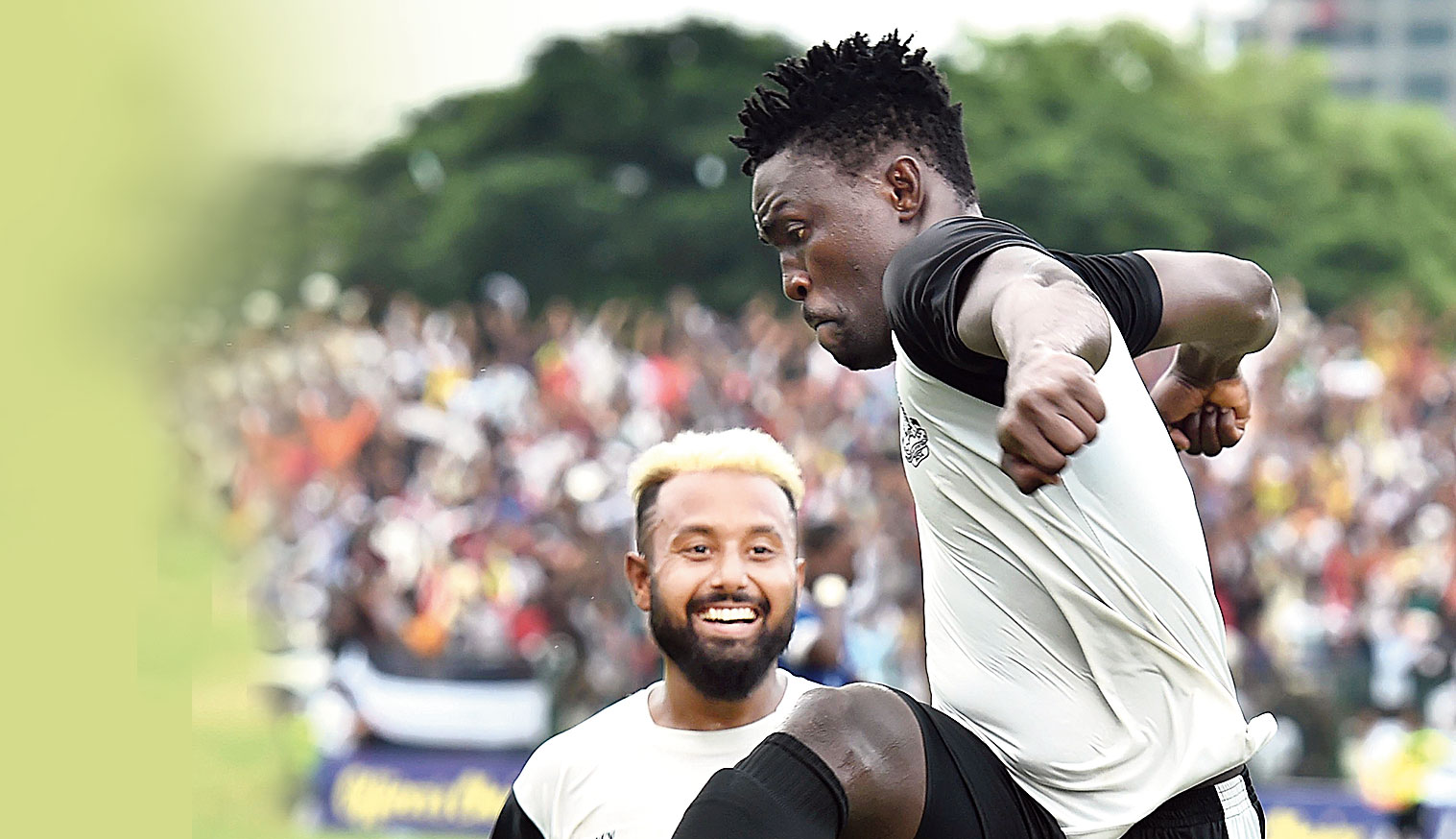 Kareem Omoloja of Mohammedan Sporting celebrates as Tirthankar Sarkar joins in after the former scored the first goal against Peerless SC on Monday.
Picture by Santosh Ghosh
A Staff Reporter   |   Calcutta   |   Published 23.09.19, 08:27 PM

The euphoria at the Mohammedan Sporting ground after Monday’s 2-0 CFL Premier Division A win over Peerless SC gave an impression that their 38-year wait for the title has ended.

The supporters scaling the fences, the beating of the drums, beaming faces… It was something one does not get to see more often at the Mohammedan Sporting ground. The men in demand were obviously the two goal-scorers Kareem Omoloja and Vanlalbiaa Chhangte, and the team’s midfield maestro Tirthankar Sarkar.

“The tempo is with us now. We need just one more win (against East Bengal) on Thursday,” Mohammedan Sporting technical director Dipendu Biswas said at the club tent, raising his voice by several decibels to beat the din.

“As things stand now, Mohamedan Sporting are on top of the table with 19 points from 10 matches. Both Peerless SC and East Bengal have 17 from nine matches, but the former have a better goal difference.

“In football you never know. Our supporters are all pumped up and that is giving the players a lot of confidence,” Dipendu said.

The CFL is still for Peerless to lose. They have the best chance even after Monday’s defeat. “Yes… We are still the favourites to win,” coach Jahar Das said. “This loss is disappointing, but all is not lost,” he said after the match.

Peerless SC’s main man Ansumana Kromah — serving a one-match suspension — watched the proceedings standing inside the fencing. On the ground, his teammates were bungling big time. Dipendu Dowary volleyed over from a position where he could have had at least kept the ball on target, Anthony Wolfe could not direct a shot from inside the box and at the fag end of the first half, Dowary again made a mess of a chance with only Priyant Singh to beat.

Then in the 54th minute, Wolfe beat his marker Omoloja by sheer speed and the latter in desperation brought down the Peerless SC striker inside the box. Referee Tanmoy Dhar did not have any hesitation in awarding a penalty.

Jiten Murmu stepped up to take the penalty and his feeble attempt sailed over the near post. The crowd went into a celebratory mode as if the home team had scored and Kromah in despair was on his knees.

The crowd did not have to wait long for the first goal. A minute after the hour-mark, Omoloja made amends. He got a loose ball inside the Peerless half and was surprisingly allowed to take a shot, which beat James Kithan all ends up.

A couple of minutes before though, Kithan was alert enough to fist away a Chhangte back-header.

The second goal came in the 70th minute. On the break, Tirthankar played a ball across the pitch to Chhangte. A smart receive and then a run which completely caught the Peerless defence off guard.