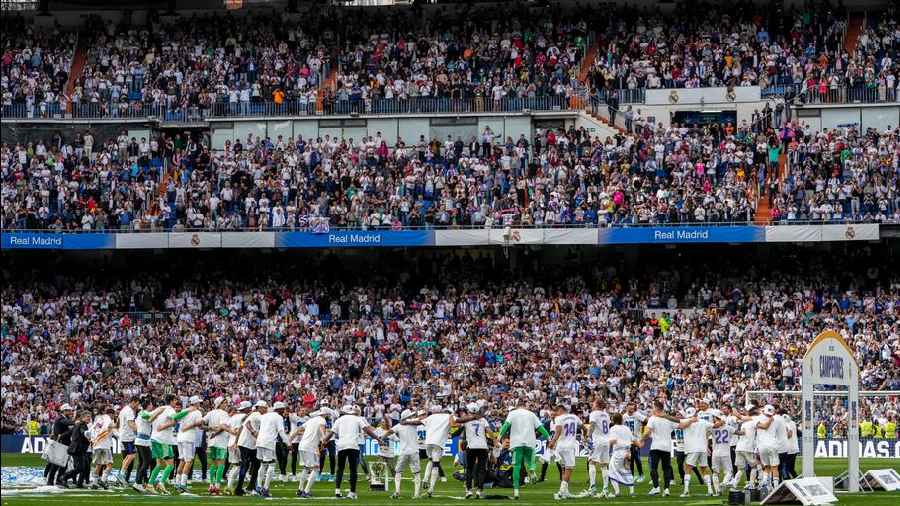 As Spain's top-flight football league kicked-off last weekend, for the first time, viewers in China could stream the matches through a new broadcast service.

La Liga, the organization that runs Spain's two professional leagues, is the first of Europe's major football leagues to launch a direct-to-consumer (DTC) option in China.

As part of a six-year partnership with Beijing-based Streamline Media Technology, La Liga Plus will allow Chinese viewers to watch every match from La Liga Santander and La Liga Smartbank, Spain's first and second-tier leagues.

Most of the content will be free, although the best games of the season will be sold pay-per-view.

"China is a huge football market and we aim to reach all football fans, not only motivated by business opportunities but also to contribute to the development of football locally in a country with such importance, size, and influence as China," Sergi Torrents, La Liga's managing director in China, told DW.

La Liga is engaged in an aggressive campaign to win over fans in Asia, one of the most profitable regions in the world for football.

China's sports industry, of which football takes a lion's share, was thought to be worth around $295 billion (€291 billion) in 2016, which is expected to climb to more than $800 billion by 2025, according to the Chinese National Bureau of Statistics.

According to the 2022 World Football Report by Nielsen Sports, a leading analytics firm, some 40% of Chinese respondents said they were interested in football, compared with 75% in Vietnam and 69% in Indonesia.

It estimates that there are 124 million football fans across the six Southeast Asian countries it covers — Indonesia, Malaysia, Philippines, Singapore, Thailand and Vietnam.

"For many European football clubs, Asian fans have long been seen as potentially being the goose that will lay a golden egg," Simon Chadwick, professor of Sport and Geopolitical Economy at SKEMA Business School in Paris, told DW.

Capturing the "Asian fan" played a big part in the attempt by Europe's largest clubs to form a "Super League last year. The plan was quickly postponed after widespread outcries that it would destroy domestic leagues in Europe.

Real Madrid president Florentino Perez, who was in charge of the business plan for the Super League, was explicit about needing to attract more revenue from Asia.

"Television pays: we, the big clubs, have fans in Singapore and China, everywhere…This is what generates money," he said in April 2021.

One problem for La Liga is that it's playing catchup with European rivals, namely the English Premier League (EPL), which has a far longer history in the region, analysts say.

According to the latest China Digital Performance Index, produced annually by Mailman, the sports digital agency, the EPL came first for Chinese fans on social media, followed not far behind by La Liga.

The launch of new DTV broadcasting in China, as well as in Thailand and Indonesia earlier this year, has allowed Spanish football to cater to the latest viewer habits, whereas other European leagues are still broadcast on satellite television across much of Asia.

Barcelona, one of Spain's two dominant teams, has opened sports academies in Asia, including four in Japan and two in China. Its former shirt sponsor, Rakuten, is based in Japan.

Valencia FC, another club in top-flight Spanish football, has been owned by Singaporean tycoon Peter Lim since 2014.

For the third straight year, Barcelona had more fans on Weibo and Douyin, two of China's largest social media platforms, than any other European team.

How can European football see success in Asia?

"There is no doubt that for many in Asia, Spain's La Liga remains a compelling proposition," said Chadwick. "Hence, it has considerable latent commercial potential, which the more active strategic management of will help to release."

Data is key to success, he added. Many European leagues and clubs "appear to be making current decisions about Asia on the basis of pre-pandemic market intelligence. My sense is that consumer preferences and behaviors across Asia have changed and are continuing to change, which means that La Liga officials shouldn't assume anything."

La Liga China director Torrents said that "up until now, we did not have the ability to have this data and information because our agreements were with established broadcasters and as the right holder we neither had control nor visibility."

Since 2019, La Liga has used its own content provider. "La Liga Plus is at the center of our strategy in China," said Torrents. "We are investing heavily in technology and innovation in China to create a digital ecosystem in which we can offer new experiences for our fans while we are also able to access the information and learn on the needs and tastes of our fans."

Since La Liga Plus is a DTC platform, it will also provide the Spanish league operators with real-time data on Chinese viewer habits.

"We launched La Liga Plus a few days ago and the response has been very positive and with high registration numbers, however, we are aware that we just launched and we are pioneering in China and there is a long journey ahead," Torrents said.

A similar scheme was launched in Southeast Asia earlier this year. In April, viewers in Thailand and Indonesia became the first in the world to have access to La Liga Pass, similar to La Liga Plus, which allows local viewers to watch all La Liga matches.

"La Liga Pass is an ambitious project, which we want it to become one of the main ways to watch La Liga alongside our broadcaster," said Ivan Codina, La Liga's managing director for Southeast Asia, Australia, Japan and South Korea. La Liga opened their office in Singapore in 2017.

"So far, the feedback from the fans has been positive," he added.