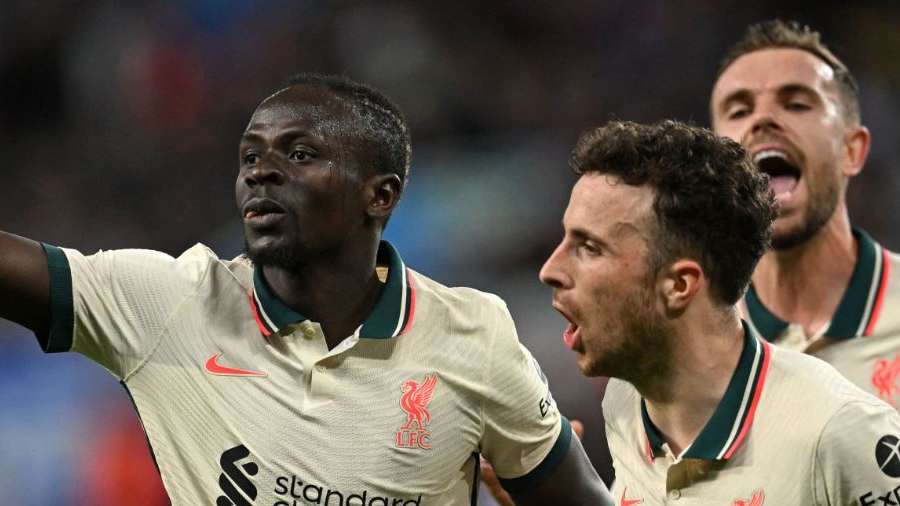 Sadio Mane headed the winner as Liverpool came from a goal down to edge Aston Villa 2-1 on Tuesday and keep alive their hopes of reclaiming the Premier League title from Manchester City.

Any hope of Villa coach Steven Gerrard giving his former club an easy ride was quickly dispelled as his team flew out of the blocks from kick-off in front of a boisterous home crowd.

They took a third-minute lead when Liverpool goalkeeper Alisson spilled a header from Douglas Luiz straight back into the path of the Brazilian forward who fired in from close range, with defenders Kostas Tsimikas and Joel Matip both prostrate.

Juergen Klopp’s side equalised less than three minutes later, when Virgil van Dijk met Trent Alexander-Arnold’s free kick and although Villa keeper Emiliano Martinez managed to get a hand to his effort, Matip poked in the rebound.

The visitors, uncharacteristically nervy, suffered a setback around the half hour mark as defensive midfielder Fabinho was forced off injured, putting his participation in Saturday’s FA Cup final against Chelsea in serious doubt.

However, they recovered and settled down in the second half as Senegalese forward Mane put his side ahead in the 65th minute with a smart header from a Luis Diaz cross.

It was his 15th league goal of the season, the third Liverpool player to reach at least that mark this campaign after Mohamed Salah and Diogo Jota. Villa striker Danny Ings forced some good saves from Alisson in the latter stages and had a goal ruled out for offside with less than five minutes remaining. However, Liverpool held firm to move level with City, for 24 hours at least.

“It was always going to be tough and we have to keep going. We’re in the same position as we were before the game. It was a big game and another three points,” Liverpool captain Jordan Henderson told Sky Sports.

“We concentrate on what we need to do. It is another big game at the weekend, the FA Cup final and we have to recover for that. It is out of our control (the title race), we do not need to waste energy on that.”

Mane said he is happy at Liverpool and trying to enjoy every moment of his time at the club, while speculation about the Senegal forward’s future continues to swirl amid links to Bayern Munich and Barcelona.

Sorting out Mane’s future is a key task for Klopp, who has led Liverpool to success in the league, Champions League, Uefa Super Cup and Club World Cup.

A Pierre-Emerick Aubameyang brace earned Barcelona a 3-1 home win against Celta Vigo on Tuesday, putting Xavi Hernandez’s side on course to secure a spot in the Spanish Super Cup with a second-place finish in La Liga.

Celta ended up playing more than half an hour with 10 men after substitute Jeison Murillo received a straight red card for a foul on Depay. A few minutes later, Barca defender Ronald Araujo received medical attention after suffering a head injury in a collision with teammate Gavi.