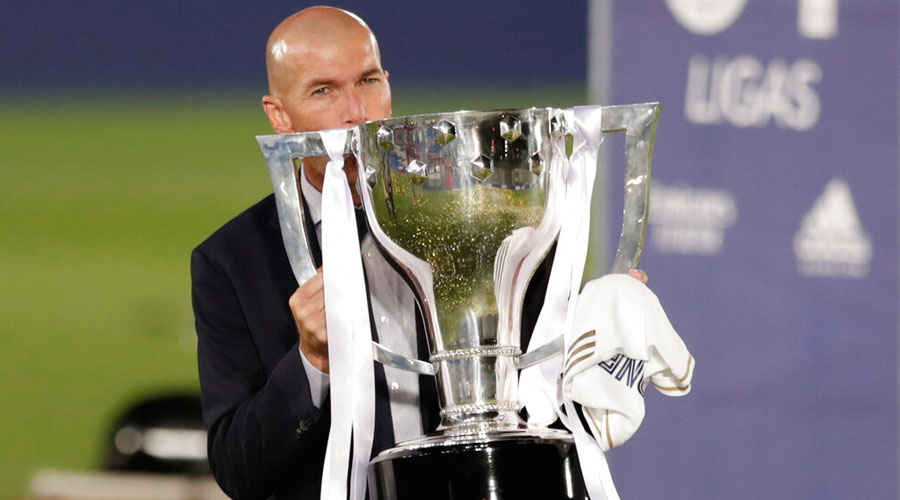 After a humiliating 7-3 loss to rival Atlético Madrid in a pre-season friendly in the United States, Zinedine Zidane insisted his Real Madrid would be just fine once the real competitions began. And he was right. Almost a year after that loss, Zidane and Madrid are celebrating the Spanish league title — the first since Cristiano Ronaldo left to join Juventus.

Madrid sealed their record 34th league title with a 2-1 win over Villarreal at the Alfredo Di Stéfano Stadium on Thursday. The victory left Madrid seven points in front of second-place Barcelona with one round to go.

The embarrassing loss to Atlético came a few months after Zidane was asked to return as coach in March 2019 to try to lift the club from one of its worst crises in years, having been eliminated early in the knockout round of the Champions League and falling out of contention in the Spanish league. Zidane had quit less than a year earlier after leading Madrid to its third straight Champions League title.

It was the 11th trophy for the Frenchman with Los Blancos since taking over as coach for the first time in 2016. The only previous league title was in 2017. Ronaldo left at the end of the following season, and since then Madrid’s only titles have been the Club World Cup in 2018 and the Spanish Super Cup this year.

With his ability to manage egos, Zidane quickly turned things around and got Madrid back to the level it was playing at before he had left. He successfully took advantage of the unplanned pandemic break to guide Madrid to 10 straight victories — the team’s best streak all season.

Players threw the coach into the air during the title celebrations on Thursday. “Zidane has been key for us,” Madrid captain Sergio Ramos said. “He has guided this team. He has shown that he trusts all of his players. That doesn’t happen with all coaches. And we believe in him.”

Key to the team’s success has been the bolstering of the Ramos-inspired defence, which let in 46 goals last season under Julen Lopetegui and Santiago Solari.

“Zidane is a blessing from Heaven above and I hope he stays with us for a very long time,” said Real president Florentino Perez.