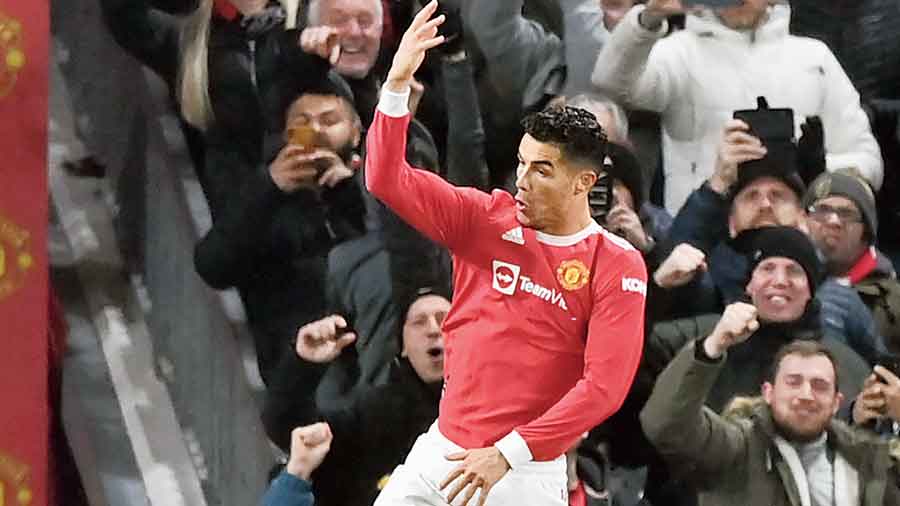 United, with Michael Carrick on the bench as caretaker manager, were watched by their new interim manager Ralf Rangnick and after the match Carrick announced he was leaving the club.

United’s fans paid tribute to Solskjaer before the game with a banner in the Stretford End declaring “20-Legend” — a reference to the Norwegian’s old shirt number. But it was another legend, Ronaldo, who took centre stage during an end-to-end game.

Arsenal took the lead in bizarre fashion in the 13th minute when from a corner United keeper David De Gea went down clutching his foot after he was stood on by teammate Fred and Emile Smith Rowe drilled a shot into the unguarded goal from the edge of the box.

As referee Martin Atkinson had not blown his whistle before the ball went into the net and no foul had taken place, the goal stood.

United’s protests were to no avail but they fought back on to level terms a minute before the interval through a Bruno Fernandes strike after a delightful back-heeled set-up from Fred.

Ronaldo put United in front in the 52nd when Diogo Dalot found Marcus Rashford on the right and the winger’s low cross was clinically converted for the Portuguese forward’s 800th goal.

The Gunners struck back quickly through Martin Odegaard. But Ronaldo notched the winner from the penalty spot after Atkinson went to the pitchside monitor and ruled that Fred had been brought down by Odegaard.

Tottenham Hotspur shook off a difficult week with a confident 2-0 win over Brentford to climb into the top six on Thursday as new manager Antonio Conte enjoyed a second successive league home victory.

Ben Davies’s header deflected off Brentford’s Sergi Canos to give the hosts an early lead and Son Heung-min underlined their superiority when he made it 2-0 in the 65th minute.

A week after an embarrassing Europa Conference League group stage defeat at Slovenian minnows NS Mura and four days after a fruitless trip to Burnley for a game postponed due to snow, Spurs produced their best 90 minutes under Conte.

“It was a good performance against a dangerous team,” Conte said. “I’m happy.”