On the contrary, the German FA insists it values 'freedom of expression' 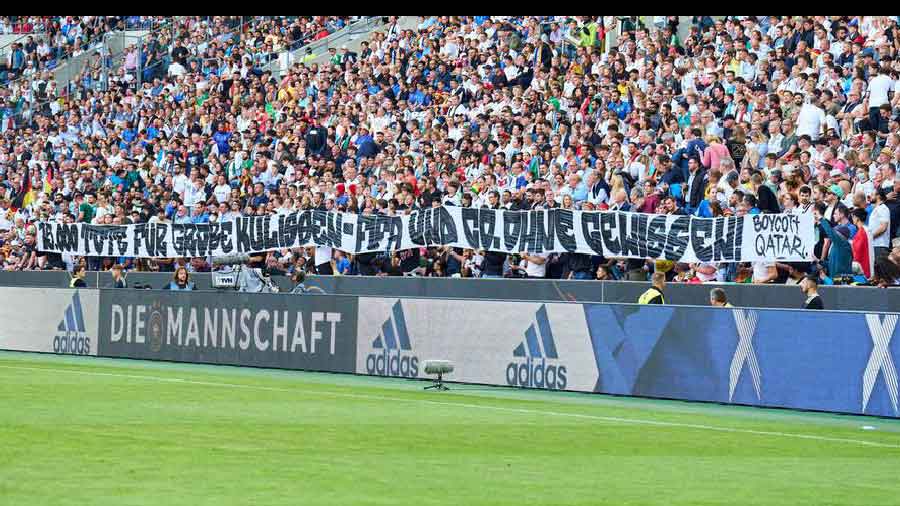 Neither the German Football Association (DFB) nor local police will take any further action against a group of football fans who displayed a banner at a recent Germany game highlighting alleged human rights abuses in Qatar and urging a boycott of the upcoming World Cup in the country.

On the contrary, both the association and the police have stressed that no criminal activity took place and that the whole incident fell under the right to freedom of expression, despite the fans in question being stopped and questioned by police on the night.

Thirty seconds into Germany's Nations League fixture against Italy in Mönchengladbach on Tuesday, 15 fans — ostensibly from the active fan scene of Bundesliga club Borussia Mönchengladbach — displayed the banner on the halfway line and in clear view of the television cameras reading:

The banner was clearly visible for around three minutes, with the commentator for German broadcaster ZDF, Oliver Schmidt, immediately remarking: "A clear and truthful message, and good that it has a place here."

The fans subsequently left the stadium and will not have seen Germany's 5-2 win, but were stopped outside by police, acting on communication from stadium security and the DFB. "The group's behavior raised the suspicion that they had infringed the regulations of the event organizer," local police said in a statement.

Police spokesman Wolfgang Röthgens later clarified to broadcaster Deutschlandfunk that the fans were suspected of accessing that part of the stadium with tickets for the wrong block or with no tickets at all.

This was not the case, with the fans found in possession of tickets costing €70 ($73.50), according to Simon Bender from the Fanhilfe Mönchengladbach — a collective of local legal experts who specialize in assisting football supporters — also speaking to Deutschlandfunk.

"Both the police and the DFB agree that the displaying of this banner had no criminal relevance, but fell under freedom of expression," confirmed the police, adding that they will be taking no further measures.

Nevertheless, the Fanhilfe Mönchengladbach has expressed concern that the fans whose details were taken could be entered into the controversial "Gewalttäter Sport" (sports violence perpetrators) database, which the new German government has pledged to reform.

DFB: 'A critical discourse is necessary'

In a statement of their own, the DFB emphasized that "freedom of expression is a precious asset," adding: "Particularly when it comes to the awarding and staging of the 2022 World Cup in Qatar, the working conditions on the ground, the restrictions on freedom of expression and of the press, and the situation of the LSBTIQ+ community, a critical discourse is necessary.

"German fan culture contributes substantially to this discourse, which we explicitly welcome."

The figure of 15,000 quoted on the banner refers to research by Amnesty International based on statistics from the Qatari authorities which suggest that more than 15,000 non-Qataris died in the country between the awarding of the World Cup to Qatar in 2010 and 2019 — although Amnesty themselves admit that it's impossible to say how many of those people were migrant workers who died due to the conditions on World Cup construction sites.

British newspaper The Guardian reported in February 2021 that more than 6,500 migrant workers from India, Nepal, Pakistan, Bangladesh and Sri Lanka had died in Qatar since 2010.

FIFA and Qatar dispute the figures, saying that "only" 37 World Cup workers have died in the country in that period, and "only" three of those "while at work." They insist that the working and living conditions for migrant workers have improved.

Fan protestsIn May, several German fan initiatives, including fan project coordinators and the nationwide alliance "Unsere Kurve" (our terrace), met in Frankfurt to discuss options to protest creatively against the tournament under the motto "Not our World Cup!"

How many fans in Germany actually boycott the tournament, which takes place from November 21 until December 18, is unclear. Many of Germany's most committed football fans have little interest in the national team, anyway, preferring to focus on their clubs.

Bayern Munich supporters, for instance, have been vocally critical of their club's sponsorship dealings with Qatar, an issue which was raised at a bad-tempered AGM last November.