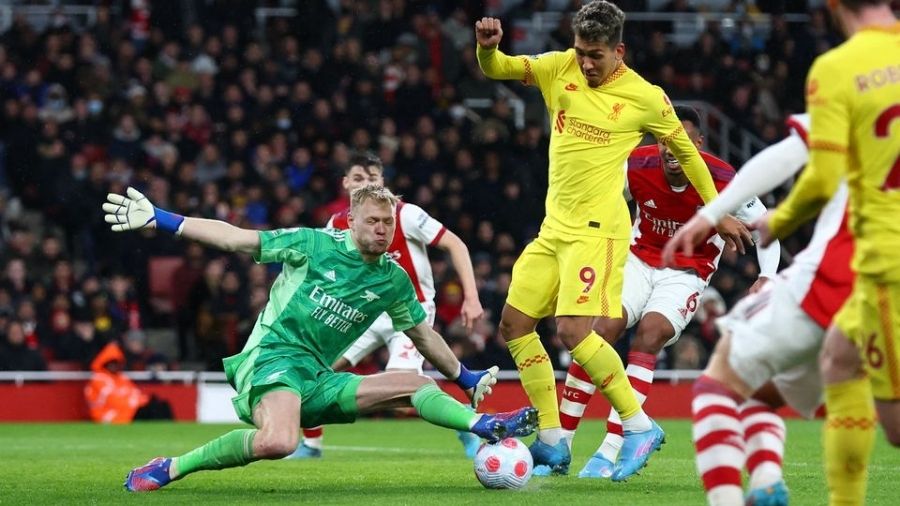 A clinical Liverpool beat Arsenal 2-0 to cut Manchester City's once double-digit lead at the top of the Premier League table to a single point on Wednesday, leaving the title race wide open.

An Arsenal side on a five-game winning run in the league and in fourth place represented a big obstacle to Klopp's title chasers and were the better side in the first half.

But the game tipped decisively early in a frenetic second period as Liverpool extended their own relentless run to nine consecutive league wins.

Their breakthrough came shortly after a misplaced backpass had almost gifted Arsenal a goal, Portuguese Diogo Jota getting ahead of the London side's defence on 54 minutes to beat goalkeeper Aaron Ramsdale at his near post.

Roberto Firmino sewed up a crucial three points eight minutes later, squeezing a shot under the Arsenal goalkeeper again after the hosts had twice failed to clear the ball.

Liverpool's title destiny is now very much in their own hands as they still have to visit City in April.

Manager Juergen Klopp celebrated with the visiting fans at the end.

"We've obviously had a good period. It's what we need. We're one point (behind), but it's still the same. We have to win football matches. We then face City, then all the others.

"Hopefully all the players come back fit from international duty. Then we have an early kickoff against Watford. It's better to be one point behind than 14 points.

"We know we have a special group here and we're trying to squeeze everything we can out of the situation."

While the result was a blow to Arsenal they remain fourth in the table, one point above Manchester United having played two games fewer.

"They really raised the level today but unfortunately games are won in the boxes," he said of his side. "We opened the door and they went to that door and scored two goals."

Arsenal more than matched Liverpool for long periods but the game ultimately swung shortly after the interval.

A misplaced backpass by Thiago let in Martin Odegaard who looked poised to score but Alisson made a superb save.

Minutes later Jota fired the visitors ahead to knock the stuffing out of the hosts.

Firmino, who came off the bench along with Mohamed Salah who surprisingly did not start, then produced a neat flick to convert Andy Robertson's cross after Arsenal were guilty of not getting the ball clear on several occasions.

"I saw a hard-working team in the first half and in the second half we enjoyed it more and that was when we really stepped up," Klopp said. "We really want to enjoy the situation we are in by winning football matches."