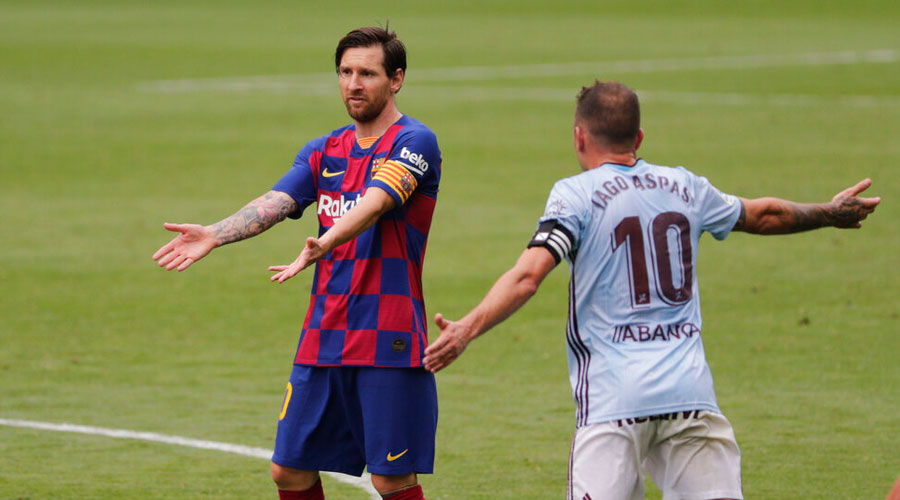 FC Barcelona captain Lionel Messi has been seen appearing to ignore Quique Setien’s assistant Eder Sarabia during the Spanish League match against Celta Vigo which ended 2-2 on Saturday.
And on Sunday, Real Madrid went two points clear after recording a 1-0 victory at Espanyol with Casemiro scoring the winner.

The troubles on the pitch for Barca come amid reports of a fall-out between the players and coaching staff. Messi appeared to add fuel to the fire as he seemed to turn his back on Sarabia while the coach was giving instructions.

In the video footage, Messi approaches the sideline during a hydration break in the second half of the match. Sarabia can be seen as he appears to try to get Messi’s attention.
But Messi just turns around and walks back onto the pitch.

Spanish outlet Marca reported that the frustration spilled onto the dressing room after the match with some Barcelona stars criticising Setien’s tactical decisions.

“It’s true that you often have arguments with players and that’s nothing new,” coach Setien told a virtual news conference on Monday. Barca play Atletico Madrid on Tuesday.

Madrid, however, continued to move forward. Karim Benzema produced an audacious back-heeled assist for Casemiro to score. The Brazilian midfielder slid to the ground to guide the ball home on the stroke of half-time.

Holders Manchester City reached the FA Cup semi-finals after goals from Kevin de Bruyne and Raheem Sterling secured an untroubled 2-0 win at Newcastle. City conceded the Premier League title to runaway champions Liverpool last week, and must beat 13-time FA Cup winners Arsenal to reach another cup final.
Chelsea will face 12-time winner Manchester United in the other semi-final. The ties will be played on July 18-19 at Wembley with no fans.