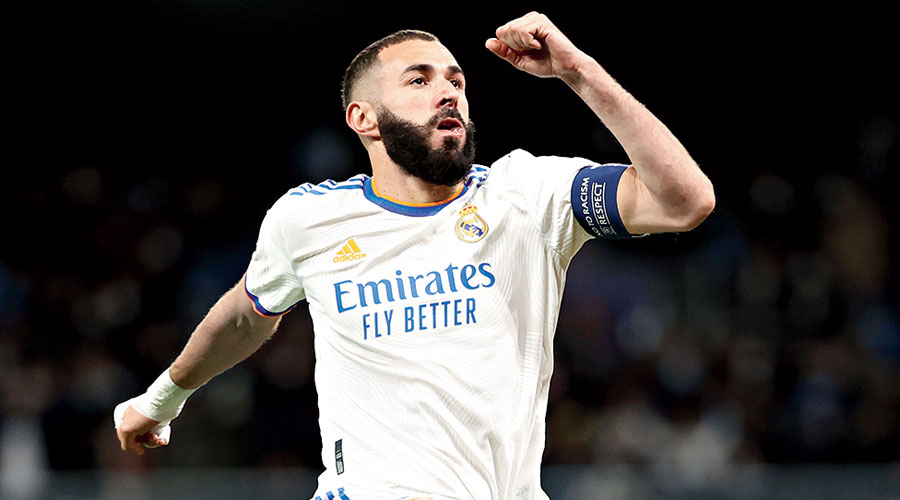 Carlo Ancelotti sees so much more being provided by the 34-year-old forward he compares to a fine wine. “He is more of a leader every day,” the Madrid coach said after Benzema’s goals produced a 3-1 victory over Chelsea in the quarter finals at Stamford Bridge on Wednesday.

“He feels more and more important in this team and I think that’s what makes the difference. He has so much more personality. He is an example for everyone.”

Benzema now has 37 goals in 36 games in all competitions this season, including the three that turned around the last-16 meeting with PSG. “They’re magic nights,” Benzema said. “Today (Wednesday) we came out to win, to show we’re Real Madrid. Things worked out well for us as we played well, from the first minute to the last.”

The France international is almost single-handedly keeping the Spanish giants on the path to a record-extending 14th European Cup — and a fifth for himself — and powering them to regaining the La Liga title. Of Madrid’s last 11 goals, 10 have been scored by the mainstay of the team for the last 13 years.

The first two at Stamford Bridge were thumping headers inside three first-half minutes in the driving rain, while the third was gifted to him in a manner that raised doubts about whether Chelsea can muster a comeback in Madrid on Tuesday.

“I think it helped us that our build-up play from the back was good,” said Ancelotti, who won the 2010 Premier League with Chelsea. “We found space between the lines. And then with Benzema and Vinicius we were dangerous.”

Chelsea had given themselves hope of recovering when Kai Havertz reduced the deficit with a header five minutes before half-time from Jorginho’s cross. But only a minute of the second half had elapsed when Chelsea’s slack defending proved so costly.

Edouard Mendy was about 30 yards out from goal when the ball came to him and the goalkeeper brought it down with his chest. Rather than clearing down the field, he sent a short pass tamely to the dawdling Antonio Rudiger. It was a gift for Benzema to intercept before striking into the unprotected net with Mendy still stranded outside the penalty area.

“I’m happiest to have scored the third,” he said, “as I missed one in the first half and I was thinking about that chance because it’s very important to score goals. Then I got another and I’m very happy.”

Villarreal pulled off another surprising Champions League result, this time against sixth-time champions Bayern Munich to boost their hopes of returning to the semi-finals for the first time in 16 years.

After making it past the group stage and eliminating Juventus in the round-of-16, the modest Spanish club took a big step toward reaching the last four by holding on to a 1-0 victory against favourites Bayern.

Arnaut Danjuma’s goal early in the first half was enough for Villarreal at the La Ceramica Stadium, with Bayern unable to get past the solid defence of Unai Emery’s squad and losing only for the second time in 30 Champions League matches.

The Germans struggled throughout the match on Wednesday and were glad to leave only one goal down. “We’ll take the 1-0 result,” veteran Thomas Mueller said. “We know that things could have been a lot worse.

“We have to pay a lot of respects to our opponents. Now we need to pick ourselves back up for the return leg and hit back.”

Villarreal thought they had doubled the lead in the 41st but Francis Coquelin’s goal from a tough angle was disallowed for offside. Striker Gerard Moreno twice had opportunities to add to Villarreal’s lead after that.

First with a low shot from outside the area that hit the post in the 53rd, and 10 minutes later after intercepting a bad pass by Bayern goalkeeper Manuel Neuer near midfield and missing his long-range shot into the open net. The ball ended up curling too much as Neuer desperately tried to run back into position.

Everton’s run of 68 years in the English top flight is in real danger of ending after they slumped to a 3-2 defeat at Burnley on Wednesday leaving manager Frank Lampard grasping for answers.

Everton have won two of the nine games since Lampard was brought in to secure their top-flight survival after Rafa Benitez was sacked. The Merseysiders gave up a 2-1 lead in the second half with an awful defensive mistake from Ben Godfrey helping the Clarets create an 85th minute winner converted by Maxwel Cornet. (Reuters)