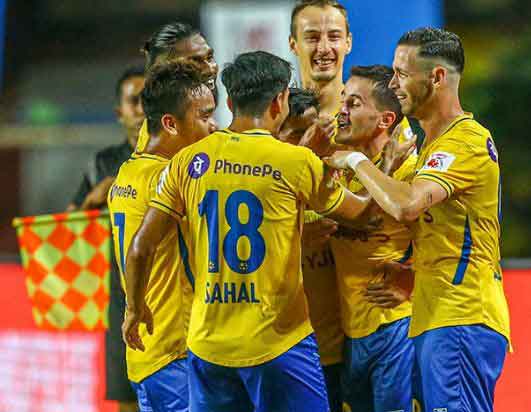 Adrian Luna scored a stunner but could not ensure full points for Kerala Blasters as FC Goa fought back in their ISL VIII match at the Tilak Maidan Stadium in Vasco on Sunday. The match ended 2-2.

Jeakson Singh (10th) opened the scoring for the Blasters with Luna scoring a wonderful goal in the 20th minute. Blasters be looked on top, before Goa came back to first make it 2-1 riding a Jorge Ortiz (24th) strike before Edu Bedia scored in the 38th minute.

Blasters are now placed third in the points table with 14 points from nine games while Goa remain ninth with nine points from nine outings. Blasters were off to a perfect start, nosing ahead in just 10 minutes, after Luna swung in a corner for Jeakson to head home.

For Goa, Glan Martins smashed a volley from long just over the bar, against the run of play.

Blasters went 2-0 up soon after, Luna showing his brilliance this time. The Uruguayan was given space on the left inside channel and the 29-year old made merry, getting the ball to dip past the ’keeper from 30 yards out. The ball hit the post and went in leaving Dheeraj Moirangthem with no chance to keep it out.

Pegged back twice in quick succession, Goa picked themselves up riding Ortiz’s strike. The Spaniard received a ball from Saviour Gama, turned sharply and firing home past Prabhsukhan Singh Gill who was beaten at the near post.

Blasters came close to making it 3-1 near the halftime whistle when Sahal Abdul Samad shot over the bar off a cross from Alvaro Vazquez.

Goa drew level from the next attack, and it was Bedia who got in the act curling in an exquisite corner that went in leaving Gill high and dry. A frantic first half came to an end with the sides level at 2-2.

ATK Mohun Bagan had suffered in his absence and coach Antonio Lopez Habas has lost his job. If everything goes well, the deal could be completed by Monday. ATK Mohun Bagan have won two consecutive matches under new coach Spaniard Juan Ferrando. Subhasish Bose is doubtful for Wednesday's match against Hyderabad FC after picking up an injury against FC Goa.