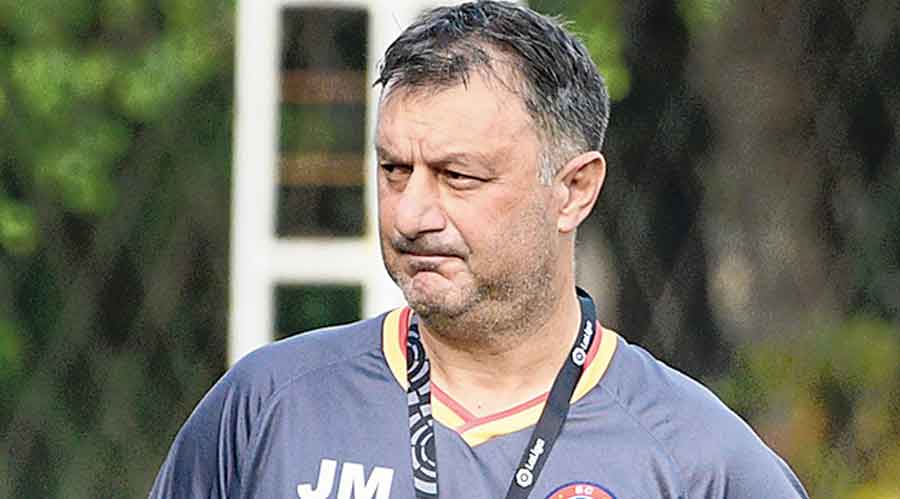 SC East Bengal are not happy with the ISL VIII fixtures. They are playing four matches in 11 days and, according to a source, that has not gone down well with the team management.

“There is hardly any time to recover and chances of picking up injuries are always there. We voiced our reservations when the fixtures were being drawn but to no avail. Life in a bio-bubble is already strenuous and now the fixture congestion has added to our woes,” the source told The Telegraph on Monday.

Coach Jose Manuel Diaz, at the pre-match news conference, also rued the lack of recovery time. The Spaniard is set to ring in changes for the Odisha FC match to be played at Tilak Maidan in Vasco, but said that has nothing to do with the abject capitulation against ATK Mohun Bagan.

“We have to make changes to the team that played against ATK Mohun Bagan because the starters had only one day to recover,” he said.

Goalkeeper and captain Arindam Bhattacharya will miss the match due to an injury he picked up on Derby day and Suvam Sen, who was impressive coming in for Bhattacharya, will be under the SC East Bengal bar. Defender Adil Khan, who also came in as a substitute against ATK Mohun Bagan and effected a timely tackle to deny Roy Krishna his second goal of the match, may also get a start. There is also a chance of Hira Mondal coming in place of Bikash Jairu on the left.

“We choose the best eleven for SC East Bengal. Everyone in the squad will get an opportunity going forward,” Diaz said.

SC East Bengal frontliners failed miserably in the last match but the coach defended them. “Our strikers didn’t get enough opportunities because the team didn’t play well enough to create chances,” he said.

In their last meeting — on February 27 — Odisha FC had won 6-5. East Bengal had to face the ignominy of conceding six goals for the first time in 40 years against an Indian team. Under coach Robbie Fowler, SC East Bengal’s debut ISL season truly went from bad to worse.

Coach Kiko Ramirez, however, is not taking SC East Bengal lightly. “It is a wounded team. They lost the last game and will come with a target to win and it makes the match tough and difficult,” the 51-year-old said.