David de Gea bailed his side out with several fines saves, the best of which denied Manu Trigueros a goal 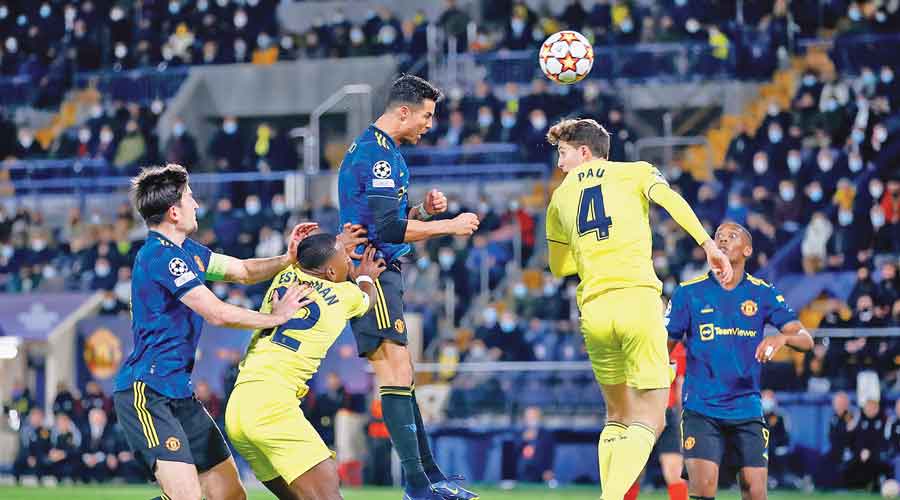 Late goals from Cristiano Ronaldo and Jadon Sancho were enough to earn an under-whelming Manchester United a 2-0 victory at Villarreal on Tuesday and that guarantees them a spot in the Champions League knockout stage.

United came into the contest knowing victory would see them through to the last 16 with one group match left to play, but in Michael Carrick’s first game as interim manager, United looked shorn of ideas in attack in the Estadio de la Ceramica.

The home side had much the better chances, with United goalkeeper David de Gea bailing his side out with several fines saves, the best of which denied Manu Trigueros a goal.

Out of nowhere, however, a poor pass from Villarreal ’keeper Geronimo Rulli, that was mis-controlled by Etienne Capoue, gave United the first goal. Ronaldo seized the loose ball and lofted it over the stranded Rulli to give United the lead in the 78th minute.

As the home side pressed for an equaliser, the visitors countered in the 90th minute with Sancho hammering home to put the game to bed and send United top of Group F with 10 points, three ahead of Villarreal, who can no longer catch Carrick’s side due to their inferior head-to-head record.

Bayern Munich, missing half a dozen players to Covid-19 quarantine, edged past Dynamo Kyiv 2-1 to secure top spot in  Group E with a game to spare.
First-half goals from striker Robert Lewandowski, who struck with a spectacular 14th-minute overhead kick, and Kingsley Coman three minutes from half-time and amid heavy snowfall, put the German champions in front.