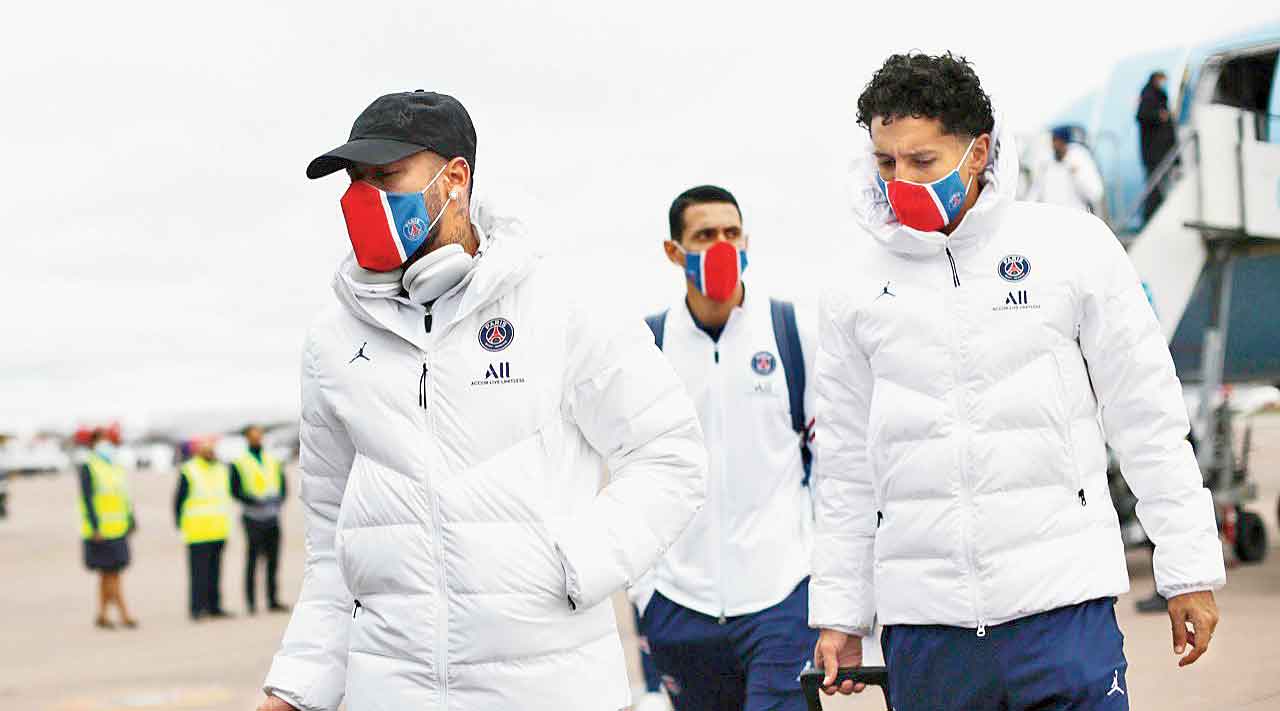 Paris Saint-Germain players arrive in Manchester ahead of their Champions League match against Manchester City
Twitter
Reuters   |   Published 24.11.21, 01:28 AM

Manchester City are determined to return to the Champions League final and will use their disappointment of losing last season’s showpiece as motivation, midfielder Ilkay Gundogan said on Tuesday.

City reached their first ever Champions League final in May but lost 1-0 to Chelsea, with Gundogan collecting his second runners-up medal having been on the losing Borussia Dortmund side in 2013.

Pep Guardiola’s side can reach the last 16 of this season’s competition on Wednesday when they welcome Paris St Germain in their Group A clash and Gundogan said he is itching to go all the way this time.

“Having that game of the final last season still in our minds will give us some more motivation — even though it’s not needed. Once you’ve been in the final you always want to go back,” the German told a news conference.

PSG won their home match against City 2-0 in September. But Guardiola’s side have won all their other games so far and top the group on nine points, one ahead of the French club, in their bid to secure a favourable draw in the next round.

Former Barcelona boss Guardiola knows all too well the threat posed by PSG’s Lionel Messi and said the Argentine forward was still unplayable at the age of 34. “It’s so difficult. Sometimes when he has the ball, you don’t know what to do — not even he knows,” Guardiola said. “I’m so happy he’s still playing and the level he plays and the quality.”

For PSG, defender Sergio Ramos is primed to play his first match in over six months on Wednesday.

The Spaniard joined PSG in July on a free transfer after ending a 16-year career with Real Madrid but has been unable to play due to a long-running calf injury which led to him missing most of the previous season and Spain’s Euro 2020 campaign.

Mauricio Pochettino’s side are second in Group A with eight points, one behind City with two games remaining. Victory would clinch the French club’s place in the next stage while defeat would end their hopes of finishing top of the group and being seeded for the last-16 draw.

Liverpool expect Porto to be highly motivated for Wednesday’s Champions League group stage meeting and will not take their opponents lightly despite having qualified for the last 16, manager Juergen Klopp said on Tuesday.

Liverpool, seven points ahead of second-placed Porto in Group B, were comfortable 5-1 winners in the away fixture in September. Porto would like to avenge that defeat.

“We know our opponent will be motivated on the highest level for two main reasons. One, we won there in a way that they didn’t like... and on the other hand if they win they have the final game of the group against Atletico Madrid,” Klopp told reporters.

Atletico trail Porto by a point and face AC Milan, who sit bottom with one point, in Wednesday’s other Group B clash.

Real Madrid forwards Eden Hazard and Gareth Bale have been left out of the squad for their Champions League group match at Sheriff Tiraspol, the La Liga club said.

Manager Carlo Ancelotti said on Saturday Hazard was suffering from gastroenteritis, while Bale picked up a knock last week while on international duty with Wales.

Both players missed Sunday’s 4-1 league win at Granada, which moved them a point clear at the top of La Liga.