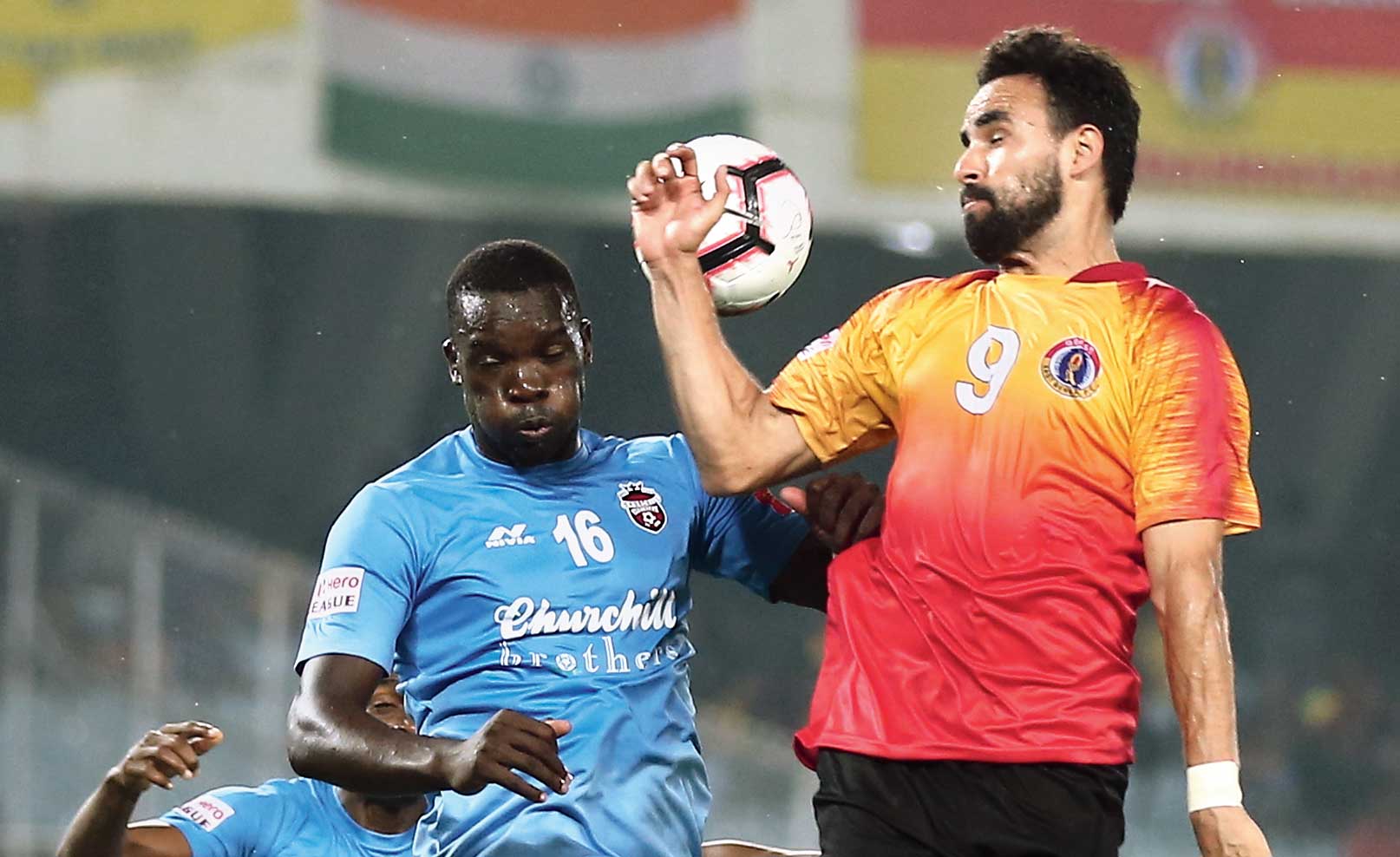 Quess East Bengal strived hard to make it their fantastic fifth. But Willis Plaza, a dogged Churchill Brothers and an off-colour Joby Justin spoiled the day.

The match thus ended 1-1 at the Salt Lake Stadium on Sunday. East Bengal moved up to the second spot in the I-League standings with 32 points. But that would probably last just 24 hours as Real Kashmir FC look set to gain three free points, given Minerva Punjab’s stance regarding not playing in Srinagar.

Minerva forfeiting the game would mean East Bengal slip back to third, while Real Kashmir will regain the No. 2 spot. East Bengal and Churchill lined-up to observe a minute’s silence as a tribute to the victims of the Pulwama terror attack.

At the end of the match, Plaza was seen leaving the stadium alongside Joby, heading for his former teammate’s home. One couldn’t read much into the expressions of the two players then, but on the field, they certainly were two different tales.

Plaza, in the first half, earned his team a couple of good chances before he himself was on target midway after the breather. Nicholas Fernandes floated in a long ball — to which Lalrindika Ralte didn’t react although he was close to it — and that found Plaza, who, despite being challenged by his marker Borja Perez, tapped the ball home past an advancing Rakshit Dagar.

The 68th-minute strike left the 43,000-odd turnout stunned, while also leaving East Bengal with a message that they could perhaps have been a little more patient in their dealing with the Trinidadian.

Joby, who’s been a vastly improved player under Alejandro Garcia, hardly had any shot on target. All he had to show for in the game was a set-up for Enrique Esqueda just after the half-hour mark, which sailed over the crosspiece. Barring that, there were erroneous passes from Joby, while his receiving too left a lot to be desired.

Fortunately for East Bengal, MoM Ralte, who seems to have rediscovered his mojo when it comes to taking free-kicks, unleashed one that brushed Kassim Aidara’s head on its way into the goal. Courtesy the superb 79th-minute curler, East Bengal equalised and managed at least a point and that still keeps their title hopes alive.

A defeat at this stage, especially after winning four matches on the trot, would have been a major setback for Alejandro and his wards.

The Churchill ’keeper too has to be credited for his wonderful ‘save’ moments before the half-time whistle, parrying over the horizontal Antonio Dovale’s attempt off Enrique’s centre after a wonderful move initiated by Aidara.

Precisely, there was very little to write home about East Bengal’s performance in the first half as Churchill just didn’t allow them enough space and room to operate inside the 18-yard circle, blocking most of the crosses and floaters.

Alejandro made a double change early in the second half, replacing Dovale with the not-fully-fit Jaime Colado and bringing in Brandon Vanlalremdika in place of Laldanmawia Ralte, who too had a disappointing game. But they looked to be in some control only after the scores were level.

Another worry for East Bengal would be Johnny Acosta’s absence from their next match for back-to-back yellow cards.