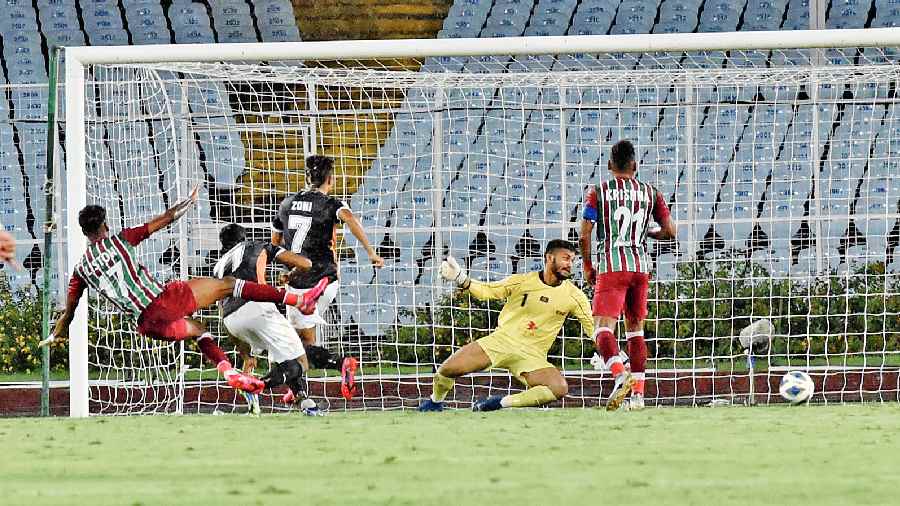 Liston Colaco’s hat-trick gave ATK Mohun Bagan a chance to qualify for the Inter-Zone semi-finals as they thrashed Bashundhara Kings of Bangladesh 4-0 in an AFC Cup group D game at the Salt Lake Stadium on Saturday.

Australian striker David Williams, who came on as a substitute for Joni Kauko, scored the other goal for the Juan Ferrando-coached side.

Heavy winds lashed the stadium as soon as the game began. Referee Chen Hsin-Chuan allowed the match to continue till the 12th minute but they had to stop owing to the weather.

The match was halted for 51 minutes but during that time Ferrando came to the ground to inspect the condition. It showed the urgency he and his side had to win the game.

In the 24th minute, Liston scored the opening goal when he latched onto an opportunity handed by Bashundhara defender Bishwanath Ghosh who fumbled in clearing the ball inside the box.

The home side then piled pressure on the opponent’s defence. ATK Bagan didn’t have to do much for the second goal of which Kauko was the architect. He gave a through pass, which split Bashundhara’s defence. Liston received the ball, rounded Bashundhara goalkeeper Ansiur Rahman and put the ball into the empty net in the 33rd minute.

Liston, 23, completed his hat-trick scoring from a Manvir Singh cross in the 53rd minute. This goal gave relief to the 34,595 fans who had come to the ground to witness the win of their favourite team.

Williams scored the fourth goal for ATK Mohun Bagan in the 77th minute.

The home team’s defence was not up to the mark in the previous match against Gokulam Kerala FC. But against Bashundhara, it looked composed. A fit-again India central defender Sandesh Jhingan was back in action after a long injury layoff. Carl McHugh did well as a defensive blocker. Subhasish Bose, Pritam Kotal and Prabir Das all did a decent job as Bashundhara failed to create too many opportunities in front of ATK Mohun Bagan’s goal. The young goalkeeper, Arsh Anwer, also had a good outing, making some brilliant saves.

Bagan coach Ferrando sounded happy with the performance of his players. “Everybody gave their best and the hard work paid off for us. I am happy with the result,” the Spanish coach said.

“In the first 10 minutes of the game we were not able to take complete control but then things worked well for us.”

After the win against Bruzon’s side, Ferrando replied: “Every team should respect their opponent.”