Football ideals that rocked the world 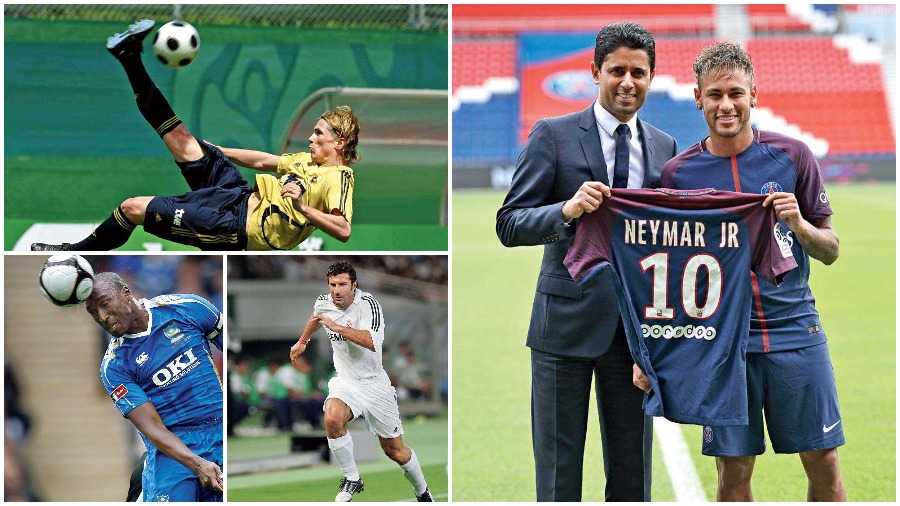 Neymar is visibly overjoyed to have his good friend Messi at PSG after four years of separation between the pair. But back in the summer of 2017, the Brazilian seemed quite willing, perhaps even desperate, to step out of Messi’s shadow at Barcelona and build his own empire. After weeks of topsy turvy negotiations, Messi and Luis Suárez trying to persuade Neymar to stay, and Gerard Piqué confirming that Neymar will stay at Barcelona, Neymar left. In some style, too. Neymar’s switch to PSG for an astronomical fee of 222 million euros did not just break the world transfer record, it shattered it.

Selling arguably the finest No.9 in the world for a paltry sum of six million euros would have been a cardinal sin in itself. Barcelona went and made it worse in the middle of a pandemic-ravaged 2020 by selling to title rivals Atletico Madrid. Sidelined by new manager Ronald Koeman and given the impression that he could no longer cut it at the top level, an enraged Luis Suárez exchanged Blaugrana for the red and white of the capital side and became the gamechanger for Diego Simeone’s troops en route to sealing their first La Liga crown since 2014.

If a single Premier League title has ever hinged on one man, it has to be the 2012-13 title, the last one won by Sir Alex Ferguson. The man in question is, of course, Robin Van Persie, who left Arsenal irate with his quest for silverware in Manchester. Ferguson apparently told his dressing room that should they sign the Dutchman, glory would be theirs. And so it was, as easy as that. The 25 million pounds spent on Van Persie received an instant return on investment as the striker spearheaded United to a scintillating 20th top-flight championship.

Few Premier League strikers earned the unconditional love of Liverpool supporters in the way that Fernando Torres did during his time at Anfield. Imagine then the agony of the Kop when it was revealed that Torres would be moving to Chelsea in the winter of 2011, a club that Liverpool despised almost as much as Manchester United. In a deal that saw him become the most expensive signing in British football history at the time, Chelsea splashed out 50 million pounds to secure Torres’s signature.

On the same day that the Abu Dhabi United Group took over Manchester City, the Sky Blues completed the signing of dynamic Brazilian forward Robinho for 32.5 million euros. But what is so shocking about that? Two things. First, it was fellow Brazilian Ricardo Kaká that City actually wanted, but talks fell through with AC Milan at the last moment. After briefly dreaming of bringing in Messi, City went with the more realistic option of Robinho as a marquee acquisition. This is where the second shock comes in. Robinho agreed to come to Manchester City thinking he was registering with Manchester United, only to find out that there was a second club in Manchester who had paid for his services!

FROM ICON TO OUTCAST

Nobody epitomised the Barcelona of the early 2000s better than Ronaldinho. Delectable dribbles, a bagful of tricks, and a megawatt smile, Ronaldinho was enjoying life in Spain until Pep Guardiola was promoted to manage the first team in 2008. Guardiola showed little regard for Ronaldinho’s reputation and deemed him surplus to requirements, citing his indiscipline and partying tendencies as inexcusable. From a virtually untouchable part of the Barcelona furniture, Ronaldinho was reduced to dead wood, before Milan snapped him up for 25 million euros.

For months leading up to the 2006-07 campaign, it seemed that Ashley Cole’s aspirations to find his way out of a deteriorating Arsenal team had reached a dead end. Cole had signed an unlikely extension that appeared to keep him at the Emirates for the near future. But then something happened, as it always seems to do in the turbulent ecosystem of football transfers. Arsenal’s cross-town rivals Chelsea lured the North Londoners with the prospect of a swap deal involving William Gallas and Cole. In a rude shock for Arsenal fans, Arsène Wenger and Co. assented. Cole went off to Chelsea to enjoy the most successful spell of his life, while Arsenal took one step closer to drowning in self-pity.

Rewind to the summer of 2001 and only untimely showers felt more predictable in North London than Sol Campbell staying at Tottenham. After all, the formidable defender had gone out of his way to assure Spurs fans that he would not leave. Then he did just that — leave. Of all places, Campbell chose Arsenal in what has to be the most unpopular free transfer in English football history.

A “REAL” STAB IN THE BACK

That is what it must have felt like to be Barcelona in the summer of 2000. Not only did Real Madrid snatch Barca’s brightest talent in Portuguese playmaker Luis Figo, but they did so under circumstances that suggested both Barca and Figo had been taken in. All courtesy of the mastermind that was (and still is) Madrid president Florentino Pérez. For an eye-popping amount of 62 million euros, Figo landed up at Real to kick-start the Galactico era and take the bad blood between arch rivals Barca and Madrid to unprecedented heights.

Perhaps no other signing (with the exception of Cristiano Ronaldo) made by Sir Alex Ferguson at Manchester United has been as transformative as that of Frenchman Eric Cantona. Completed in November 1992 for a little over a million pounds, Ferguson bought Cantona out of nowhere. Leeds had enquired about buying Denis Irwin from Man United, but when that did not work out, Leeds, much to United’s surprise, ended up offering Cantona to the Old Trafford club. United acted in the way they know best — fast and furious — and made Cantona a Red Devil in what Ferguson later called “the quickest transfer of my career”.