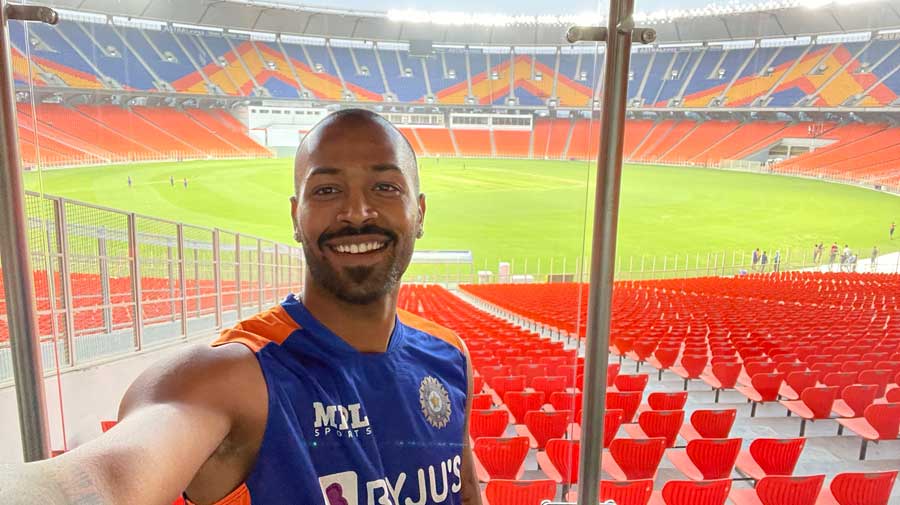 The refurbished Motera Stadium in Ahmedabad looks like palette, it’s colourful seating arrangement painting a pretty picture. But from a cricketing point of view, all that matters is what colour (of soil) and nature will the 22-yard strip in the middle sport when the third Test of the India-England series begins there on February 24.

The upcoming game is a pink-ball Day-Night affair and that certainly adds to the intrigue.

According to sources, both the remaining Test matches will be played on tracks that will offer more turn and aid spinners as the hosts eye a World Test Championship final berth.

“Both type of pitches, red as well as black soil, are there at Motera. India seem intent on playing on a wicket offering more turn — like the one in Chennai during the previous game — keeping in mind the World Test Championship final berth,” someone in the know of things told The Telegraph.

“Red soil helps to get that extra turn and enables spinners to trouble batsmen further. Things haven’t been finalised yet, but there’s a possibility of using the pitch with red soil.”

But in most of the pink-ball Tests so far, the wickets had been prepared in a such way that there was less wear-and-tear of the seam and colour of the pink ball. In the process, those wickets aided seamers more than the spinners. So, won’t preparing a rank turner with minimal or no grass affect the condition of the ball?

The source disagreed. “The seam of the pink SG ball is more pronounced than that of the Kookaburra. Besides, the leather quality of the balls that will be in use in this Test will be of superior quality than those that were prepared for the Day-Night Test at Eden Gardens (in November 2019).”

The hardness of the wicket will also be a key factor in this case, said Sanspareils Greenlands (SG) marketing director Paras Anand.

“If the wicket is not too hard but still facilitates a fair amount of spin, it should make no difference as such to the quality of the ball. In other words, if the pitch isn’t hard and abrasive, the ball should not be affected,” Anand pointed out.

“Only the final there was held on a red-soil wicket, which was a bit on the damp side… It had quite a bit of turn which made shot-making difficult. Batsmen were in two minds,” said Smit Patel, who represented Baroda in the tournament final versus Tamil Nadu.

The pitch in Chennai for the second Test triggered debates. It will be interesting to see what Motera has to offer.