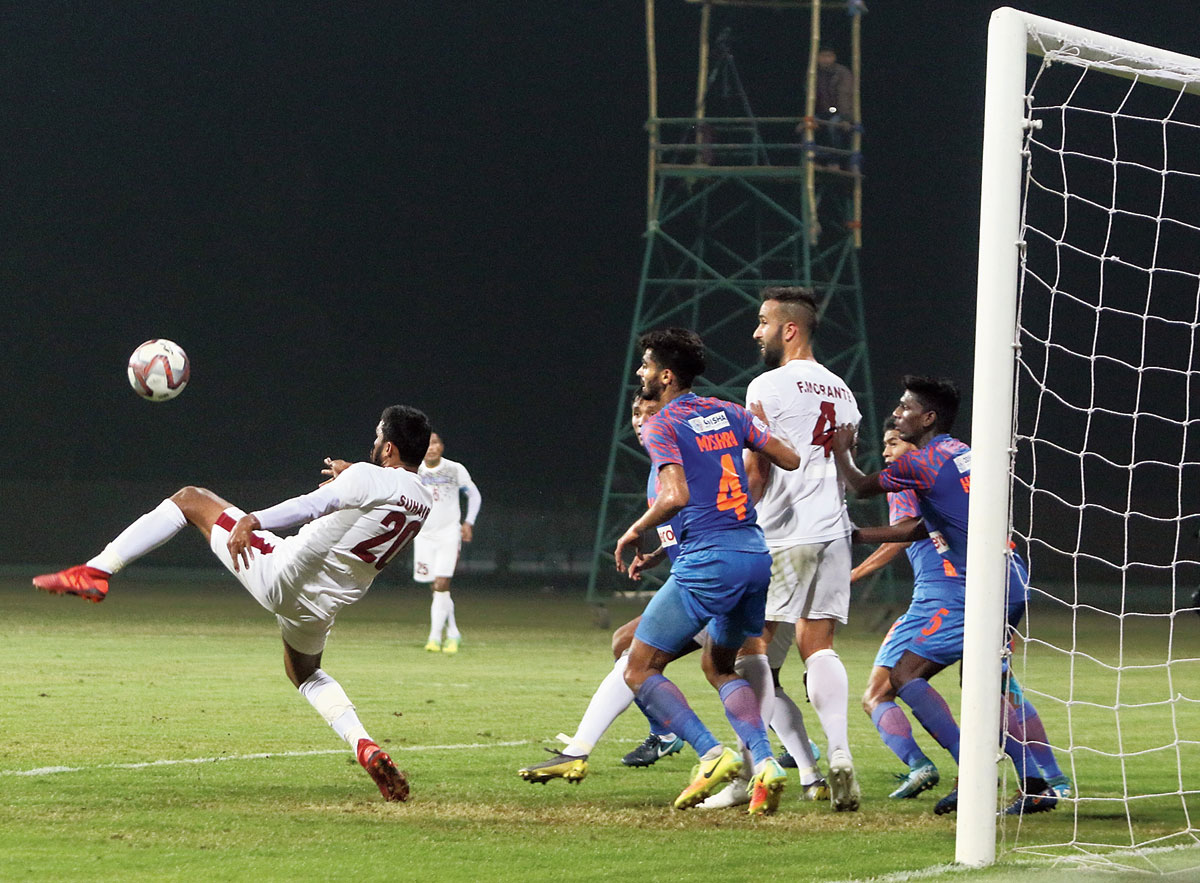 Mohun Bagan registered their fourth win on the trot in the on-going I-League. On Thursday at the Kalyani Stadium, they defeated Indian Arrows by a solitary goal.

The victory helped the hosts to regain the pole position with 13 points from six matches.

Bagan coach Kibu Vicuna decided to go with the same starting eleven which played against Real Kashmir FC, and the hosts started putting pressure on the Indian Arrows defence right from the word ‘go’.

They got the first goal in the 18th minute thanks to defender Daniel Cyrus’s super strike. Dhanachandra Singh’s throw-in found an unmarked Nongdamba Naorem. The midfielder’s snap shot hit Bikash Yumnam and the loose ball fell to Cyrus. The Trinidad and Tobago player didn’t waste any time and his left-footed volley from 20 yards hit the back of the net.

VP Suhair could have doubled the lead but his shot was brilliantly saved by Arrows goalkeeper Lalbiakhlua Jongte .

In the first half, Bagan got two more chances but the hosts were unable to convert those.

After the change of ends, Bagan players didn’t show much urgency to increase the lead. Though they got two easy chances — Cyrus’s shot hit the crosspiece and Fran Morante’s header hit the woodwork.

Referee Priyobarta Singh’s inept refereeing also cost Bagan dear. Around the hour-mark — an Arrows defender handled the ball inside the box but the referee didn’t give a penalty. A minute later, Arrows goalkeeper Jongte came outside the box and collected the ball. This time also the referee turned a blind eye.

The All India Football Federation’s development side got their first chance in the 51st minute. All Manvir Singh had to do was to prod the ball inside the Bagan goal, but he failed.

In the final quarter, Arrows went all out for the equaliser. They came close in the dying moments but Papa Diawara’s timely clearance saved the day for Bagan. Striker Diawara didn’t score but that save secured three points for green and maroon brigade.

Tajikistan forward Komron Tursunov, who was in the squad, didn’t get a chance to play. Bagan next play at Punjab FC on January 14 and hopefully Vicuna would give him some match-time.

Cyrus, who was named Man of the Match, sounded happy. “Best goal of my career. I dedicate the goal to my friend Shahdon Winchester, who also played for the national team.”

Winchester died in a car accident on December 19. Vicuna agreed they won a tough game. “We are very happy because we knew this match would not be easy. Specially after those five gruelling days in Kashmir. “Arrows fought very hard. I thought the first half was one of the best first halves we have played till now. Let’s enjoy this victory. These are very important three points for us.”

Vicuna said Diawara would fire soon. “He is a very good player. He didn’t play in the last four-five months and he needs time. It’s a matter of time before he starts scoring.”