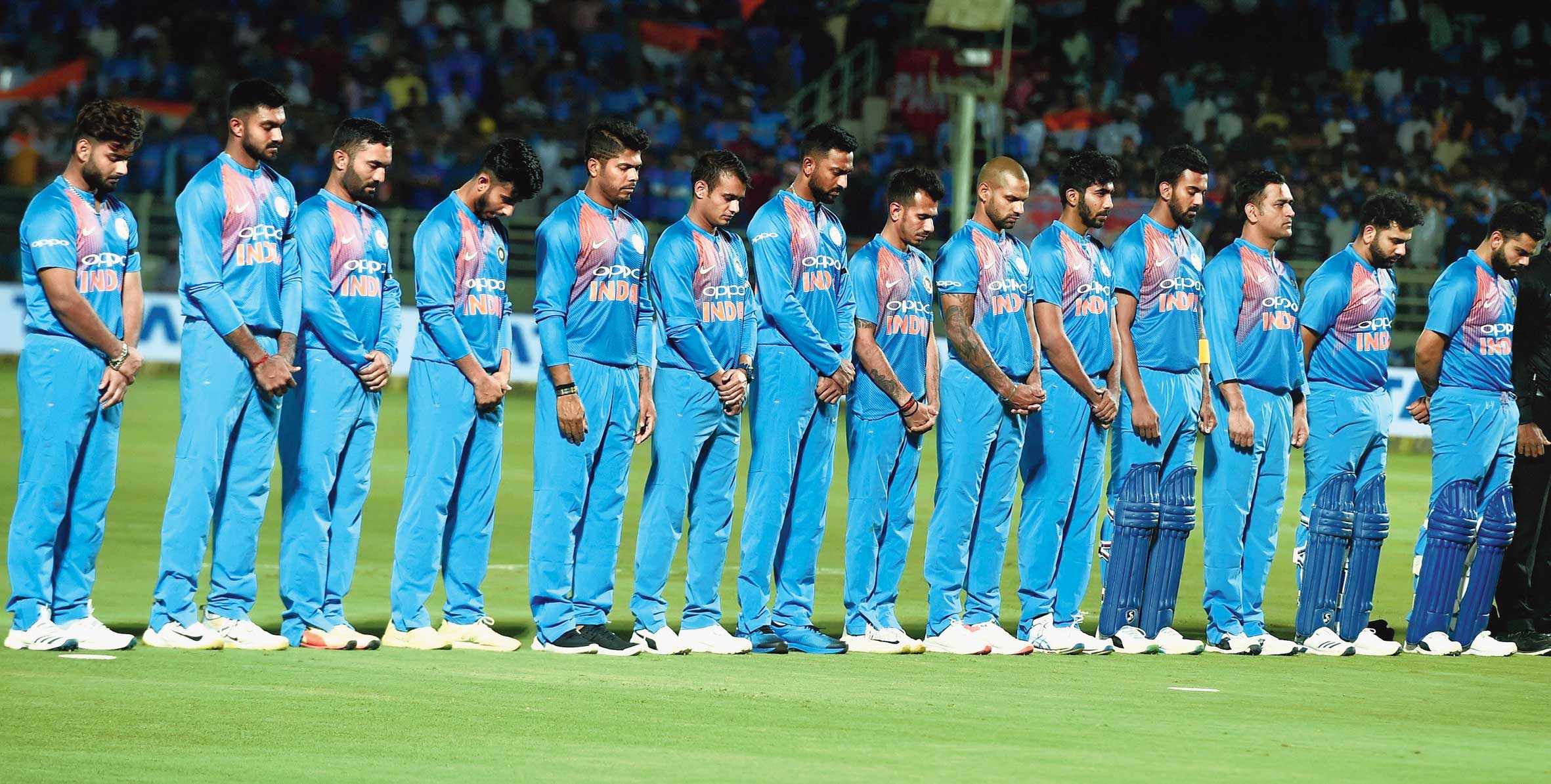 India players observe a minute’s silence in memory of the CRPF jawans killed in the Pulwama terror attack, before the start of the first T20I in Visakhapatnam on Sunday.
(PTI)
Our Bureau   |   Calcutta   |   Published 24.02.19, 09:04 PM

Virat Kohli admitted India’s batting in the first T20I against Australia, in Visakhapatnam on Sunday, was “not up to scratch.”

Put in to bat, India, despite comeback man KL Rahul’s 50 and his brisk second-wicket partnership with Kohli, lost their way completely in the middle overs to labour to 126 for seven.

Australian pacers, led by Nathan Coulter-Nile (3/26), did a fairly good job as well. The visitors were in cruise control during their reply especially when D’Arcy Short (37) and Glenn Maxwell (56) were at the crease.

But the duo’s dismissals, followed by Jasprit Bumrah’s immaculate bowling in the penultimate over, put Australia under pressure as they required 14 off the final over. But Jhye Richardson and Pat Cummins showed good composure to get those required runs with three wickets in hand.

Speaking at the post-match presentation, the India captain said: “We were not up to scratch while batting. The wicket was decent enough to bat on till the 15th over. But we didn’t really bat well.

“Besides, a low scoring game is on the cards in T20 cricket every now and then because you are always going for runs.”

Kohli feels a total of 150 would have been a winning total on the ACA-VDCA Stadium pitch. “Rahul and me had a good partnership.

“It could have been longer and bigger, and could’ve taken us to 150 or so. I think had we got to 150, it would have been a winning score, considering how the pitch had become.

“But Australia deserved to win as they played better than us,” he added.

Kohli, though, lauded his bowlers for not throwing in the towel when at one stage Australia needed only 29 off the last five overs with seven wickets in hand.

“With the bowling effort, we were pleased. We never thought we were going to be in that position in the 19th over, but Bumrah can do wonders with the ball especially when it’s reversing and did exceptionally well to get us in the game.

“And (debutant) Mayank (Markande) too did well in the middle overs.”

Praising Rahul, who was impressive in his first India game on returning after being suspended for controversial comments on a TV show, Kohli agreed that the former’s half-century only added to India’s selection headache. Giving more game time to Rahul and Rishabh Pant would help India figure out the combination they need to go in with into the World Cup.

“Anything is possible right now. We want to give game time to Rahul and Rishabh to figure out what we need to do in the World Cup,” Kohli said.

“He (Rahul) is a quality player, given the way he plays in the Powerplay, and he backs himself to play good cricketing shots. It’s very difficult for the bowlers to get him out especially when he is playing like that. He played a really good knock.”

Reflecting on the victory that helped Australia go 1-0 up in the two-match series, Kohli’s counterpart Aaron Finch said: “Yes, absolutely… India are a team that cannot be taken lightly at all.

“I think the wicket got lower and a bit slower. And when Bumrah has an over up his sleeve, it’s going to be hard work as well. The run-outs did not help us either, but great to get the win.”

Finch came up with whole-hearted praise for his bowlers.