Advertisement
Home / Sports / Cricket / Was ready versus England too: Shaw

Was ready versus England too: Shaw

The 18-year-old had to wait until the home series against West Indies to step into Test cricket and he made it count, scoring 134 runs off only 154 balls on the opening day 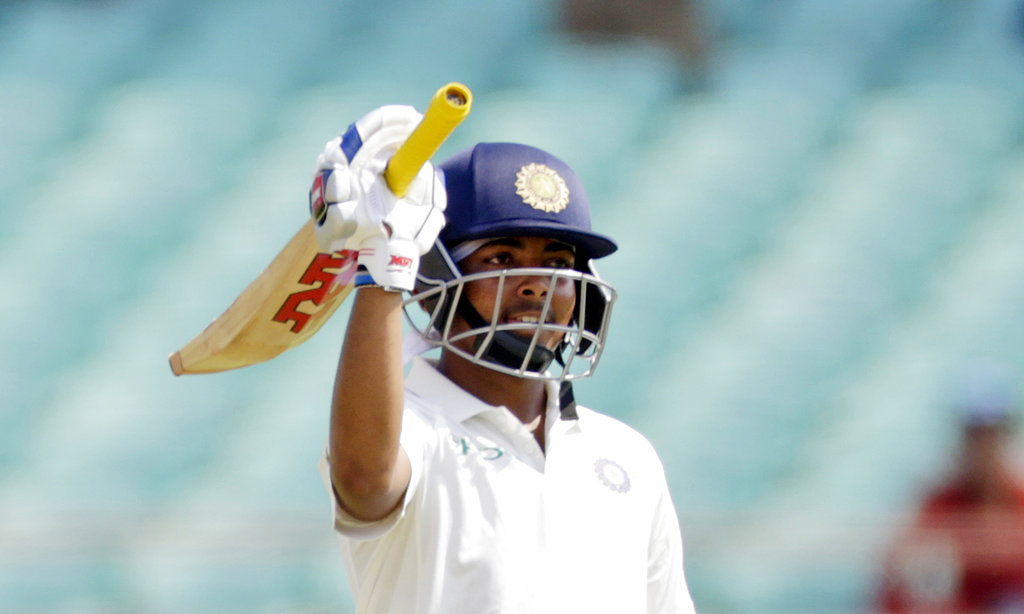 Prithvi Shaw has been a part of India’s roster since the fourth Test in England, and although he felt he was “ready to play” even then, the opportunity didn’t come his way.

The 18-year-old had to wait until the home series against West Indies to step into Test cricket and he made it count, scoring 134 runs off only 154 balls on the opening day.

He dedicated his feat to his father after the day’s play in Rajkot.

On his penchant for centuries on debut

I don’t know how I manage to score century in my debut games. I try to play each ball on its merit. So I came here with the same mindset. Just because it was my first Test, I didn’t want to do anything different. I wanted to bat like the way I was batting in the domestic competitions and India A tours. I was remembering those innings.

On how challenging it was to implement plans

Obviously I was nervous, this was my Test debut. But after 10 overs, I was hitting the ball well and I was getting the boundaries. I got confidence and I didn’t feel the pressure. I wanted to dominate them as much as I could. I like dominating the bowlers and I was trying that. I was waiting for the loose balls and they bowled many boundary balls. So I was trying to balance it out between playing the ball on its merit and attacking the loose balls.

When Viratbhai came to bat… Obviously when a new batsman comes to bat he checks about what’s happening with the pitch, whether the ball is moving or not. So he asked such questions. In between he even praised me as well.

On whether he would have preferred making his debut in England

It’s up to the coach and Viratbhai to decide on when to play me. But I was ready for the England series as well. So I would have tried my best to perform well. Here I got an opportunity and I am happy about it. There is a difference in playing the U-19 matches and India matches. In international games, you don’t know your opponents much. They would have come with lot of strategies. The bowlers are very experienced in international cricket and there are a variety of bowlers which makes it even more challenging.

On his experience with the Indian team during the England tour

I had a great experience over there sharing the dressing room with all the senior players, with all the stars… They made me very comfortable, it was not like a senior-junior [thing]. Ravi Sir and Viratbhai always told that there’s no senior or junior in the team.. If you are playing for India, you are among us. That made me feel really confident and a bit out of pressure. It was nice sharing the dressing room with so many seniors who have already played 5-10 years of international cricket… They got the experience and they used to share it with me… Because of all these things, everyone is like my friend in the team… We enjoy time off the field, on the field we are together and it feels great.

On the eventful year

I feel this has been a great year, we won the [Under-19] World Cup, the IPL debut happened, Test debut has happened, too now. I have been consistent. I was going match by match, it wasn’t a case of me thinking about international cricket after winning the World Cup. Whatever games came my way, I tried to give my best... Do whatever I can to win matches for the team, be it at the Ranji Trophy level, India A or IPL… This was always on my mind. I want to dedicate this hundred to my dad, he has made a lot of sacrifices for me, he’s still doing it... he’s been very helpful throughout my journey, whenever I have been nervous or have gotten out early… I can’t list it out all but he’s done a lot.

On the chat with his dad before this game

My dad doesn’t know that much about cricket but he has watched so many years of cricket. He was like just go out there, play how you play in a first-class match or India A game... Just go and enjoy your debut, no pressure at all.