Prithvi has not only joined the elite club of centurions on Test debut, he was also adjudged the Man of the Match after India blew away the West Indies in the first Test for an innings and 272-run win 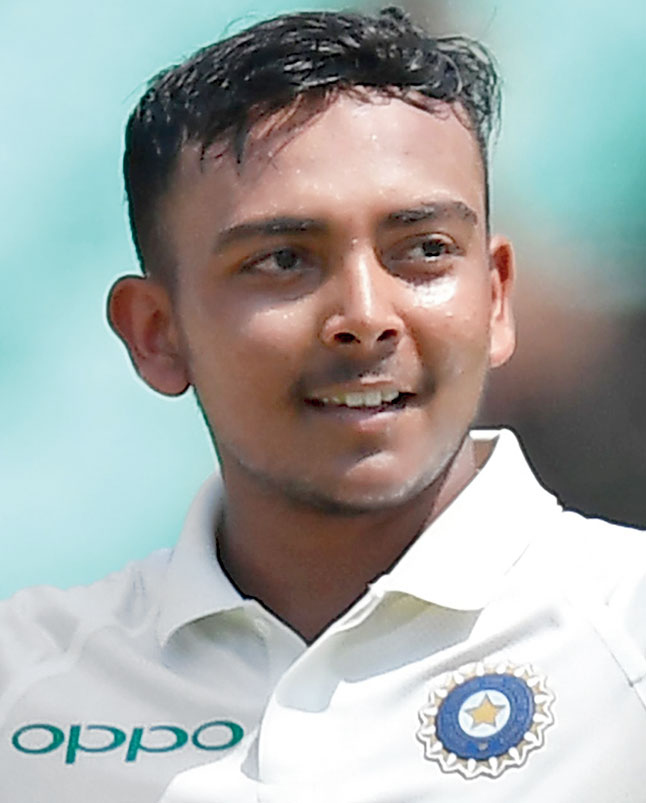 Prithvi Shaw has earned quite a lot of praise for his impressive performance on Test debut for India. On Saturday, India captain Virat Kohli too had good things to say about the Mumbai youngster.

Prithvi has not only joined the elite club of centurions on Test debut, he was also adjudged the Man of the Match after India blew away the West Indies in the first Test for an innings and 272-run win in Rajkot.

Speaking at the post-match presentation ceremony, Kohli said that Prithvi is a player of “different quality, besides also praising Ravindra Jadeja, who scored an unbeaten century and took four wickets over two innings in the match.

“Delighted for Prithvi and Jaddu. Playing his first game, seeing him dominate… The guy (Prithvi) showed he is of different quality. That’s why he’s been pushed to the Test team. It is exciting to see (such a player) from the captain’s perspective.

“Jaddu as well — he has got important runs for us before and we wanted him to get three figures here too. We believe he can turn matches for us,” Kohli said.

India’s win in Rajkot comes after 1-4 Test series loss in England. But Kohli wasn’t interested to draw any comparison between the two series, but did say that it was a “bigger challenge” against Joe Root’s team. “I don’t think you can compare the two conditions [England and India]. That was a bigger challenge,” he said.

Terming that India’s performance against the Windies in the first Test, Kohli didn’t want to go too deep into the quality or problems of the Caribbean team.

“We understand that with the ability we have, we will dominate in these conditions. We were very clinical. It’s not something for me to speak on (the West Indies’ performance), I’m sure they’ll sort out the errors. We don’t want to focus on what the opposition does. I’m happy that we were clinical,” the India captain said.

Kohli also credited the pace duo of Mohammed Shami and Umesh Yadav for putting the opposition under pressure.

“If you see the first innings, the way Umesh and Shami ran into bowl… Few wickets with the new ball and you can put the opposition under pressure. Shami took wickets on a pitch that was offering nothing.”

About India maintaining an impressive over rate, Kohli said: “It was a bit to do with the umpires pushing us as well. With the new rule of not drinking water, the guys struggled a bit, it was difficult for guys to bat 45 minutes without water. I’m sure they’ll look at those rules and adjust it for different conditions.”

Prithvi, on the other hand, said that he couldn’t have asked for a better start to his international career.