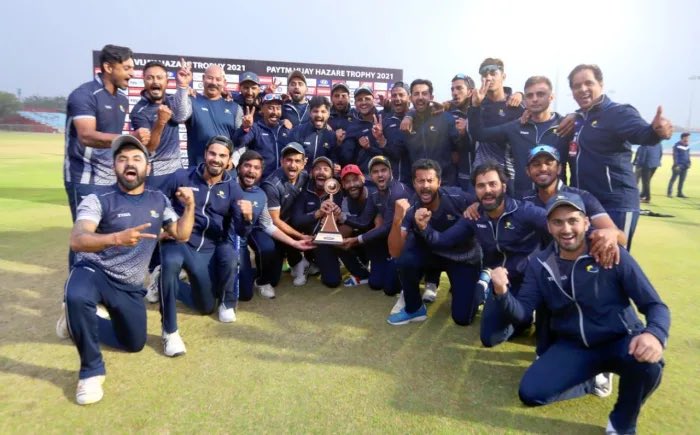 Himachal Pradesh stunned a mighty Tamil Nadu by 11 runs (via VJD Method) to emerge champions of the Vijay Hazare Trophy at the Sawai Mansingh Stadium in Jaipur on Sunday.

Youngster Shubham Arora came out all guns blazing with his maiden List A century as Himachal prevailed over five-time champions Tamil Nadu to win their first ever domestic one-day title.

Chasing a stiff target of 315, Himachal, who were playing their maiden Vijay Hazare Trophy final, responded in style with the 24-year-old wicketkeeper-batsman making a fine 136 not out with 13 fours and a six. With Himachal placed strongly at 299/4 in 47.3 overs and needing 16 more to win off 15 balls, bad light suspended play at 5pm. Himachal were then declared winners under the VJD Method.

Tamil Nadu were reduced to 40/4 in the 15th over after Himachal won the toss and opted to bowl. But senior pro Dinesh Karthik’s superb century (116) and a fluent 80 from Baba Indrajith helpd them recover and post a formidable total of 314 in 49.4 overs.

It looked an ominous task thereafter for Himachal, but alongside 24-year-old Arora, Amit Kumar (74) and captain Rishi Dhawan (42 not out) too came up with crucial contributions that helped Himachal maintain a very healthy scoring rate. Skipper Rishi finished as Himachal’s top run-getter (458), averaging 76.33, while his tally of 17 wickets also make him one of the most consistent performers of the competition.

With such figures, it will only be surprising if his name doesn’t get raised when the selectors get down to finalise the India squad for the South Africa ODIs next month.