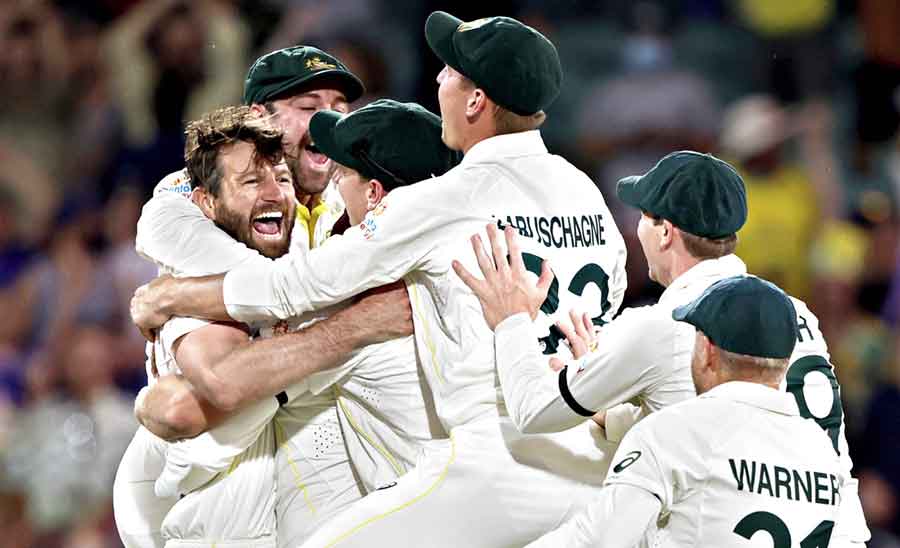 Australia declared their first innings on 473/9 and then reduced England to 17/2 after a near-flawless evening session to take charge of the day-night second Ashes Test on Friday.

England lost both their openers cheaply before bad weather brought the second day’s play to an early close at the Adelaide Oval. England captain Joe Root was batting on 5 and Dawid Malan on 1 with the visitors facing an uphill task to stay alive in the pink-ball contest.

Earlier, England brought out the big guns, Jimmy Anderson and Stuart Broad, to open the bowling on a hot and overcast day. Australia began cautiously with Marnus Labuschagne finally clinching his sixth Test century after 54 balls in the nervous nineties.

Two balls later, it looked all over as the 27-year-old was caught behind but TV footage showed bowler Ollie Robinson’s foot was fractionally over the crease and the batsman was recalled.

One run later, however, Robinson had his revenge, trapping Labuschagne lbw for 103 off 305 balls.

It was an enthralling post-tea spell, more T20 than Test cricket, for the crowd who had sat through a largely slow and predictable two days. Neser, on his Test debut, blasted 35 off 24 balls while Starc remained not out after a run-a-ball 39.

The onslaught meant that England openers Rory Burns and Haseeb Hameed took to the field with a previously-dulled crowd now whipped into a frenzy. Australia fielded aggressively against both batsmen with four slips and just one player on the boundary.

Burns (4) fell first, to Starc, with Smith taking the catch at second slip. Neser made it a session to remember by clinching his maiden Test wicket, as Hameed (6) was caught by Starc at mid-on.

“We are all so happy for him, with what he has done for the last four years in Shield cricket,” Labuschagne said.

“It’s so exciting to see him take that first one and it can give him the confidence to come back on Saturday and lock into his bowling.”