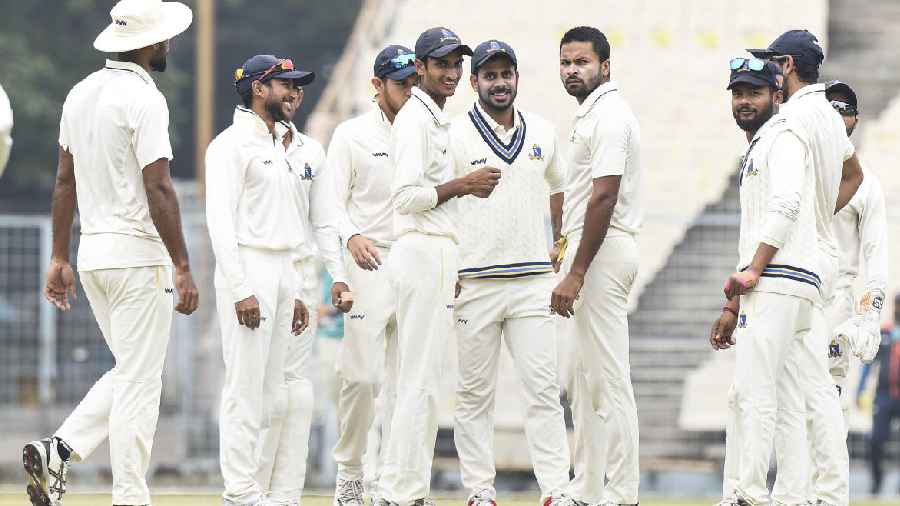 For Madhya Pradesh, left-arm spinner Kumar Kartikeya (5/67), having rocked Bengal in their first innings as well, was the standout bowler.
File picture
Our Bureau   |   Published 19.06.22, 12:54 AM

Captain Abhimanyu Easwaran (78) failed to get any support from the other end as Bengal’s Ranji Trophy campaign ended with a 174-run defeat to Madhya Pradesh in the semi-final on Saturday.

Resuming the final day on 96 for 4 at the Alur Cricket Stadium (near Bangalore), Bengal were bundled out for 175 as Madhya Pradesh reached their first Ranji final since 1998-99.

For Madhya Pradesh, left-arm spinner Kumar Kartikeya (5/67), having rocked Bengal in their first innings as well, was the standout bowler. Hardly any of the Bengal batsmen could pick him on the Day V pitch. What also made things easier for Madhya Pradesh was Bengal batters failure to tackle medium pacer Gaurav Yadav (3/19) on a spinner-friendly track.

Anustup Majumdar, also one of the senior-most batsmen in the Bengal line-up, fell off Yadav’s bowling without adding to his overnight score of eight. Barring Shahbaz Ahmed (22 not out), none of the other established batsmen could contribute, which doubled the pressure on Easwaran who had to wage a lone battle till getting cleaned up by Kartikeya.

Easwaran’s dismissal was the final nail in Bengal’s coffin as Madhya Pradesh picked up the remaining four wickets thereafter to set up a final date with Mumbai.

Head coach Arun Lal agreed that the first hour of the first innings, when Bengal had lost half their side for just 50-odd, was one of the reasons behind their defeat. “There was no justification for such a collapse. Also, we bowled poorly on Day I,” Lal told The Telegraph late in the evening.

“Besides, we are a very good team particularly when playing on pacer-friendly conditions. In conditions that favour spin, we tend to struggle as our spinners have to improve a little bit,” Lal pointed out.

“At the end of the game, we sat and had some discussions with each other. We had a brainstorming session on the areas where we erred and need to improve on.

“The problem is, over the next three months or so owing to monsoons, you won’t be able to resume on-field training and have to wait till September/October when the season begins with white-ball tournaments,” he added.

There have been talks over whether this would be Lal’s last season as Bengal coach. Asked about his future, he said: “It depends on what call the CAB (Cricket Association of Bengal) takes.”