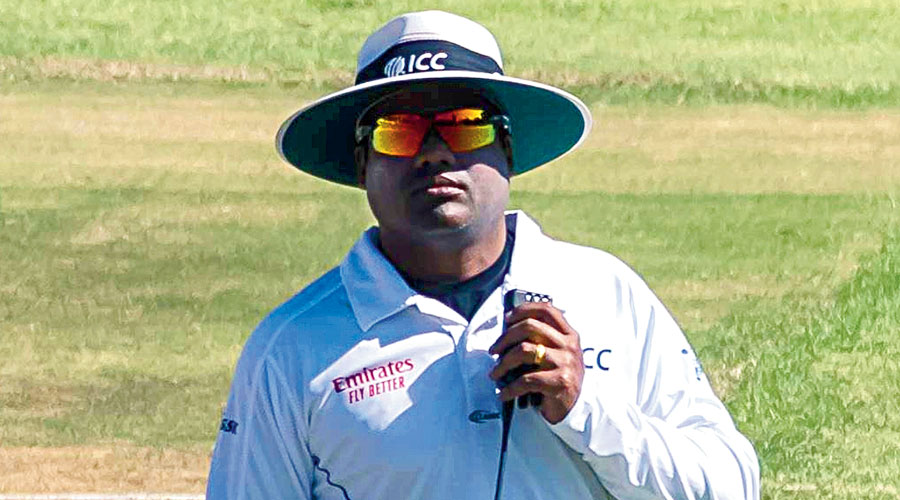 India’s Nitin Menon on Monday became the youngest member to be included in the International Cricket Council (ICC)’s elite panel of umpires, replacing England’s Nigel Llong for the 2020-21 season after an annual review.
The 36-year-old, who has officiated in three Tests, 24 ODIs and 16 T20Is, is only the third from India to make it to the prestigious panel after former captain Srinivas Venkataraghavan and Sundaram Ravi. Menon has also stood in ten women’s T20Is, including the 2018 and 2020 T20 World Cups.
“To be officiating regularly along with the leading umpires and referees of the world is something that I always dreamt of and the feeling has yet to sink in,” Menon said in an ICC statement.
England’s Michael Gough, 40, was the youngest in the current panel before Menon’s elevation.
Menon quit playing competitive cricket at 22 and by 23, he had become a senior umpire, officiating in BCCI accredited matches.
The ICC has a system in place to monitor the umpires’ performances, including on-field decision-making, the number of reviews the match official has got right, and conduct on the field. Accordingly, points are tallied and umpires are ranked internally.
A selection panel comprising ICC general manager (cricket) Geoff Allardice (chairman), former player and commentator Sanjay Manjrekar, and match referees Ranjan Madugalle and David Boon picked Menon, who was earlier part of the ICC international panel of umpires.
Menon will be eligible to officiate in next year’s Ashes in Australia in case the ICC revokes the local umpires for home series policy, which is in place because of the pandemic. Otherwise, he can stand for all five Tests that India will play against England at home early next year.
Menon is well aware of his responsibilities. “We did not have any representation in the elite panel for a while. I now want to keep the Indian flag flying high. I hope to see more umpires from India at the top level,” Menon told bcci.tv. “I see this as an opportunity and a big responsibility.”
He also thanked ICC’s umpire coach Denis Burns. “I am very grateful to Mr Denis Burns for all his guidance and support in my career as an international umpire.”