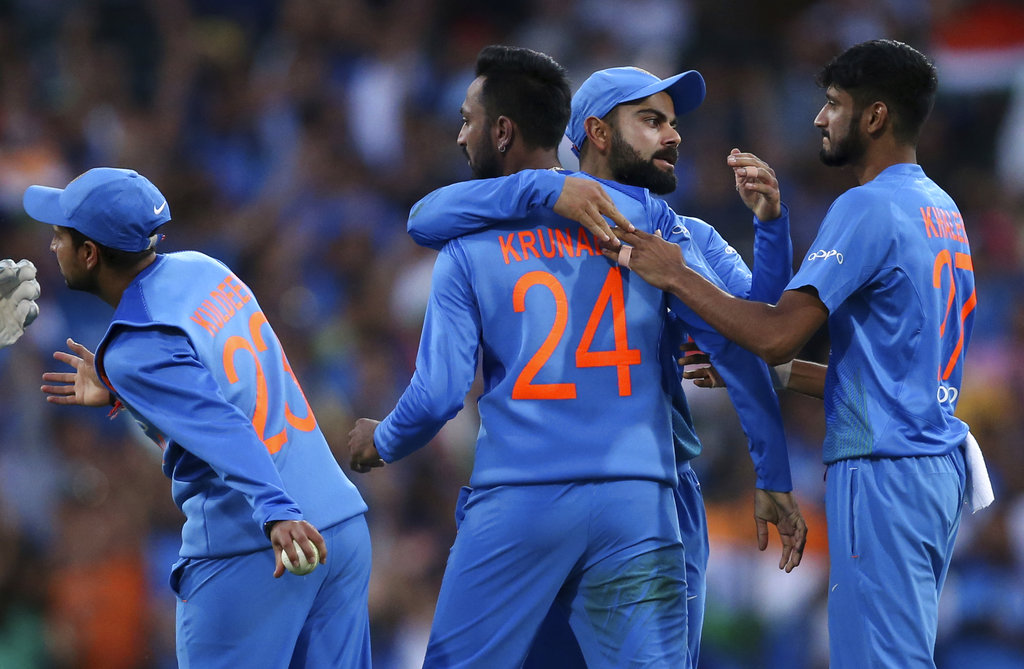 Krunal Pandya is congratulated by Virat Kohli after taking the wicket of Australia's Ben McDermott during their Twenty20 cricket match in Sydney on Sunday.
AP
Our Bureau   |   Calcutta   |   Published 25.11.18, 11:01 PM

India captain Virat Kohli was all praise for Krunal Pandya, whose bowling played a major role in India forcing Australia to share the three-match T20I series that ended 1-1 on Sunday.

The left-arm spinner took four wickets to restrict Australia to 164/6 after the hosts won the toss and opted to bat first.

Thereafter, India rode a blistering start from openers Rohit Sharma and Shikhar Dhawan, and Kohli took it up from there with his unbeaten 61 and unbroken 60-run stand with Dinesh Karthik to win the final game by six wickets at the SCG.

“Yeah, Krunal was amazing and he executed his plans really well. He was brilliant…

“With the ball, we were more professional in this game, given the kind of wicket on offer. I thought it was a 180 wicket. The way we bowled, conceding 15 runs less was a bonus for us that turned out to be crucial in the end,” Kohli said during the post-match presentation.

Krunal admitted he was down and out after a poor showing in the first T20I. “It is very difficult when you play your first game in Australia and you get hammered for 50-odd from four overs.

“To come out of that was not easy. It took me a while to back myself much more, especially when I have hardly played any game at this level.

“Giving away 50-plus runs in Brisbane was very tough for me and the next 24 hours were really, really tough. I had to convince myself again. Whatever anyone says, it takes some time to set in.

“When I played the second game (in Melbourne), I was very clear with my plans and what I had to do,” Krunal said during the post-match media conference.

“When you come back like this, it is very satisfying. You had such a bad day and then against the same opponent when you do well, it gives satisfaction, happiness and a surety that you belong to this level.

“When you haven’t played at this level and then you perform like this, it gives you hope that you belong here.”

Totals of 160 or above do get tricky to chase down in this format, but Rohit and Dhawan put on 67 in less than six overs to bring the equation easier for India.

“Things become pretty easy when Shikhar and Rohit do the job for us... Couldn’t have asked for a better start chasing a tricky total...

“Our openers are a joy to watch. When they get into the zone, they’re difficult to stop. Both complement each other really well and that’s been the strength of this team,” Kohli said.

Australia captain Aaron Finch too agreed that the blazing start provided by Rohit and Dhawan made matters tougher for Australia.

“They are totally different styles of batsmen which is tough for bowlers. That’s why they’ve been a great opening combination. We guys had a plan, but just didn’t execute in the middle overs with the bat,” Finch said.

Elaborating on India’s chase, the skipper added: “We thought the wicket would slow down with the old ball, so it was important to get stuck in there. There were a few nervous moments here and there, but that’s how T20 cricket goes. If you lose momentum, you will have to work hard to gain it back.

“DK did really well in the end. He showed great composure at the death and helped in the partnership to see us home. Overall, skills wise, we were better on the day than Australia.

“A level series is a fair reflection of how the two teams have played.”

Australia wicketkeeper Alex Carey said: “Kohli obviously played really well. He was put under a little bit of pressure towards the end, but they started well in the Powerplay and it was hard to peg them back.

“We’ve seen Kohli do that before and he did it again in this game. Hopefully in Tests, we’ll stop him and he won’t score big.”