It has gone really well. A 3-0 win against the best team in the world, it’s absolutely phenomenal: Ben Stokes 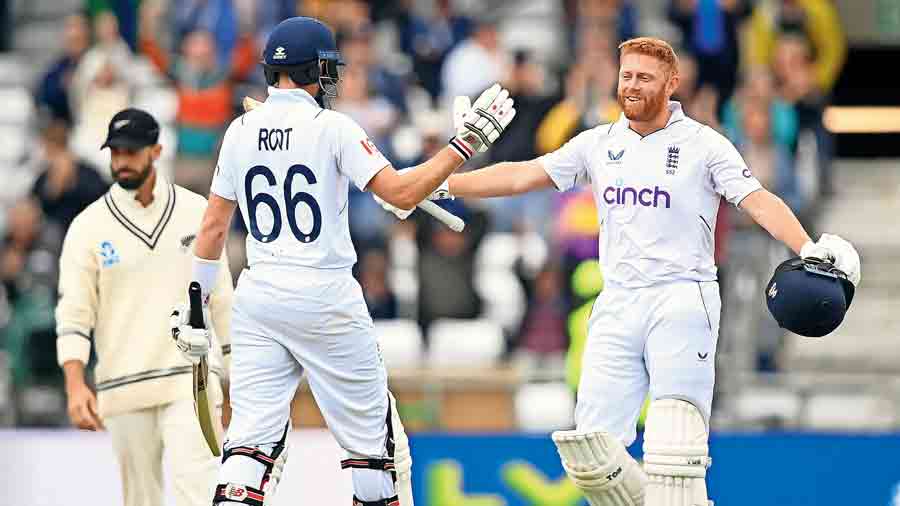 Bairstow and Joe Root celebrate their series victory over New Zealand after winning the third Test at Headingley in Leeds on Monday.
Getty Images
Our Bureau And Agencies   |   Calcutta, Leeds   |   Published 28.06.22, 01:48 AM

A series sweep in his first full-time captaincy assignment achieved, Ben Stokes spoke of a “change of mindset”, something that has been very evident in the way England have gone about their business in the series against world Test champions New Zealand.

Stokes’s men completed the formalities on Monday, with Jonny Bairstow hitting the second fastest fifty for England in Test cricket. The home team needed 113 runs more on the final day to ensure a 3-0 series sweep and they did it easily, winning the third Test by seven wickets at Headingley.

Bairstow, whose batting heroics was key to ensuring England won the second Test, picked up from where he left off at Trent Bridge as he brought up his half century in 30 balls and then took England to victory on the last day with an unbeaten 71, finishing it off with a six.

A 111-run partnership with Joe Root (86 not out) saw England reach the competitive victory target of 296 as they completed their first clean sweep of a home series in over a decade.

“It has gone really well. A 3-0 win against the best team in the world, it’s absolutely phenomenal. It’s about the change of the mindset of the lads towards Test cricket. To say that we have done it so quickly is unbelievable. Huge credit to (coach) Brendon (McCullum) and the backroom staff,” Stokes said at the presentation.

Rain delayed the start of play by 90 minutes but it then took just over an hour, and 15.2 overs, for England to canter to victory.

Resuming at 183/2 overnight, Ollie Pope was dismissed off the fifth ball of the day. Pope went for 82 as Tim Southee knocked over his off stump to offer Kane Williamson’s New Zealand hope of a potential upset comeback but that was quickly dispelled by Bairstow’s bashing of their bowlers.

Playing on his home ground, Bairstow hit eight fours and three sixes as he took to the bowling and left Root, who had been 55 overnight, little chance to get to a century.

It was the third successive Test in which England reached a substantive target with an aggressive batting display. They won the first Test at Lord’s as they chased down 277 runs while in the second Test at Nottingham reached 299/5 in their second innings with Bairstow scoring 136.

The last time England swept a home series was a 4-0 success over India in 2011. Stokes’s squad next face India, in the rescheduled fifth and final Test, and the captain promised an equally aggressive mindset against the visitors. “India are a different opposition but we will come out with the same mindset,” Stokes said, sounding the bugle.