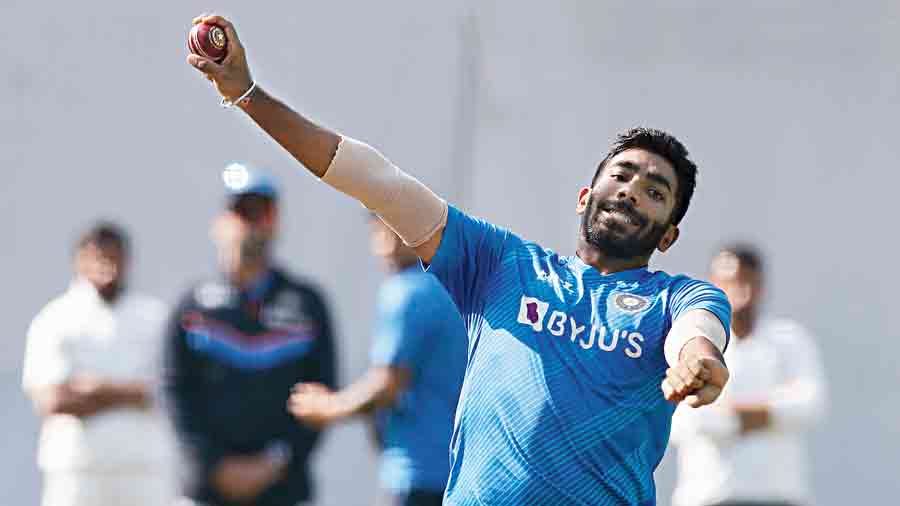 India vice-captain Jasprit Bumrah during practice for the Test series against Sri Lanka in Mohali on Tuesday.
Twitter
A Staff Reporter   |   Published 02.03.22, 12:01 AM

Jasprit Bumrah is anything but overawed with the vice-captain’s responsibility.  Being KL Rahul’s deputy in the South Africa ODIs and playing the same role in the recently concluded T20I series versus Sri Lanka, the pacer has to again assist captain Rohit Sharma for the two Tests against the Islanders with the first beginning in Mohali from Friday.

Bumrah, though, doesn’t wish to complicate matters. All that he’s focusing on is to help his teammates as a senior member of the team.

“See, whether it’s a spinner, a pacer or a batter who’s the leader, I don’t look at it that way. As a senior member of the team, you have to help the players in whatever capacity you can,” Bumrah said after India’s optional training session on Tuesday.

“As I have said before, this (being vice-captain) is just a post. Yes obviously, it’s a great opportunity that has been presented to me and I’m very happy to take it up.”

Bumrah’s endeavour will be to help captain Rohit in whatever way he can. “I’ll try to give my best in whatever capacity I can. It depends on how you handle the situation and how strong you are tactically,” he stated.

Of his 27 Test appearances, Bumrah has played only two at home with four wickets so far: versus England last year in Chennai and Ahmedabad. The 28-year-old, however, doesn’t wish to read much into the matter.

“It doesn’t make a lot of difference to me,” he said. “Whenever I’ve got an opportunity, I’ve tried to do well. I have played a lot of Ranji Trophy cricket, so these conditions are not alien to me. I’ve played a lot of cricket in India and that’s why I’ve made the Test squad.

“It’s always a special feeling to play Test cricket, be it anywhere: abroad or home. I look to adapt, try to analyse the wicket and use it to my advantage. That would be no different come game day and I’ll look to enjoy the moment,” Bumrah added.

Ravichandran Ashwin taking bulk of the wickets with his off-spin and variations is one reason why Bumrah hasn’t had to do much bowling in home Tests. Ashwin is “shaping up well” and will play a crucial role in the coming two-Test series as well, Bumrah asserted.

“He looked good. He looked very comfortable in training today (Tuesday). He was bowling, batting, fielding... He did everything, so I think he’s shaping up really well.

“He plays a very important role whenever we play and hopefully, there will be no troubles for him (in terms of his fitness) going forward,” Bumrah said.

Speaking of what could be India’s combination for the first Test, Bumrah said a call on that would be taken later. “We’ve had a look at the track, but there’s still some time left for the Test. So there could be a lot of changes.

“At the moment, we’ve not had a combination in mind. But everybody was looking good and in touch in the optional session. That’s a positive sign for us. Hopefully, we’ll finalise our plans soon.”