India vs Sri Lanka: India call the shots with both bat & ball

The pink-ball day-night game could be over by the third day, though, given the lopsidedness of the contest, a two-day finish is also very much on the cards 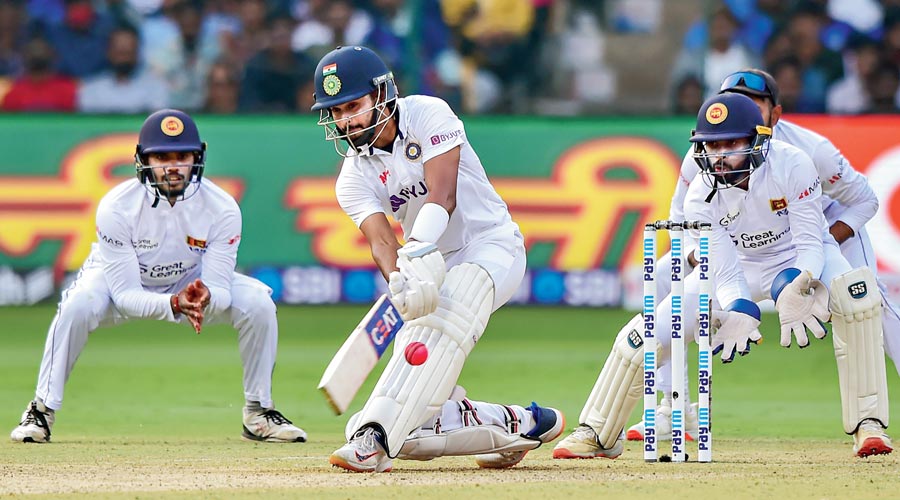 The second Test between India and Sri Lanka is hurtling towards a premature finish after 16 wickets fell on the opening day. The pink-ball day-night game could be over by the third day, though, given the lopsidedness of the contest, a two-day finish is also very much on the cards.

India, winning the toss, rode Shreyas Iyer’s 92 to make 252 in their first innings. The Sri Lankans then huffed and puffed to 86/6 when the stumps were drawn at the Chinnaswamy Stadium in Bangalore on Saturday.

At the close of play, Niroshan Dickwella was batting on 13 with a nervous-looking Lasith Embuldeniya yet to trouble the scorers.

There were enough reasons for someone like Embuldeniya, a left-arm spinner with a Test batting average of 9, to be shaky. The pitch in use has a mind of its own and the pink ball only makes it even trickier to bat on it. Add to that the mastery of the world-class Indian bowling attack. Surviving on such a surface needs superior Test-batting skills, which the current Sri Lanka team lacks. So it wasn’t very surprising that Lanka were reduced to 28/4 within the first 12 overs of the innings.

What was a bit surprising though was the fact that while it were the spinners who looked to benefit more from the pitch before sunset, under floodlights it were the pacers who were dictating the terms. Jasprit Bumrah and Mohammed Shami, two of the best fast-bowlers in the business currently, produced mischievous movements with the pink ball and shared five wickets between them.

Sri Lanka’s scorecard would have looked poorer had it not been for Angelo Mathews’ counter-attacking innings. The 34-year-old, an experienced all-rounder who doesn’t bowl anymore, scored 43 crucial runs, but then threw away his wicket in the penultimate over of the day to undo it all.

The Lankans still trail India by 166 runs and expecting their tailenders to stand up to the challenge of India’s spin troika of Ravichandran Ashwin, Ravindra Jadeja and Axar Patel under the afternoon sun on Sunday is expecting too much. The visitors look doomed.

Earlier in the day, Shreyas authored a masterclass when most of the other Indian batsmen struggled to negotiate the unpredictable turn and bounce of wicket. His 98-ball innings with 10 boundaries and two sixes rescued India after they were 126/5 at one stage.

Rishabh Pant’s 26-ball 39 also helped release some of the pressure in the Indian innings.

Though the Sri Lankan spinners — Embuldeniya, Praveen Jayawickrama and Dhananjaya de Silva — shared eight wickets between them, they were wayward in their execution as India enjoyed an innings run rate of 4.25. The visitors were also guilty of dropping quite a few catches.