Hosts reeling at 84 for 5 at Stumps on Day II 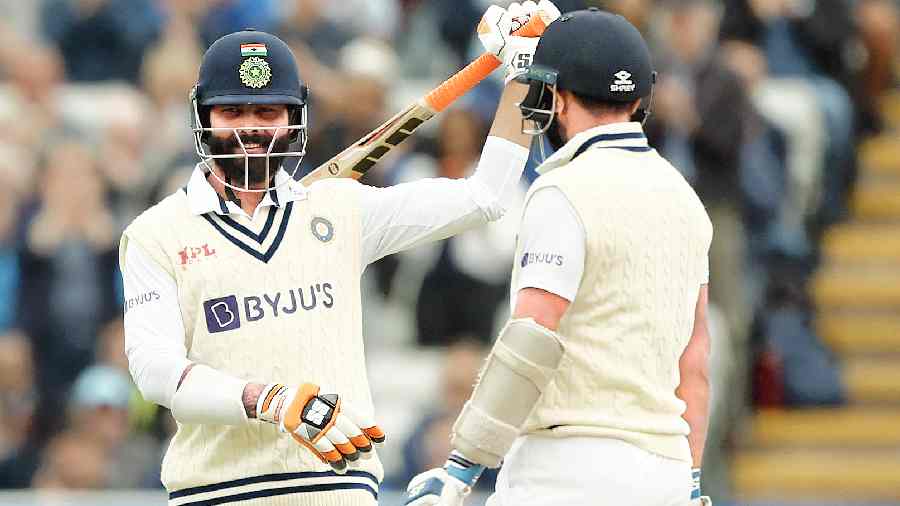 Ravindra Jadeja (left) celebrates after completing his century against England on Day II of the fifth Test at Edgbaston on Saturday.
Twitter
Sayak Banerjee   |   Calcutta   |   Published 03.07.22, 12:43 AM

The vulnerability of England’s top order was always going to be an advantage for India in this rescheduled fifth Test in Birmingham.

Just as expected, the hosts’ top-three batters, including the “improved” Ollie Pope, continued with their spineless showing that has placed India in a strong position. At stumps on a stop-and-start rain-hit Day II at Edgbaston, England were struggling at 84 for 5. India earlier stretched their first innings total to a formidable 416.

Stand-in captain Jasprit Bumrah, following his useful contribution with the bat (31 not out) that included an assault over Stuart Broad, removed openers Alex Lees and Zak Crawley before sending No. 3 batsman Pope back.  It was again left to England’s batting mainstay Joe Root and the in-form Jonny Bairstow (12 batting) to bail them out.

When play resumed in the final session, Mohammed Siraj used the wobbly seam to land a massive blow on England’s prospects, getting rid of Root. Soon after, Mohammed Shami, who had been making brilliant use of the seam,removed night-watchman Jack Leach that forced England skipper Ben Stokes out to the middle.

In all fairness, the Indian quicks bowled the correct lengths to extract maximum out of this Edgbaston surface, something their English counterparts, barring James Anderson (5/60), couldn’t.

Off Bumrah’s three wickets, he took two in each of the extra deliveries he had to bowl after having overstepped in the last ball of the respective overs. Left-handed Lees, the first to depart, had his feet static to a ball shaping in and was rightly cleaned up.

Soon after play resumed in Saturday’s second session, Crawley, fortunate enough to be retained in the XI, poked at a delivery he could have easily left alone. Following another rain interruption, Bumrah sent another one down outside the off-stump channel with Pope playing an equally pathetic stroke, much to the delight of the Indians.

Ravindra Jadeja (104), earlier in the day, reached his third Test century. England, though, still had a good opportunity to restrict India to within 380 till Broad messed it up with those needless short-pitched stuff that Bumrah cashed in on.