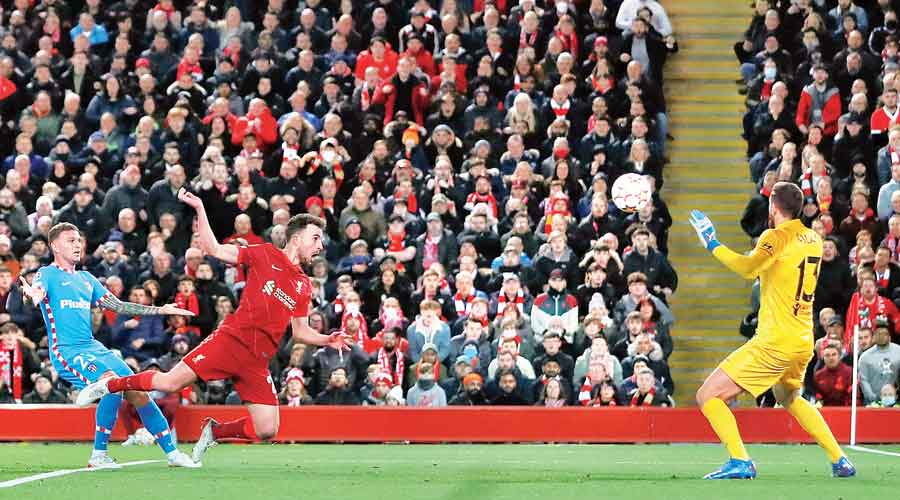 Liverpool marched into the knockout stages of the Champions League with two games to spare after a convincing 2-0 victory over 10-man Atletico Madrid at Anfield on Wednesday guaranteed them top spot in Group B.

With four wins out of four, Juergen Klopp’s side can now take their foot off the gas for the final two games of the group stage and focus their resources on their Premier League title push.

Liverpool are yet to lose in 16 matches in all competitions this season and their unbeaten run stretches back 25 matches to their April 6 loss to Real Madrid in last season’s Champions League campaign.

“The first target was to get through this group. I didn’t expect we would be through after four games but the boys did it and it’s really well deserved,” said Liverpool boss Juergen Klopp.

The only negative for Klopp’s side was a hamstring injury to Brazilian forward Roberto Firmino in the second half. A draw would have been enough for Liverpool to be sure of their passage to the last 16, but from the outset Klopp’s side looked like they had nothing but victory on their minds.

Diogo Jota put the home side ahead in the 13th minute, nodding home at the back post after a great cross from the right by Trent Alexander-Arnold although Atletico coach Diego Simeone will surely have felt that his stationary defenders made the goal far too easy. Alexander-Arnold was again the provider for the second eight minutes later when his low ball into the box was brilliantly met by Sadio Mane who fired past Jan Oblak.

Oblak was puzzled by the team’s defending in front of him but said qualification for the knockout stage remained within their reach.

“We depend on ourselves. We have to win the two games that remain,” he said. “It won’t be easy — we all know that — and we have to give our best version of ourselves and do our best. With our quality, if we show it on the field, we can win the two games and get through to the last 16.”

Klopp said he “hated” taking Mane off at half-time but with the Senegal striker on a yellow card the Liverpool manager feared the visitors would try to get him sent off.

Atletico were reduced to 10 men when defender Felipe was red carded for tripping Mane, who was booked early on for a clash with Angel Correa. “Probably everybody in the stadium expected I would do it and I thought it was the right thing to do,” Klopp told reporters.

“I hated it more than you can imagine because Sadio played an incredible game, but then what’s the decision? I was not worried that Sadio cannot handle his emotions, he was calm. “The thing is, the ball comes in the air, you go in for a heading challenge and the other player is going down ... we all saw what some Madrid players did, rolling over more and more in all the situations to equal the number of players again.”

Manchester City manager Pep Guardiola lauded the special ability of right back Joao Cancelo after his three assists in the 4-1 defeat of Club Brugge.

Cancelo set up City’s opener for Phil Foden then provided the perfect cross for Riyad Mahrez to restore their lead early in the second half after Brugge had hit back.

The Portuguese then gifted substitute Gabriel Jesus a goal with the last kick of the game. Raheem Sterling scored the third goal.

“He has been playing incredibly well all season,” Guardiola said. “Of course, he sometimes has to improve his quality. He has highs and lows, but he has a special ability to do something good.”

Victory lifted City top of Group A with nine points, one more than Paris Saint-Germain, and they now need one point to seal progress to the knockout stage.

PSG dropped to second in Group A after the 2-2 draw at RB Leipzig and while coach Mauricio Pochettino is still targeting top spot he said the most important thing was to advance. Georginio Wijnaldum scored his first two goals for PSG but RB Leipzig equalised with a stoppage-time penalty.