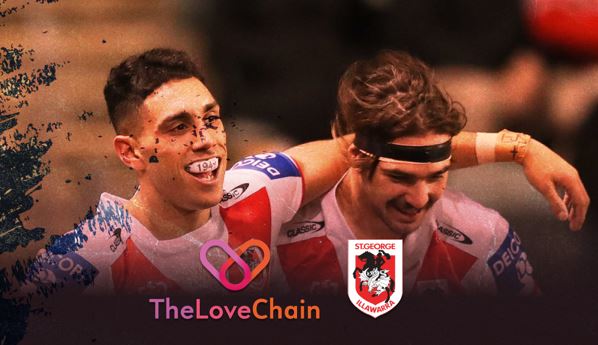 Sydney, Australia, 1 February 2022, St. George Illawarra Dragons, in partnership with The LoveChain will be taking Australian sports partnerships to the next level, with initiatives never seen before, like the launch of the first NFT (non-fungibles token) match day ticket and the NFT collection of legendary players such as Reg Gasnier, Graeme Langlands, Johnny Raper, Norm Provan and Frank Burge and more.

The Dragons will work with The LoveChain to produce NFTs for their fans and rugby league fans in general with a strong focus on celebrating the club’s incredible history and standing in world sport. Anzac Day Cup game between St George Illawarra Dragons and Sydney Roosters will produce the first match day NFT ticket in Australian and New Zealand sport. Latest consumer research in Australia also suggest that 50% of the population is interested in using cryptocurrency and believe it will become a part of their legal tender  in the near future, which makes it very interesting for The Dragons to get involved.

“It is very  encouraging to see that Australians are keen to adopt new technologies, especially blockchain technology and cryptocurrencies, and we are very excited to be a part of the blockchain/crypto revolution with the Dragons” said Adam Mazzaferro, Founder & CEO of The LoveChain.

“With the imminent release of The LoveChain App, we couldn’t be happier with the timing of the partnership with the St. George Illawarra Dragons and with more and more Aussies engaging with cryptocurrency and the Australian Government taking steps into that direction, it will only foster innovation and wider adoption of this technology. We are looking forward to working closely with the Dragons in developing ways to innovate fan engagement and the match day experience including the first NFT match day ticket in Australian professional sport.,” Mazzaferro further added.

St George Illawarra chief executive Ryan Webb said the Dragons' innovative collaboration with The LoveChain, one of Australia's first sporting partnerships of its kind, will help further connect the Dragons to its members, partners and fans.  St. George Illawarra Dragons are working with The LoveChain to create the first official game day match ticket as an NFT in Australian sport, for Anzac Day Cup game between The Dragons and Sydney roosters. This will potentially help tapping the relevance and usage into larger fan bases.

"The Dragons are excited by how quickly sport has entrenched into the metaverse. It made complete sense to develop a partnership with The Lovechain and the vastly growing possibilities of cryptocurrency and blockchain technology," says Webb.

"We look forward to working with The Lovechain to advance our game day experience and find new ways to further connect the club with our fans through engagement, reward programs and monetization opportunities through NFTs."

Increased usage of referral programs integrated on the blockchain aims to be a milestone for the Dragons, fostering engagement and incentivisation. With The LoveChain’s inbuilt marketplace and merchants such as Asics, Radisson Hotel, and Swarovski, users can purchase products and merchandise, building global brand awareness.

The LoveChain is a new social media platform with its own e-commerce marketplace built on the Algorand blockchain incorporating its own cryptocurrency (and payment system) that celebrates all the people and things we love. The LoveChain is also the first social media platform in the World that will allow a user to create an NFT from the content they create and post which they can share, sell or place on marketplaces. They will have their own NFT Marketplace. The LoveChain e-commerce store will be the first e-commerce store in the World focussed on the love economy which is a spend of in excess of USD$400 billion per annum and growing.

The St. George Illawarra Dragons is an Australian professional rugby league football club, representing both the Illawarra and St George regions of New South Wales and one of the most famous and iconic sporting brands in Australian and New Zealand sport.. The club has competed in the National Rugby League since 1999 after a joint-venture was formed between the St. George Dragons (est. 1921) and the Illawarra Steelers (est. 1982). They officially formed as the game's first joint-venture club on 23 September 1998 and it remains the only inter-city team in the NRL.The team has its headquarters and leagues clubs in both Wollongong and the Sydney suburb of Kogarah, and trains and plays games regularly at WIN Stadium in Wollongong, as well as at Jubilee Oval in Kogarah. The St George club won 15 premierships including 11 in succession between 1956 and 1966, still a current world record for professional sporting competitions.

For more information about The Dragons visit: www.dragons.com.au