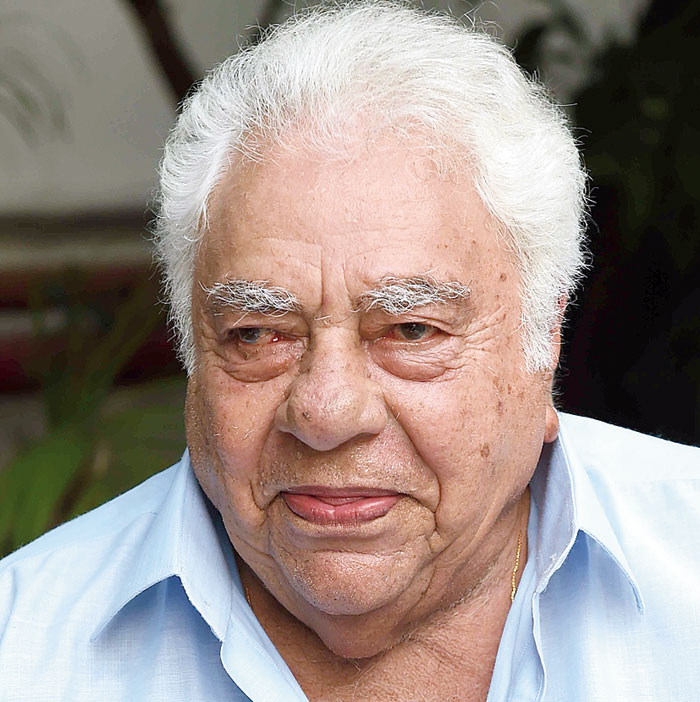 The 82-year-old Engineer, who played 46 Tests for India, made the claim while ridiculing the credentials of India’s five-member selection panel. Engineer said he saw one of these five men serve tea to Anushka during the World Cup in England but didn’t name anyone.
Telegraph picture
Indranil Majumdar   |   Calcutta   |   Published 31.10.19, 08:28 PM

Actress Anushka Sharma, who is married to India’s cricket captain Virat Kohli and has often been damned for her husband’s on-field failures, on Thursday lashed out at “false and fabricated news” that she says has dogged her over the years, her outburst triggered by a claim of former wicket-keeper Farokh Engineer that she sat with the selectors and was served tea by one of them during the World Cup in England.

The 82-year-old Engineer, who played 46 Tests for India, made the claim while ridiculing the credentials of India’s five-member selection panel. Engineer said he saw one of these five men serve tea to Anushka during the World Cup in England but didn’t name anyone.

Speaking to The Telegraph on Thursday after Anushka issued a statement on Twitter slamming the claim, Engineer said his intention was never to “demean” the actress. But he reiterated his claim that a selector did get tea for Anushka.

“I was sitting with a group of former India players during a match at the World Cup when I saw this guy with an India blazer who was getting Anushka a cup of tea. When I checked who he was, I was told he was a member of the selection committee.

“But I never wanted to demean her. It was said off the cuff and not much should be read into it. There was no offence intended against anyone,” Engineer said.

A livid Anushka took to Twitter to respond to what she said were “ill-intended lies”.

“The latest version of these ill-intended lies is that I was being served tea by selectors at matches during the World Cup! I came to one game during the World Cup and sat in the family box and not the selectors box as reported but when has the truth mattered when it’s about convenience!” Anushka said, ending her note by sardonically stating, “for the record, I drink coffee”.

MSK Prasad, outgoing chairman of the selection committee, lashed out at Engineer for “unwarranted comments” and “deriving sadistic pleasure by indulging in petty talk”.

Another member of the selection committee dismissed Engineer’s charge as “utter rubbish and concoction of facts”. “Engineer obviously has an axe to grind… Anushka never sat with us during the World Cup. There was no question of offering her tea or coffee,” the selector told this newspaper, speaking under cover of anonymity.

Engineer said he has the “highest regard” for Anushka and Virat.

“Anushka is a lovely girl. I have huge respect and admiration for her. She’s so dignified and a role model to millions of Indians across the world. I don’t know why she’s so upset as I never wanted to hurt her.

“She’s like my daughter and I admire her and Virat… She could have got some wrong messages from certain quarters and that may have prompted her to react in such a manner. But we are proud to have known her as Virat Kohli’s wife.

“Anushka’s presence is always inspirational. She’s not at all at fault for all this. Some people are making a mountain out of a molehill. I’m sorry if it has been taken in the wrong way,” the Manchester-based Engineer told this paper.

This is not the first time that Anushka has been trolled. Virat’s “lady love” had travelled to Sydney to bring him luck during the World Cup semi-final against Australia in 2015. It didn’t help though as Virat was dismissed for one run in a disastrous chase and India crashed out. Anushka was blamed for Virat’s failure on social media.

It didn’t stop there as Virat struggled with his form and during the ICC World T20 the following year, he posted an image which contained the words ‘SHAME’ and wrote: “Shame on people for trolling @AnushkaSharma non-stop. Have some compassion. She has always only given me positivity”.

I have always been of the opinion that maintaining silence on false & fabricated news and stories against one is the best way to deal with your detractors. This is how I have handled my career for 11 years now. I always saw dignity & truth embedded in the shadow of my silence.

They say, say a lie so many times repeatedly that it starts to look like the truth and I am afraid this is what has been happening with me. My silence has made the lies spitted against me seem true but that ends today.

I have stayed quiet through all the times I was blamed for the performance of my then boyfriend, now husband Virat and continue to take the blame for the most baseless things involving Indian cricket. I kept quiet then. My name has been used

in fabricated stories claiming that I am part of close-door team meeting and influenced selection processes and I have kept silent. My name has been wrongfully used to say how I have been given preferential treatment or how I have overstayed my authorised time with my husband on foreign tours which if anyone really cared about finding facts from the board, would know that I have always and always followed protocol but yet, I kept quiet.

My name was used for false stories to make it look like the board was being bothered for my tickets or security, etc when in reality I bought my own tickets for matches and flights and I still kept quiet. I was asked to stand in a group photo by the High Commissioner’s wife despite my hesitation to be in it, and a huge issue was created over this blaming me for intentionally wanting to be part of it and the said event, even though I was invited for it. An official clarification was issued by the board on the same and I still kept quiet. And the latest version of these ill-intended lies is that I was being served tea by selectors at matches during the World Cup! I came to one game during the World Cup and sat in the family box and not the selectors box as reported but when has the truth mattered when it’s about convenience! If you want to have a comment on the selection committee and their qualifications please do so as it’s your opinion but don’t drag my name into it to substantiate your claim or sensationalise your opinion. I refuse to allow anyone from using my name in such conversations.

It’s not like this last piece of ‘news’ has upset me more and that’s why I have decided to break my silence. They have all been as regressive and horrible and malicious and vicious. So, don’t take this letter as my retort to this ‘news’. Today, I have decided to speak up because someone’s silence cannot be taken as their weakness. I am not and will not be a pawn to be used by anyone’s thoughts or beliefs or agendas and next time you want to use my name to discredit someone or the board or even my husband, do it with facts and proof & leave me OUT of it. I have led my life, built my own career with utmost dignity and I am not going to compromise that for anything. Maybe, it’s hard for some to believe that, because, I am a self-made, independent woman who only happens to be the wife of a cricketer. … and for the record, I drink coffee.