After Mohun Bagan, ATK on top 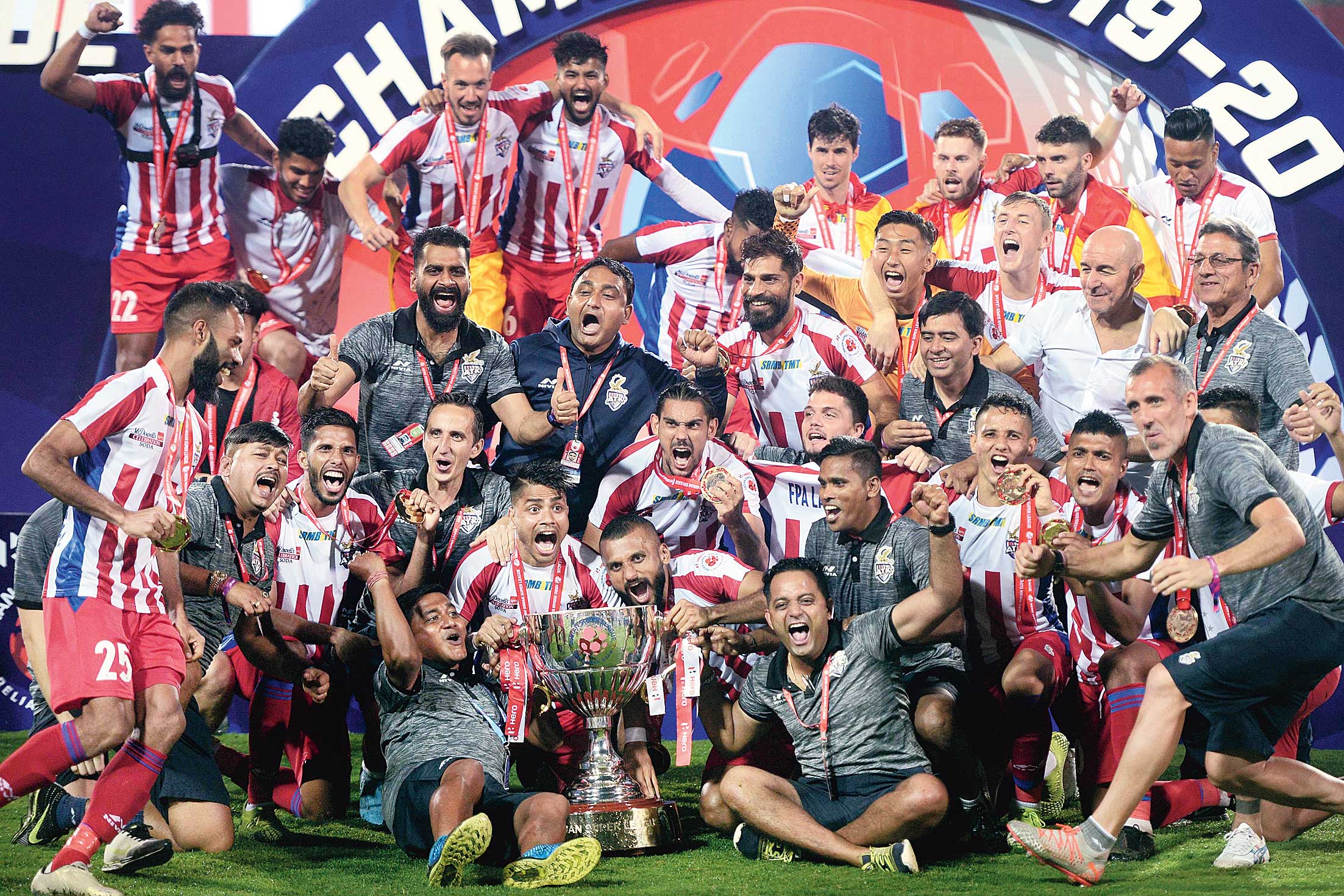 ATK defeated Chennaiyin FC 3-1 in the final of the Indian Super League at the Jawaharlal Nehru Stadium in Margao on Saturday.

Javier Hernandez (10th minute) and Edu Garcia (48th) put ATK in the driving seat but Nerijus Valskis (69th) reduced their advantage to set up a tense end to the contest. Hernandez scored his second gola in injury time (90+4) to confirm a record third title for the Calcutta-based franchise.

It was a double bonanza for prinicipal owner Sanjiv Goenka. On Tuesday, Mohun Bagan had sealed the I-League title. ATK and Mohun Bagan officially merge on June 1 and will play as one entity ISL VII onwards.

The final was off to a blistering start as Andre Schembri made a good run on the right in the first minute and found Rafael Crivellaro in the centre with a good cross, but the Brazilian missed the target. Minutes later, Schembri threatened again, this time with a pass to Valskis, whose shot hit the crossbar.

ATK drew first blood with their first major shot at the goal in the 10th minute. John Johnson’s cross-field ball found Roy Krishna on the left flank who delivered a good cross towards the edge of the box. Hernandez, who was left unmarked, smashed a half-volley to beat goalkeeper Vishal Kaith.

The contest remained open but Chennaiyin suffered an injury setback midway through the first half. Midfielder Germanpreet Singh had to be replaced and Edwin Vanspaul took his place.

ATK went close to doubling their lead in the 23rd minute out of utter chaos inside the box which produced three back-to-back attempts. Krishna cut in from the right and unleashed a powerful strike which was saved by Kaith. Hernandez then had the ball at his feet twice, but on both occasions, his shot was blocked.

Chennaiyin put pressure on the ATK defence and carved out a golden chance from a free-kick after the 30-minute mark. Schembri met Crivellaro’s delivery into the box but Arindam Bhattacharya pulled off an excellent save to keep ATK’s lead intact.

The scoreline remained 1-0 in favour of ATK at the break, but Krishna had to be replaced by Mandi Sosa due to an injury.

ATK scored the all-important second goal and doubled their advantage two minutes into the second half. Williams picked up the ball in midfield and fed Edu Garcia into the box. The Spanish midfielder beat Kaith with a neat finish from an acute angle to make it 2-0.

The Chennaiyin attack struggled to create clear-cut chances and their opponents restricted them to long-range efforts. Lallianzuala Chhangte attempted a pile-driver from outside the box before the hour mark but sent the ball wide.

Chennaiyin finally found a way past the ATK defence in the 69th minute. Laldinliana Renthlei played a neat one-two with Anirudh Thapa on the right before sending a cross into the centre of the box.

Pritam Kotal’s headed clearance fell to Jerry Lalrinzuala who passed the ball to Valskis in the centre. The Lithuanian striker found the net with a powerful strike to score his 15th goal of the season and give Chennaiyin a lifeline.

Chennaiyin built one attack after another as the game neared full-time but ATK kept them at bay.

ATK got their third goal of the night and struck the final blow in the last minute of injury time. Substitute Pronay Halder lifted the ball over the Chennaiyin defence into the path of Hernandez who slotted the ball home.