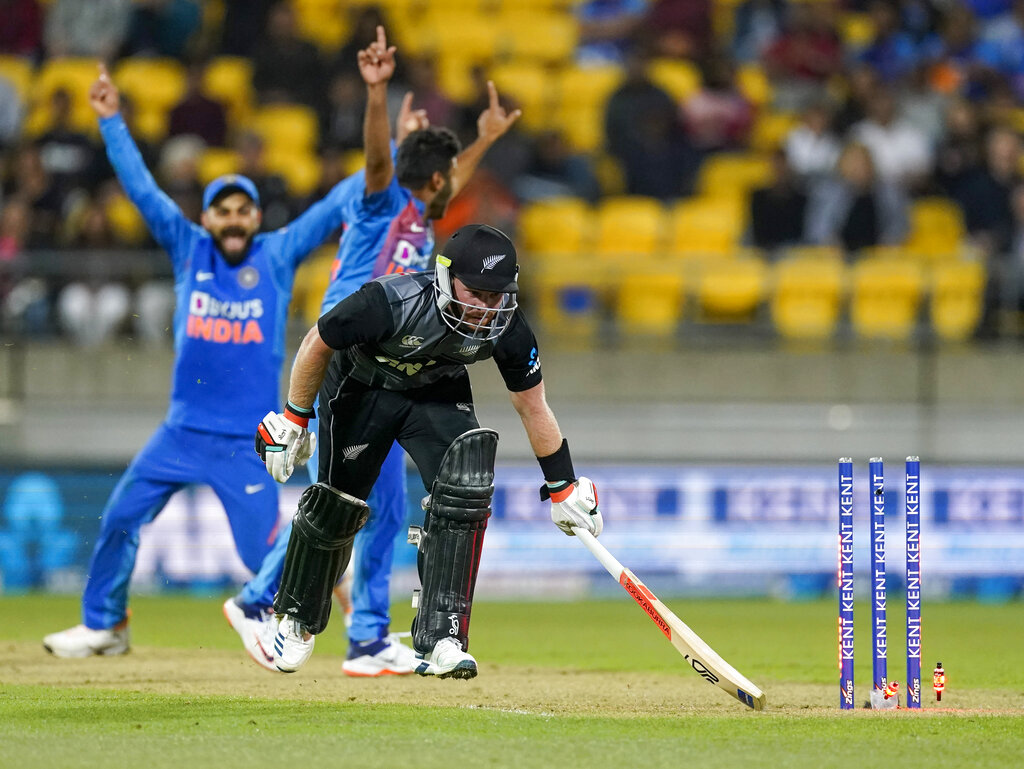 A nervous New Zealand threw it away yet again as a perseverant India prevailed in the Super Over for the second successive time to take a 4-0 lead in the T20 International series in Wellington on Friday.

Needing just 11 runs off the last two overs with seven wickets in hand, New Zealand dug a hole for themselves yet again, taking the game to a Super Over two nights after doing the same in Hamilton.

New Zealand managed 13 runs in six balls and India got there effortlessly.

'What's happened in last two T20 games is unbelievable...We are very proud of how we went about our business today,' said India captain Virat Kohli, who struck the winning four in the game.

K.L. Rahul smashed 10 runs off the first two balls before he was caught. Then, a fired-up Kohli and Sanju Samson finished the game in style.

'It is very tough. To get ourselves into the position we got today and then give them a chance... India grabbed it with both hands,' said New Zealand stand-in skipper Tim Southee, who delivered the Super Over for his side.

This was after New Zealand won a fourth consecutive toss and opted to field. Their regular captain Kane Williamson didn't take part in the match owing to a shoulder niggle.

The Indians weren't off to a great start but Manish Pandey proved his value to the team with an unbeaten 50 off 35 balls, taking the visitors to 165 for eight from 88 for six in the 12th over.

India's total wasn't enough considering the batting-friendly conditions but the hosts made life a lot tougher for themselves from a commanding position before succumbing to pressure.

Mohammed Shami, who was rested on Friday, had bowled a brilliant 20th over on Wednesday and man of the match Shardul Thakur was up to the task this time, conceding just six runs when the opposition needed seven for victory.

With the series already in the bag, India gave opportunity to Sanju Samson, Washington Sundar and Navdeep Saini for the first time in the five-match series, resting Rohit Sharma, Ravindra Jadeja and Shami. However, none of them was able to make an impact in the game.

Chasing 165, New Zealand lost Martin Guptill early. But Munro and Seifert put on 74 runs for the second wicket to put themselves on track.

Munro scored a half-century of 38 deliveries, inclusive of six fours and three sixes. He was out against the run of play as Kohli's direct hit surprisingly found the target after a relay throw from the deep.

It was the turning point as New Zealand lost regular wickets. Yuzvendra Chahal bowled Tom Bruce (0), but Seifert found a partner in Ross Taylor as they pushed the score past 150 in the 18th over.

Seifert scored a half-century off 32 balls, including four fours and three sixes. But the great choke was yet to come again. Needing 18 off 18, the Black Caps lost four wickets in the last over bowled by Thakur.

Taylor holed out of the first ball, while Seifert was run out two balls later. Daryl Mitchell (4) was caught next and Mitchell Santner (2) couldn't steal two runs off the last ball as the sides engaged in a tie-breaker for the second game running.

Put in to bat, the visitors were struggling at 88-6 at one stage before Pandey's lonesome rescue act took them to a respectable total. KL Rahul contributed 39 runs off 26 balls, inclusive of three sixes and two fours.

Leg spinner Ish Sodhi got into the act and ran through India's batting order. First to go was Shreyas Iyer (1) and then Shivam Dube (12) was caught at mid-wicket. Sodhi finished with 3-26.