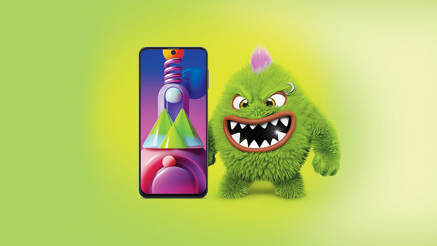 Barring a few, most smartphone batteries even in 2020 can’t keep up. One keeps hearing about all-day battery life but reality is otherwise. The problem is that batteries improve at a slow pace but phone power consumption is growing at a faster rate. Newer the smartphone, more its demands — high-resolution screens and power-draining apps. Plus, there is our basic inability to put the phone down, especially during the pandemic.

There have been some impractical solutions in the last year or so, like the Energizer Power Max P18K Pop. As mouthful as the phone’s name is its battery life — 18,000mAh but at 18mm of thickness it looked more like a phone being stuck to a battery.

A solution seems to be on the horizon — Samsung Galaxy M51, which comes with a 7,000mAh battery. That should be powerful enough to last at least a couple of days. It’s probably the best option we have until news of changing battery materials become a reality.

Ahead of the phone’s launch on September 10, we spoke to Asim Warsi, senior vice-president, Samsung India.

How is the Galaxy M series placed at the moment?

We are right now in the second half of 2020 and we’re seeing a very strong growth in our online business. We are expecting a growth of over 100 per cent in H2 versus the same time last year, which is the second half of 2019. We see the M series in the thick of that growth because it is designed for the young Indian millennial consumers. These are consumers who predominantly shop online, so it was designed for their needs. We launched it a little more than a year ago in early 2019. In this relatively short period the series has grown to become a very large brand franchise in India. In fact, by the end of 2020 the M series as a portfolio — since its launch — will be a greater than $3.5 billion dollar franchise in terms of gross merchandise value, which is the consumer’s paid-up price.  The series is doing very well for us and more so now.

You have had more M series launches this year than in 2019.

Galaxy M51 will be our eighth phone in the series in 2020. It is our most powerful device in the portfolio at the moment. It comes with a 6.7-inch Super Amoled Plus display. So it’s the flagship-grade display coming for the first time in the M series. It comes with a powerful Snapdragon 730G processor, which is a gaming-oriented processor, and is also very powerful for multitasking. There is also a 64MP quad camera set-up and a 32MP front camera.

If all this is not powerful enough, it has something the M series has always taken pride in — a powerful battery. We’re pushing innovation in the battery segment to the next level; there is a 7,000mAh battery, probably making it the only smartphone in the world to have this at the moment.

What are the benefits of hitting the 7,000mAh mark?

When you look at the inception of the M series which happened in February last year, we delivered for the first time a phone that came with a 5,000mAh battery while keeping the phone light and slim. By September last year, for the first time, 6,000mAh battery came. One year down the line, it’s 7,000mAh. We have been continuously working on our hardware as well as software to push the envelope.  It was necessary to have specs that did justice to the battery. You name it, and it’s there while keeping the device price under Rs 30,000.

With the pandemic, consumer behaviour is changing rapidly and as more and more people are working from home, it was necessary to deliver a powerful device. The phone has a large, immersive display, which helps whether you are working on a spreadsheet or studying or simply gaming. Another interesting point is that the phone allows reverse charging.

One should also remember that the M series was designed for the Indian consumer and it has been so successful that the series has gone global. It’s expected that the M51 will also launch in other markets. Frankly, 7000mAh takes the phone into the realm of tablets.

Any schemes to draw in more customers?

We have taken a few special steps. There is the Samsung Referral Programme. The beneficiary gets to enjoy handsome discounts and incentives. We’ve also launched a Samsung Student Advantage programme, which, as the name suggests, targets students, especially undergraduates who can enjoy discounts when they shop on Samsung.com. The third thing is the 20K Advantage programme. It’s a global first for us. Consumers can get coupons worth up to Rs 20,000 to purchase their favourite Samsung product, across several categories. Finally we have Galaxy Forever, in which a consumer can buy a phone (like the Galaxy S20) at 60 per cent of the cost; the balance can be paid later, after a year of purchase (or return the device at the end of one year).