Why a newborn now will miss 150 stars in adulthood 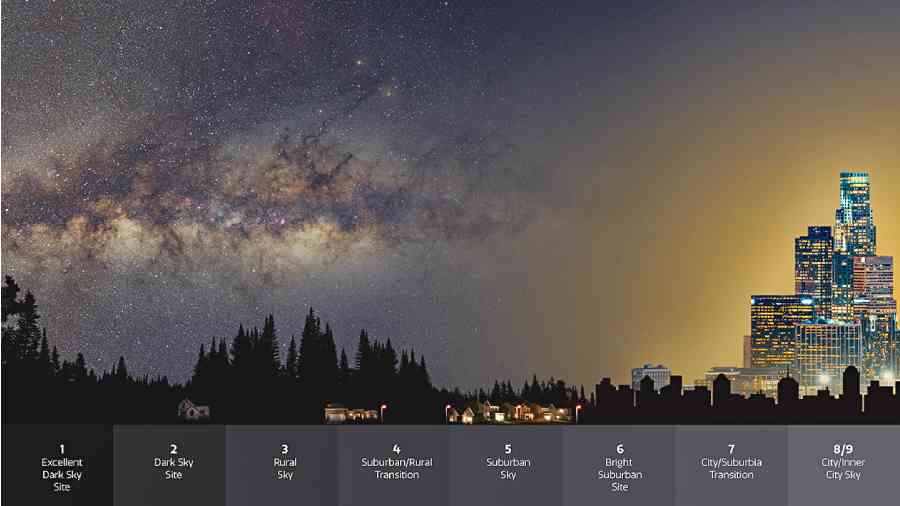 Rising levels of artificial light are robbing the night sky of its stars across the world, scientists said on Thursday, releasing a study that has estimated an average loss of five per cent stars every year.

The first ground-based global assessment of the sky’s glow at night caused by light pollution has indicated that a child born in an area where 250 stars are visible to the naked eye would see fewer than 100 stars 18 years later.

The study, published in the US research journal Science, has estimated that skyglow has increased 7 per cent to 10 per cent per year which is equivalent to a doubling of the night sky’s brightness in less than eight years.

“The star loss rate isn’t steady and will vary from place to place,” Christopher Kyba, a scientist at the GFZ German Research Centre for Geosciences who led the study, told The Telegraph.

“We’ll lose more stars per year in the early years and as the night sky gets bright and brighter, it takes more time for each star to disappear.”

Kyba and colleagues relied on over 51,300 citizens’ observations of naked-eye visibility of stars from 2011 to 2022 from locations across the world — the scientists asked citizen volunteers to compare star maps of the night sky to what they could see at their own locations through an online platform called “Globe at Night”.

“The results show that despite everything that we’ve learned about light pollution in the past few decades, as a society we are not taking effective action against it and the problem is continuing to get worse,” Kyba said.

Under the 5 per cent star loss rate, a location where 250 stars are visible would lose 13 stars over the first year, then 12 stars in the second year, and 11 stars during the third year, leading to fewer than 100 stars in 18 years.

“A sad outcome of such illumination is that a third of humanity can’t experience the grandeur of the Milky way galaxy,” said Niruj Mohan, an astronomer at the Indian Institute of Astrophysics, Bangalore, who was not associated with the study.

The 7 per cent to 10 per cent increase in night brightness estimated by the new study is much higher than earlier estimates of about 2 per cent based on satellite observations.

But scientists say the satellites used to measure skyglow are blind to the wavelengths of light produced by modern light-emitting diodes that have replaced the older lamps to dominate lighting over the past decade.

The satellites are also unable to detect light emitted horizontally from LED billboards and building facades.

“Dark skies are becoming rarer across India too,” Mohan said. “But Ladakh remains one of the darkest areas in the country and the site of an astronomical observatory.”

The Union science ministry and the Ladakh government had announced in September last year plans to establish India’s first “dark sky reserve” around the 22-year-old observatory in Hanle in Ladakh to preserve the site’s attractiveness for astronomy and astrotourism.