The tiny microchip is the product of a huge endeavour. Taking a look at how semiconductors are fabricated 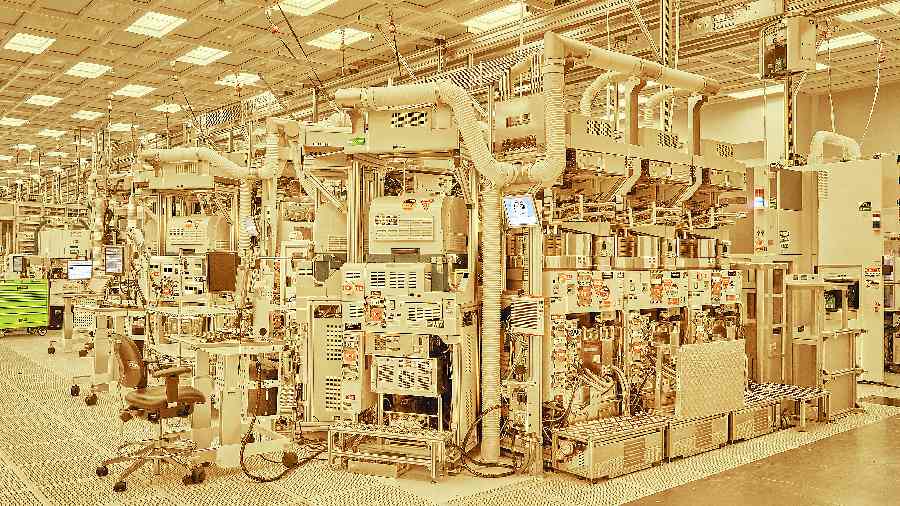 Some feature more than 50 billion tiny transistors that are 10,000 times smaller than the width of human hair. They are made on gigantic, ultraclean factory room floors that can be seven stories tall and run the length of four football fields.

Microchips are in many ways the lifeblood of the modern economy. They power computers, smartphones, cars, appliances and scores of other electronics. But the world’s demand for them has surged since the pandemic, which also caused supply-chain disruptions, resulting in a global shortage.

That, in turn, is fuelling inflation and raising alarms that the US is becoming too dependent on chips made abroad. The US accounts for only about 12 per cent of global semiconductor manufacturing capacity; more than 90 per cent of the most advanced chips come from Taiwan.

Intel, a Silicon Valley titan that is seeking to restore its longtime lead in chip manufacturing technology, is making a $20 billion bet that it can help ease the shortfall. It is building two factories at its chip-making complex in Chandler, Arizona, US, that will take three years to complete, and recently announced plans for a potentially bigger expansion, with new sites in New Albany, Ohio, US, and Magdeburg, Germany. Why does making millions of these tiny components mean building — and spending — so big? A look inside Intel production plants in Chandler and Hillsboro, Oregon, US, provides some answers.

Chips, or integrated circuits, began to replace bulky individual transistors in the late 1950s. Many of those tiny components are produced on a piece of silicon and connected to work together. The resulting chips store data, amplify radio signals and perform other operations; Intel is famous for a variety called microprocessors, which perform most of the calculating functions of a computer.

How Chips Are Made

Companies must spend heavily to develop the complex processing steps used to fabricate chips from plate-size silicon wafers — which is why the factories are called “fabs”. Enormous machines project designs for chips across each wafer, and then deposit and etch away layers of materials to create their transistors and connect them. Up to 25 wafers at a time move among those systems in special pods on automated overhead tracks. Processing a wafer takes up to two months.

After processing, the wafer is sliced into individual chips. These are tested and wrapped in plastic packages to connect them to circuit boards or parts of a system. That step has become a new battleground, because it is more difficult to make transistors even smaller. Companies are now stacking multiple chips or laying them side by side in a package, connecting them to act as a single piece of silicon.

A piece of dust invisible to the human eye can ruin a chip. So fabs have to be cleaner than a hospital operating room and need complex systems to filter air and regulate temperature and humidity. Fabs must also be impervious to just about any vibration, which can cause costly equipment to malfunction. So fab cleanrooms are built on enormous concrete slabs on special shock absorbers. Also critical is the ability to move vast amounts of liquids and gases. The top-level of Intel’s factories, which are about 70 feet tall, have giant fans to help circulate air to the cleanroom directly below. Below the cleanroom are thousands of pumps, transformers, power cabinets, utility pipes, and chillers that connect to production machines.

Fabs are water-intensive operations. Water is needed to clean wafers at many stages.  Intel’s two sites in Chandler collectively draw about 11 million gallons of water a day. Intel’s future expansion will require considerably more, a seeming challenge for a drought-plagued state like Arizona, which has cut water allocations to farmers.

How Fabs Are Built

Intel will need 5,000 skilled construction workers for three years. Excavating the foundations is expected to remove 8,90,000 cubic yards of dirt, said Dan Doron, Intel’s construction chief. The company expects to pour more than 4,45,000 cubic yards of concrete and use 1,00,000 tons of reinforcement steel for the foundations — more than in constructing the Burj Khalifa in Dubai, UAE. Some cranes for the construction are so large that more than 100 trucks are needed to bring the pieces to assemble them, Doron said.  To address the chip shortage, Patrick Gelsinger, Intel’s CEO, will have to make good on his plan to produce chips designed by other companies. But a single company can do only so much; products like phones and cars require components from many suppliers, as well as older chips. Though boosting domestic manufacturing can reduce supply risks somewhat, the chip industry will continue to rely on a complex global web of companies for raw materials, production equipment, design software, talent and specialised manufacturing.