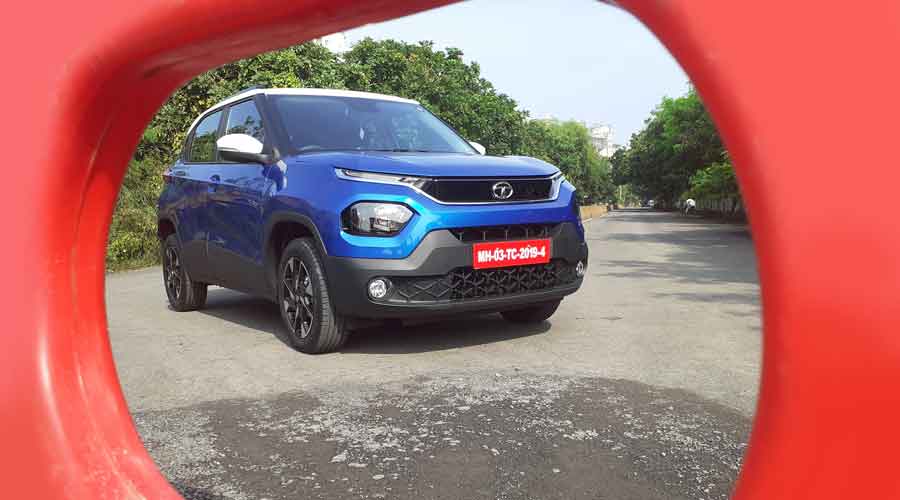 If there is temptation, the easiest and, sometimes, the best thing to do, is to succumb. We were in Navi Mumbai at the invitation of Tata Motors to drive two versions, an manual shift and an AMT (automated manual transmission), of what the carmaker calls its first-in-category ‘micro-SUV’, the Punch, that it would be launching on October 20.

With the Western Ghats and, therefore, hill roads just 80km or so away, it seemed such a waste if we didn’t try out the SUV on some nice bendy bits since it seemed to be so eager to go around corners and was quite adept at it. So that’s where we were headed with barely two-and-a-half hours in hand to return to Vashi with just enough time to reach the airport to catch the flight back home. 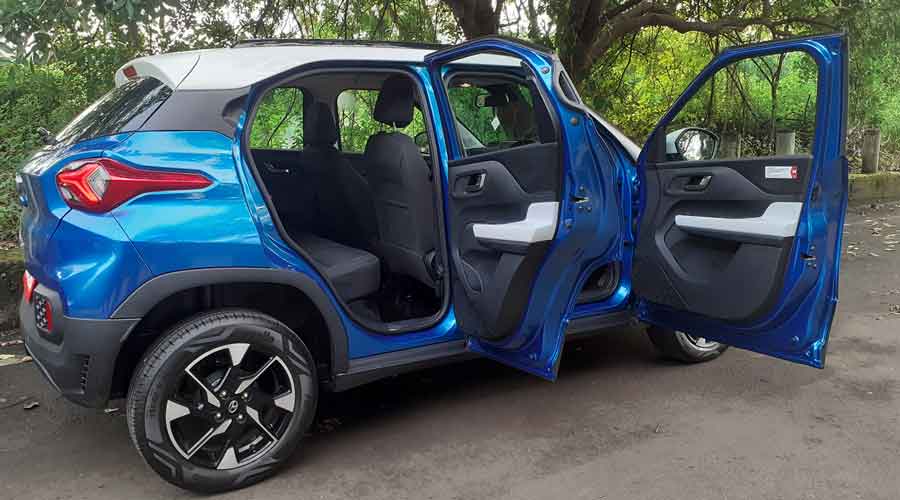 Now the road leading up to the ghats is a 100kmph expressway and and, of course, we had a shade less time than needed for a leisurely drive, so setting a brisk pace was imperative, not that we would have done anything else even if we had all the time in the world.

There was, of course, the tracking car to deal with. Its driver Shivshankar was a helpful man who had been assigned to assist in case  we got into trouble. But he was in a commercial vehicle with an 80kmph speed cap. So after every quick burst, we’d have to stop to let him catch up. This was eating up time. So, after a few times we dialled the gent, told him what the plan was to drive the ghat roads and turn back. So he just had to do the same. And we were gone. 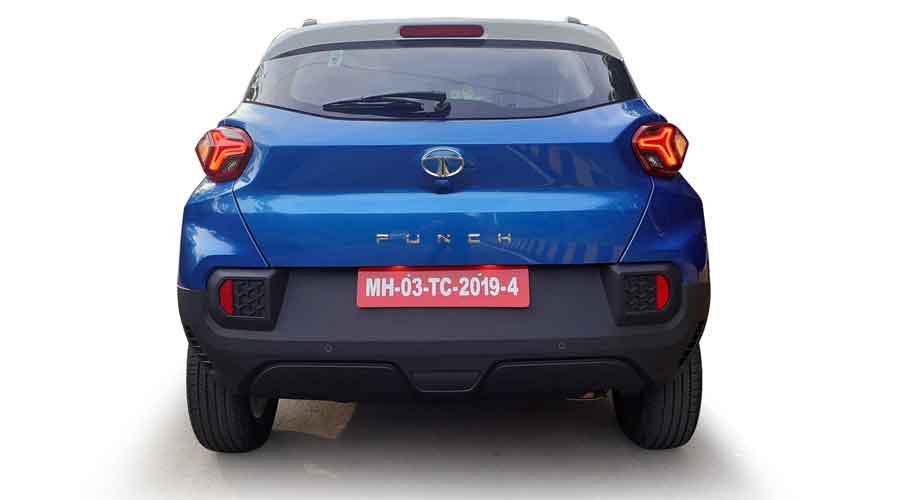 There has been much interest about the Punch since it was displayed at Auto Expo 2020 as the HBX Concept. It looked the part of an SUV with knobby tyres, roof rack, et al, but in a small overall package. This, on paper, could be the SUV for those who liked what SUVs could do, but didn’t want to deal with a big vehicle. It also had the Tata corporate look and was pretty obviously the smaller sibling of the Harrier and Nexon. The look was chunky but feisty one.

Apart from doing away with the faux scuff plates all around and spotlights on the grille as well as swapping out the knobbly tyres for normal road-going ones, Tata has remained pretty much true to the concept. The result is a visually appealing one for those who like their SUVs brawny and muscular, no matter how big it is. There is a lot of black plastic cladding all around, and that just adds to the off-road cred that the Punch wants to project. 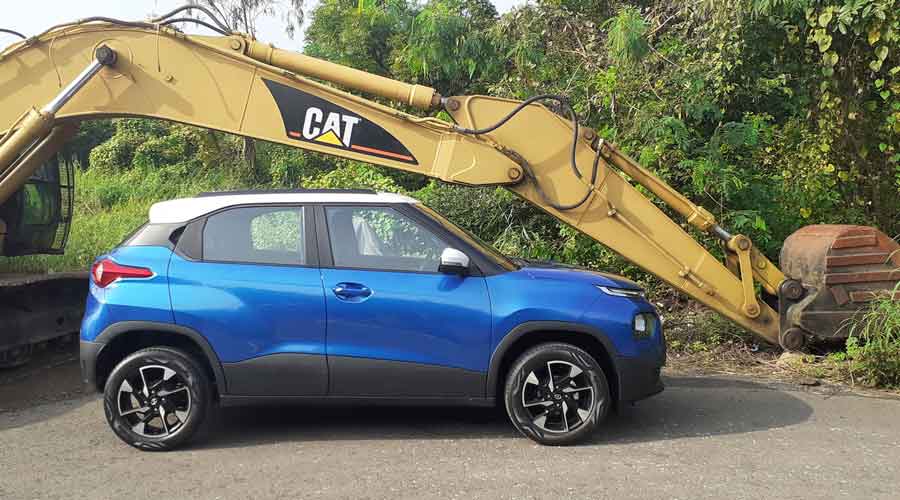 The looks are chunky with flared fenders

The look of the rear tail lamps is interesting as it incorporates the company’s tri-arrow pattern. Up front, the projector beam headlamps and fogs sit in the bumper, much like the Harrier, while the DRLs are just below the contoured bonnet.

Most car companies are getting innovative with wheel designs and the Punch does it too. The two-tone alloys are sharp looking and give the profile a lift. In the two-tone paint schemes, the floating roof also looks smart.

Much thought has gone into this space, as it should. The result is something that appeals both to the eyes as well as the head. To begin with, the doors open 90° and make getting in and out very easy, even for the elderly. The seating is fairly upright and bolstering good, which makes longer drives comfortable. 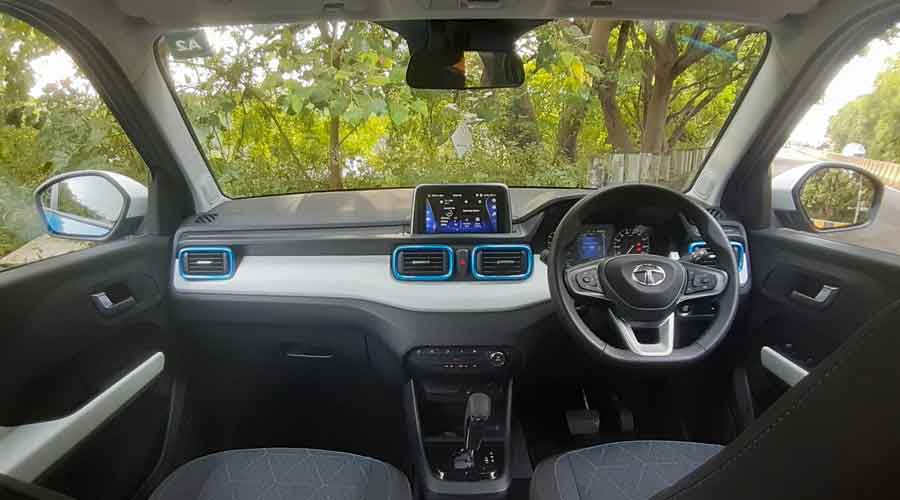 The interiors of the Punch are smart, the glass area is quite large and there is an overall sense of airiness. Some bits are familiar from the Altroz

Lateral support is adequate. Front and rear legroom is quite generous and for rear seat passengers, the feet can go under the front seats to allow them to stretch a bit. The flat floor at the back helps the middle passenger. With two at the back, there is an arm rest that can be used. Head room is good too and large glass areas do their bit to keep things airy in the mainly black passenger compartment.

The 366-litre boot has space for a couple of suitcases and some smaller bags too. This car comes not only with a spare wheel but also a puncture repair kit. That’s a first that we have seen. Inside there are cubby holes for smaller items and water bottles. The glove box is a cooled one on higher spec models.

In front the driver’s seat gets a height adjuster, which is a good for accommodating people of all heights. The ergonomics are good and the dashboard is smart colour-coded surrounds for the aircon vents. 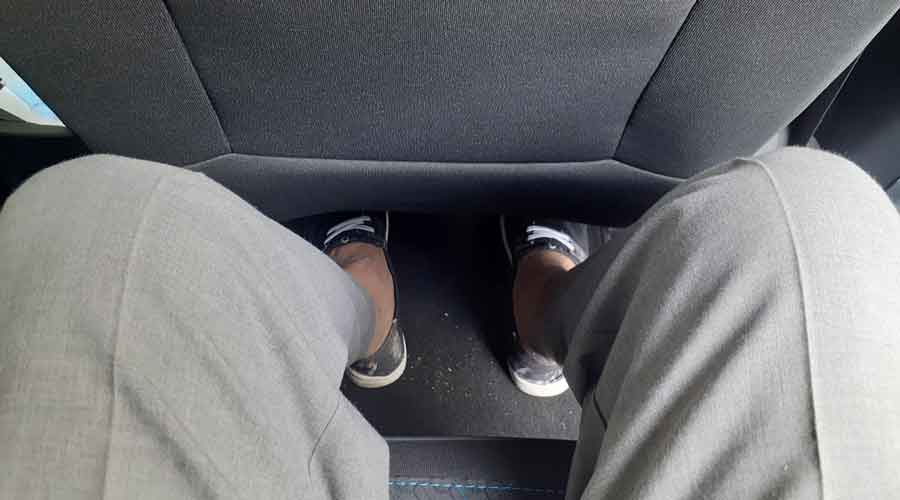 A swathe of light plastic across the dash lightens things up as well as splits the heft. Thankfully, it’s convex here and not reflective either. It’s a little tardy on the USB port and 12V socket front, with not too many to go around for a connected family.
The quality of touch points, including the feel of switches, is good. Some bits, like the instrument cluster and steering, are familiar from the Altroz hatchback, with which the Punch shares its platform. 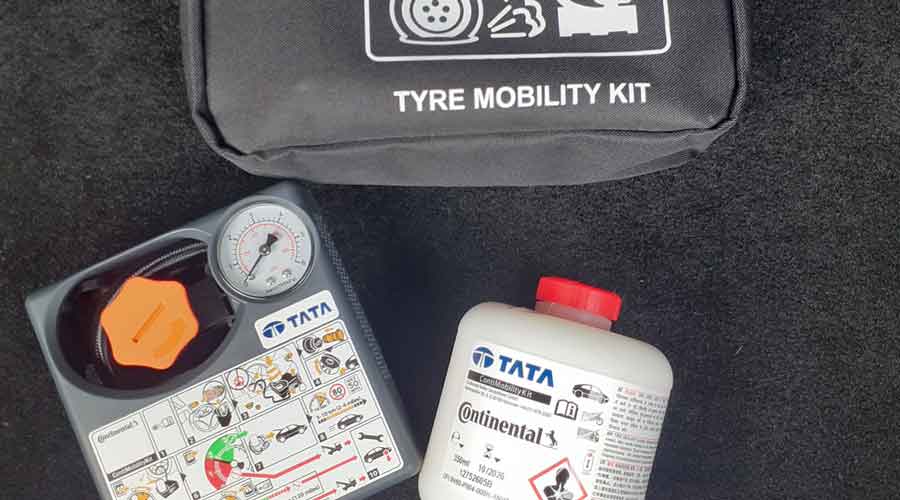 Along with a spare wheel, there is also a puncture repair kit that comes with the car

On the road, the Punch is poised. It is stable at speed. Ride is mostly good but one does need to slow down the really bad bits. Stability at speed is impressive and giving it some stick on hill roads was quite rewarding in the one with the manual gearshift. But one needs to keep the engine on the boil to have the power flowing. The chassis could do very well with the turbocharged petrol of the Altroz or even the diesel. With it’s fairly small footprint, it is nimble and can handle tight turns quite well. 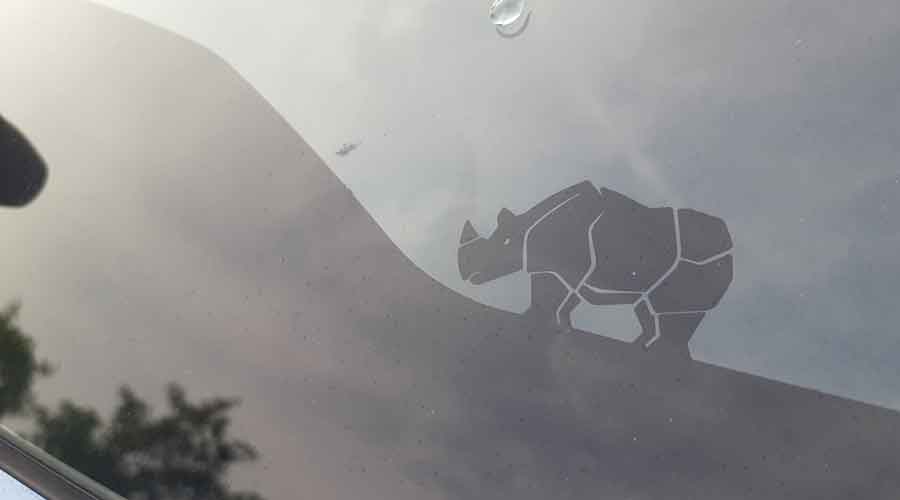 When there is wheel slippage on, say, ice, the car lets the driver know

Tata says that the Punch has off-road cred and had a demo to prove it. Ground clearance is good at 190+/-3mm unladen, which translates to about 165mm with load. So one doesn’t have to be on tenterhooks when tackling bad stretches. It also comes with some good safety aids. It has a Traction Pro mode that can help lock up the wheel that is slipping on an icy surface and help pull the vehicle out even if a single wheel is getting some grip. Also, even if one driven wheel is getting contact, it can pull the car through even if the other one doesn’t have contact. It can also wade through 370mm of water. So while it is not quite an off-roader, it can tackle a few things that they can and help get one out of sticky situations, but it would be unwise to push it too far beyond the milder stuff. 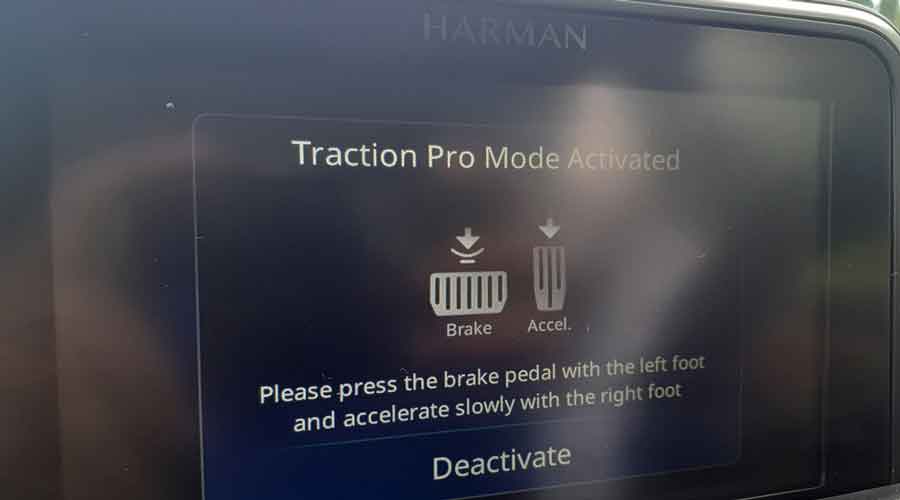 The only engine available as of now is the 1.2-litre 86ps, three-cylinder petrol motor that is also there in the Altroz. While it is quite an eager mill and is adequate in most situations, the chassis is good enough to handle some more, especially torque. But this one works very smoothly. We must mention that the AMT in this context. It is one of the smoothest ones we have come across so far and not sluggish in traffic at all. If one is looking for a city driver, this is probably the one to go for to keep the experience stress free. 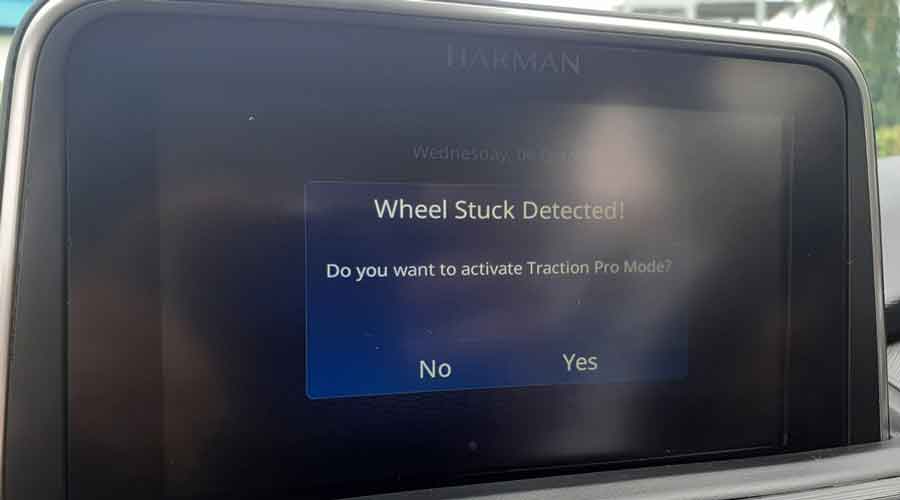 The Punch can be many things to many people. Given that it must slot in around the Rs 5.5 lakh to Rs 9 lakh bracket, it does offer a rather good package in many ways. Its greatest appeal is its combination of small size and good ground clearance to tackle the poor road conditions in many parts of the country. It can also be quite a bit of fun to throw around. For more of that we are hoping for the turbo.

The punch in numbers

Brakes: Discs up front, drums in the rear