A workshop on ceramic-based medical implants 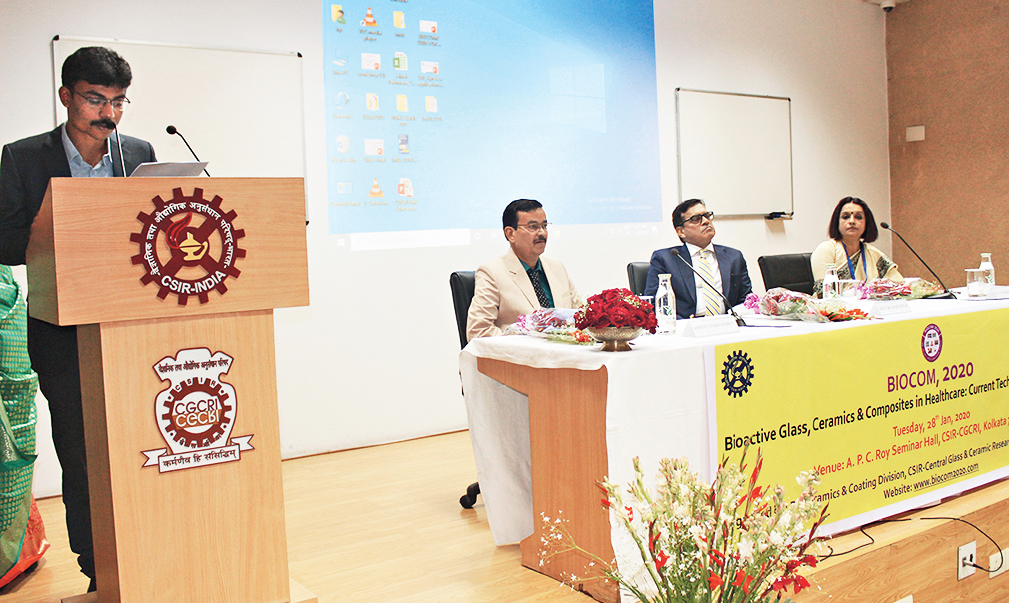 Ceramics is the ancient art of shaping objects from clay and baking them until hard. The remains of such pieces of intricate artistry, left behind as potshards, helped create timelines of many civilisations. In recent times, this technique has been mastered by material scientists to make components for repair and reconstruction of a diseased or damaged body part (especially the musculo-skeletal system). These materials — bioceramics and bioactive glasses — are not rejected by the body and can integrate seamlessly without adverse reaction.

Scientists at Calcutta’s Central Glass & Ceramic Research Institute (CGCRI), one of the oldest institutes under the umbrella of the Council of Scientific and Industrial Research (CSIR), have been working on the art and science of bioceramics for over five decades. With the aim of societal benefit, they have been developing novel implants and prostheses — such as ceramic joints used in hip or knee replacement, orbital eye implants, apart from newly-developed wound-healing material.

The best part of these innovations is their nominal cost. “Our research activities are targeted to provide state-of-the-art healthcare to all segments of the Indian population at an affordable cost. These technologies are also aligned to national missions such as Swasth Bharat, Make in India and Innovate in India,” iterated K. Muraleedharan, director of CGCRI, in a recent workshop, BIOCOM 2020.

“Nonetheless, few of the bioceramic-based prototypes produced at our labs have been commercialised because the field is still in a nascent stage and has to overcome a series of regulatory hurdles before technology transfer,” added Siddhartha Bandyopadhyay, head of the organising division of CGCRI. The workshop was designed to help scientists working in the healthcare domain get acquainted with each and every step of technology transfer — the process by which laboratory results are used by hospitals and clinics to treat patients.

Ajay Kumar Singh, director- general (life sciences), DRDO, ministry of defence, and chief guest, spoke about the challenges of applications of different materials — such as those used for wound-healing and making shockproof vests for soldiers. Materials scientist Bikramjit Basu of the Indian Institute of Sciences, Bangalore, mentioned how his team developed custom implants for orthopaedic, cardiovascular and dental applications using the latest three-dimensional printing technology. A. Ramkishan, deputy drugs controller (eastern zone), explained the latest regulatory steps and accelerated approval processes for new drugs. Srikanta Kumar Rath, a scientist at the Central Drug Research Institute at Lucknow, explained why bioceramic implants should not be harmful or toxic to living tissue.

One of the key speakers at the workshop was octogenarian Sujoy Kumar Guha, a biomedical engineer at IIT Kharagpur, who has spent four decades inventing and developing a male contraceptive implant called Risug (reversible inhibition of sperm under guidance). The drug, in the form of a synthetic polymer, was invented years ago but faced several hurdles until it crossed the final phase of clinical trials recently.

Working scientists from the bioceramics and coating division at CGCRI, Jui Chakraborty and Biswanath Kundu, convenor and co-convenor of the workshop respectively, presented their work on bioactive wound-healing material, orbital eye implants and ceramic coatings for surgical implants.

The workshop was attended by several healthcare professionals and entrepreneurs who delineated the route of a lab discovery from the bench to the bedside with a focus on orthopaedic applications.

“Such workshops can go a long way in providing a common platform for mutual sharing of knowledge, expertise and exchange of ideas amongst scientists, researchers, industry professionals and regulatory personnel,” said Ashim Kumar Chakraborty, chief scientist of the CGCRI.