The recipe for a lively universe 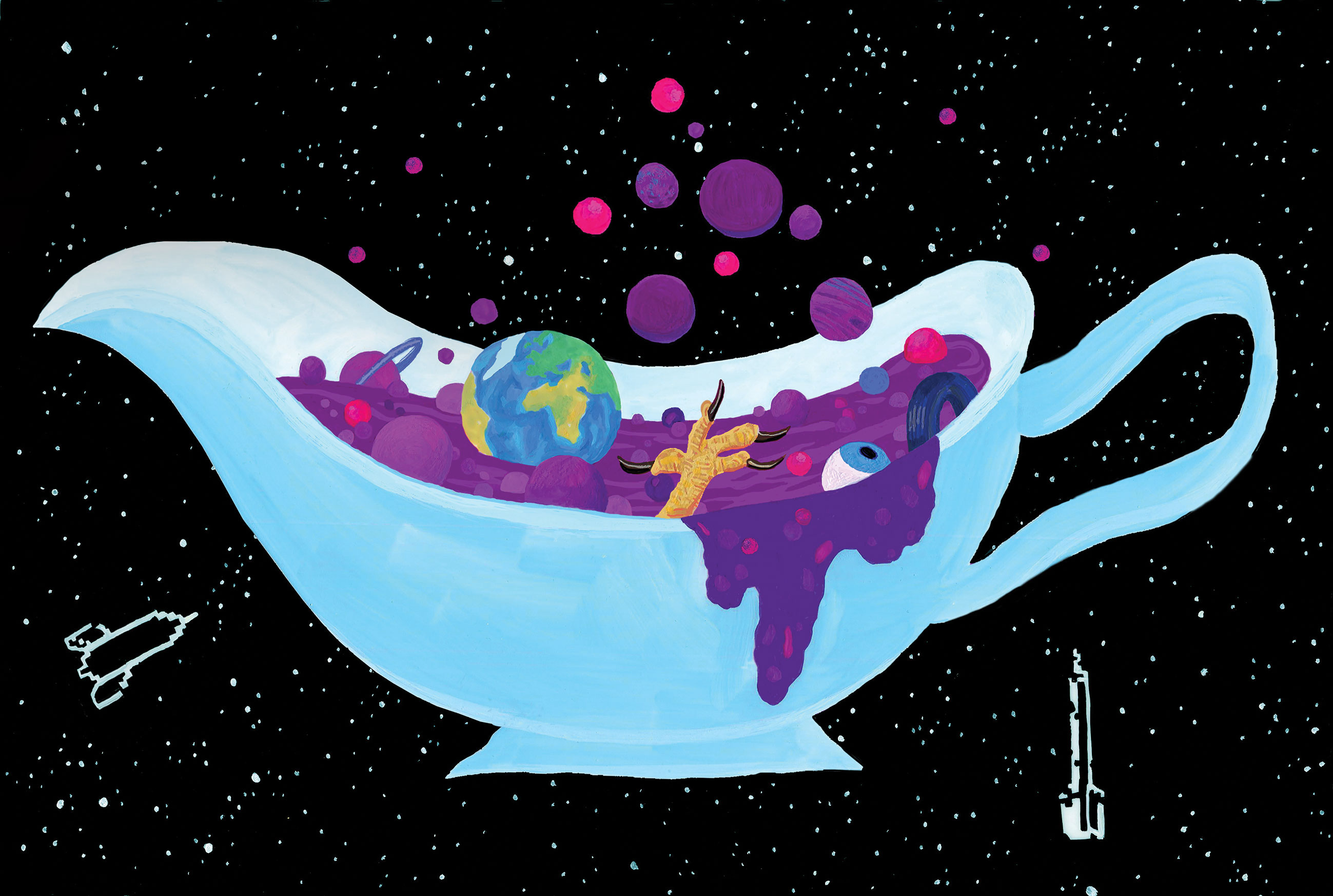 As Christmas approaches, would-be chefs and hosts, including apparently my editors, are perfecting their techniques for making the all-important gravy for the turkey and potatoes.

I have my moments as a cook — come over for my stardust waffles on Sunday morning — but I have never had the patience to master gravy, so it usually comes out lumpy. This is a problem at the dinner table. On the grandest scale, however, lumps are a good thing.

During the Big Bang 14 billion years ago, a fizzy stew of energy and gas emerged that became, and still suffuses, the universe. Astronomers initially thought this cosmic gravy was perfectly uniform, like something Julia Child might have whipped up. But not even Einstein’s “Old One” can make a perfect gravy, apparently, and in 1992 astronomers discovered that the cosmic gravy is lumpy. And that’s a reason to be thankful this year, or any year, because without those lumps there would be no us.

“If you’re religious, it’s like seeing God,” George Smoot, an astronomer at the University of California’s Lawrence Berkeley National Laboratory who won a Nobel Prize for the 1992 discovery, said at the time.

That fizzy energy stew of the Big Bang manifests itself today as a bath of microwave radiation that fills the sky. In effect, we live amid the fading remnant of the primordial fireball; astronomers call it the cosmic microwave background.

This cosmic gravy has been the subject of three Nobel Prizes: one to Arno Penzias and Robert Wilson, the Bell Labs astronomers who discovered the radiation by accident back in 1964; one to Smoot and his collaborator, John Mather, in 2006; and the third to James Peebles of Princeton, for his early work on the properties of this fireball.

The discovery of the cosmic microwave background cemented the case for the Big Bang origin of the universe. But there was a problem. In every direction that radio astronomers looked, the temperature of the cosmic gravy was exactly the same: 2.725°C above absolute zero, even in places so far apart that, according to a conventional rewinding of the expansion of the universe, the regions could not ever have touched. It was as if Christopher Columbus had sailed all over the world and found that, wherever he went, the local inhabitants spoke perfect Italian.

How could this be? Alan Guth, a theoretical physicist at MIT, proposed an answer in 1980: In its early moments, the universe was under the sway of an exotic force that caused a brief, violent moment of hyperexpansion, called inflation. In that instant, what is now the whole observable universe grew from a single submicroscopic point to the size of a grapefruit, and then expanded at the more leisurely rate seen today. In the process, any primordial nonuniformities, or lumps, were swept forever out of view.

But in the whack-a-mole world of cosmology, this solution only raised another problem. The universe today is quite obviously not uniform — it is full of giant lumps called stars and galaxies. How did they arise?

Inflation offered an answer for that, too: Whatever force drove inflation would have been subjected to the randomness of quantum mechanics, the weird rules that govern subatomic physics. The result would be submicroscopic irregularities or fluctuations, teeny-tiny lumps of hot and cold. Over cosmic time these would grow, as gravity drew them into the majestic clouds of stars we call home. The theory, if true, offered a stunning unification of the very large and the very small — of the random subatomic realm and the galumphing, space-bending world of Einstein.

But a decade of more and more sensitive observations failed to find any hot spots or lumps; the cosmic gravy had been finely stirred, and the notion of inflation seemed doomed. Then, in 1992, Smoot reported that data from a satellite experiment called the Cosmic Background Explorer, or Cobe, revealed a pattern of minuscule temperature variations in the gravy, amounting to 500 millionths of a degree Celsius, in the range of what inflation had predicted. The gravy had lumps after all!

Subsequent experiments with balloons, radio telescopes and space missions, such as Nasa’s Wilkinson Microwave Anisotropy Project and the European Space Agency’s Planck telescope, have sifted and studied those lumps and the surrounding gravy of energy sufficiently to sketch a detailed portrait of the infant cosmos roughly 380,000 years after the Big Bang.

Using this data, astronomers have been able to come up with a complete recipe for how the universe came to be. The so-called Standard Model answers all the questions that scientists have traditionally argued about: how big and old the universe is, how fast it is expanding, how the stars and galaxies evolved and grew and how the cosmos will eventually end.

Lately, however, cracks have developed in this model and some astronomers have complained that maybe some ingredients have been left out of the recipe. For instance, their increasingly precise measurements of the cosmic expansion rate, or Hubble constant, using different techniques, don’t quite agree.

Moreover, three astronomers recently suggested that the universe is even lumpier and denser than the standard recipe prescribes, based on an analysis of the Planck data. The cosmic gravy is thicker than was thought. This would have a drastic effect on the shape and fate of the cosmos.

According to Einstein’s theory of general relativity, the extra mass in the gravy would warp the geometry of the universe. Most cosmologists have preferred, on mathematical grounds, to think of space-time as flat, like a sheet of paper, and infinite; added mass would make it curved, like the surface of a sphere, and finite. If you travelled long enough in any direction in an extra-lumpy cosmos, you would eventually return to Earth (or to whatever it became in the trillions of years the journey took).

But adjusting the cosmic recipe to allow for more density would throw everything else seriously out of whack. A handful of cosmologists I consulted recently in a quick email seminar weren’t ready to change the recipe just yet, even though they all agree that there are mysteries in the Planck data. There is still an excellent chance that these new results are a statistical fluke.

Indeed, the change would be so radical that Joseph Silk, an astrophysicist at Oxford and one of three authors of the paper that presented the new analysis, declined to bring it up in October at a major cosmology conference in Chicago.

So I asked Silk: How would he account for all the “fine-tuned” features, like the extreme flatness and uniformity of the universe, that the standard inflation recipe so neatly explains. A good cook is always willing to experiment, and Silk was unperturbed. “I don’t think it’s any more of a tuning issue than the various others being discussed,” he said.

There is an art to making gravy. You’ll make mistakes, and you’ll take some lumps, on the stove and in the seminar room. If you can’t stand the heat, stay out of the cosmic kitchen.