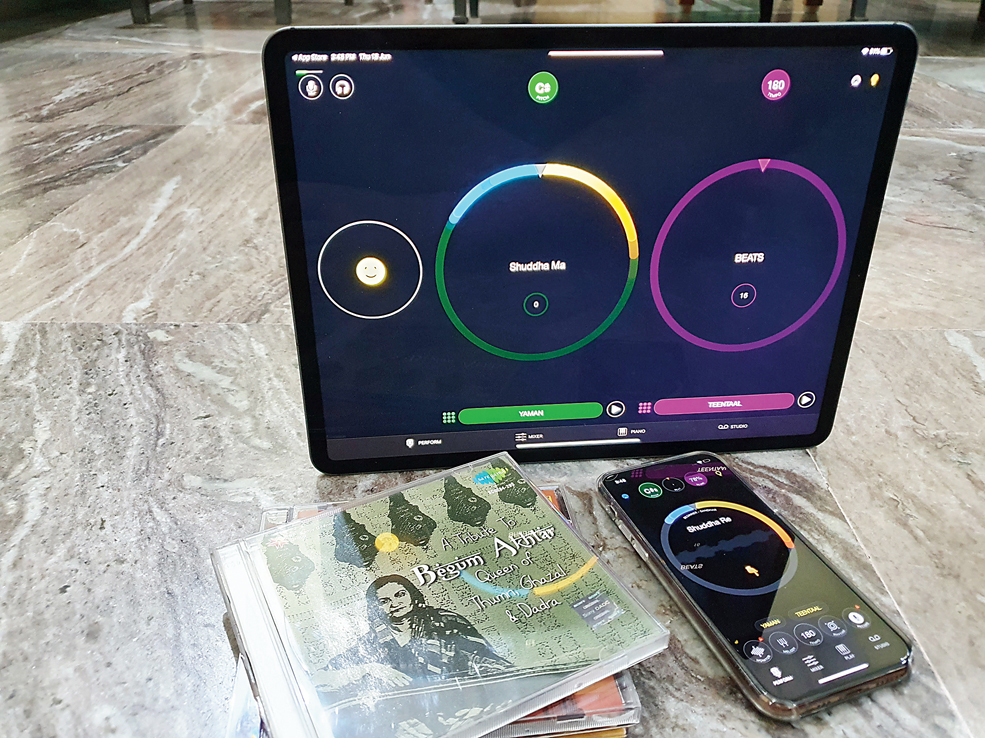 NaadSadhana, which works on the iPhone and iPad, pushes the limits of hardware, software, technology, AI and music
The Telegraph
Mathures Paul   |   Published 20.06.20, 07:41 PM

Computers have helped change the way we listen to music. Apple’s iOS ecosystem has taken it a notch higher, it has changed the way one can learn music. NaadSadhana is an example of this, unfolding in Pune.

Sandeep Ranade has devoted his life to computer science and classical music in equal parts. He finds it difficult to choose one over another. In the process he came up with an app that’s unique. Describing NaadSadhana as an app to train in classical music would be an oversimplification. The way it uses the swaramandal is unique and so is its AI-driven tabla player.

The developer: Sandeep Ranade is an Indian classical vocalist from Pune. As a software engineer, he has worked in the US at companies like Google, Microsoft, Citrix, Vmware and Cirtas (start-up). He holds a masters degree in computer science from Johns Hopkins University. He’s a disciple of Pandit Jasraj.
Sourced by the Telegraph

With the next edition of Apple Worldwide Developers Conference scheduled for June 22 to 26, The Telegraph dialled Sandeep Ranade to find out what makes iOS unique.

Though you have been a software engineer for years, what inspired you to come up with the app NaadSadhana?

I have been learning music for a very long time and I have been teaching music for 18 years now. During this time I realised that what the gurukul system of teaching got right and it is something we are losing out on now. Technology has progressed in leaps and bounds but the same technology is taking us away from the true musicality that the gurukul system endowed on its students. In the gurukul system, one would go and stay with the guru and you would be taught eight or 10 hours a day and you would be in the presence of the highest quality of teaching and music. Also, there would be an assigned tabla player, at times a harmonium player and advanced students in your company. So you would basically get the core teachings in such a high-quality environment... and so frequently... that there was rarely a chance to learn anything incorrect.

When you learned something correctly, you would take it to a new level and in a few months or years would get into a zone of very high-quality music. You are not bound by memorisation or habits you had to unlearn. With technology there are good things obviously, like, for example, the ability to create a tabla track. There are videos you can learn from. But all of these, till recently, were metronomic or static. High-resolution course correction is something that I found missing in the technology that I was using for my own riyaz. I was waiting for something spectacular to come my way but I kept waiting.

This is when a student came to me. She had been learning from another tutor for eight or 10 years. She was not happy with her progress. When we started, I realised she couldn’t navigate certain notes... a flat base in a particular raga. She either snapped into the base note or one note higher. We started course correcting for one hour every week and then in the remaining six days she would practise on her own. When we met again the following week, she was back to square one. Basically she couldn’t identify mistakes while practising on her own. That is when the idea came to me… for a tuner kind of an app, which is also visual. I started putting together an app and found out that vocal analysis is notoriously difficult.

Indian classical music comes with a lot of complexities. How did you tackle it?

Voice itself is so complex and it has multiple overtones and harmonics. There are a lot of algorithms that have come out of research at universities. None of these were quite right for my app. My expertise is in distributed systems and operating and storage systems. Sound analysis is a field I had no expertise in and had to teach myself DSP (Digital Signal Processing). My first iteration on the algorithm worked but it drained my iPhone battery badly. That wasn’t feasible. After that I created my own algorithm, which works pretty well.

The other challenge involves the many sounds around us — falling utensils, screaming kids, car horns... these sounds tend to throw the tuner off. I decided to build an AI component to detect music specifically and ignore everything else. When I speak, for example, the tuner won’t show anything most of the time, like 90-95 per cent of the time. The hardest test was when I went on a long drive on the highway. I sang throughout the journey and the tuner would catch different notes but still analysed my music correctly. That was the first version of the app.

Any instrument that has a tremolo is difficult to analyse. What is the margin of error I should allow? What can my ears detect? I had to create a model of the ear and then worked on the margin of error. I had to deal with ‘psychoacoustics’. Also, if you sing fast enough, the tuner will provide feedback at a rate that your eyes can’t absorb. I wanted to do something to help students automatically hit the right notes.

This is where the swarmandal comes in. It is like an autoharp which creates music one can perform or practise to. There are other apps that would play the swarmandal every 60 seconds or if you tap on a button. And it would play a fixed pattern. I didn’t want that because that’s not how I would play it in concerts. So I created AI learning from two exemplary artistes, who are also amazing swarmandal players. One is Sangeet Martand Pandit Jasrajji, who is my guru, and the late Gaansaraswati Kishori Amonkar. The AI learnt their playing styles.

Another challenge. Creating a live tabla experience is complex and subtle. And one of the reasons why it was mind-boggling is because I have never been a tabla player, I have only scratched the surface. I had the blessings of taalyogi Pandit Suresh Talwalkar. At first, he thought it was not possible because getting graceful continuity of sound is impossible with samples. But after he heard what I had come up with, he said that the prototype sounded “human” but untrained and he asked his student and acclaimed tabla player Rohit Mujumdar to help me with the content aspect.

Why did you choose the iOS ecosystem over Android?

In my experience, Android is not designed for synthesizing and playing sounds in real-time. For every sample that is played or generated, by the time I say “play this” and when it is actually played, there is a rather long and unpredictable delay. And this is something I experienced with the swarmandal itself. With the tabla, things are more complex.

Once I got a MacBook Pro and an iPhone, I realised the power of iOS. The more I delve into iOS, there is no competition. The sound quality and low latency that iOS provides is very difficult to replicate on another platform. Also, an iOS app works across all Apple devices equally well.

NaadSadhana is pushing the limits of hardware, software, technology, AI and music and is currently only possible on iOS devices. NaadSadhana does intense real-time processing like music detection AI, synthesising and simulating sounds for realistic instruments, raga creativity AI, taal aesthetics AI, analysing music (notes, raga, phrases, layakari, volume modulation, modality, bandish, mukhada and so on). To responsiveness, the processing has to happen within a few milliseconds. Unfortunately, Android suffers from high unpredictable latency which makes implementing an app like NaadSadhana difficult.