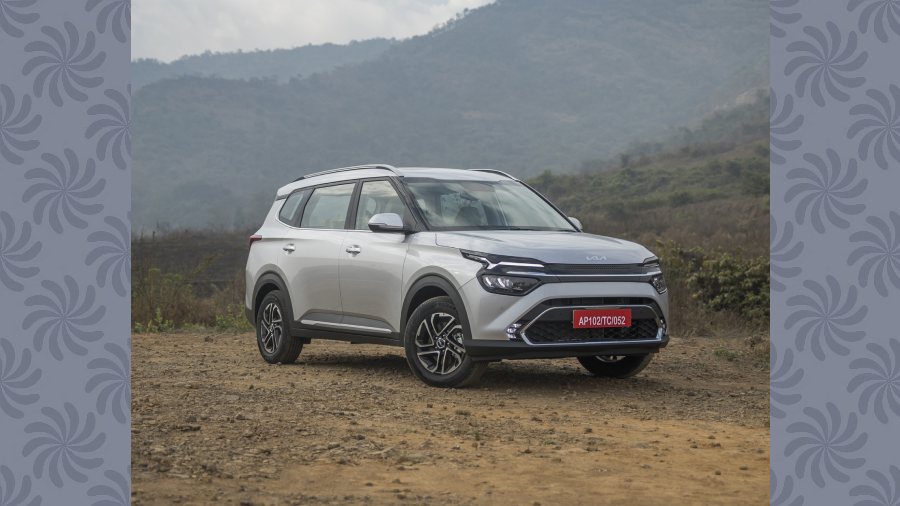 Carbuyers in India seem to be back in business with a vengeance in what is the (hopefully) tail end of the Covid pandemic. Pretty much anything that companies can make is zipping out of showrooms as the rush to pick up personal vehicles shows no sign of abating. And one of the segments that has got a boost is the seven-seater SUV.

It’s not exactly a child of the pandemic, so to speak. Most of the ones that are rolling out now have been in the works or at least in the planning stages since before the pandemic. But their popularity has soared as the pandemic has in many cases thrown families closer together and now they need vehicles that will ferry them around. So quite a few crossovers and SUVs like the Tata Safari and Hyundai Alcazar, essentially six- or seven-seater versions of existing five-seaters, have entered the fray. And the latest is the Kia Carens.

Celica Kia, Salt Lake, lent us two versions of the Carens, the petrol manual and the diesel automatic in top trim to try out. And we found much to like in them.
the exteriors

Typically, the ‘grown up’ versions of the five-seaters look much the same as the vehicles that they are based on up to the end of the front doors. After which, be it the wheelbase, or the design mods necessary to accommodate the third row of passengers show up.

Not the Carens though. It looks almost nothing like the Seltos five-seater SUV, with which it shares its underpinnings, either inside or outside. We’ll come to the inside in a bit, but on the outside the styling is more muted and much of the hands-on-hips planted feet stance has been swapped out for a more sophisticated look. Well, being a crossover SUV, it does retain quite a bit of the boxiness.

One notable thing is that Kia’s signature ‘tiger nose’ grille has now moved right down to the bottom of the front bumper and is far less obvious than in earlier models, especially with the reg plate attached. There is s textured black plastic faux grille kind of section between the headlamp clusters while the actual air intake is the chrome surrounded hexagonal section further below that is flanked by the fog lamps.

At the tail end, the eyecatchers are the LED tail lamp clusters with their sharp design. The curves and creases are not in-the-face, but work well to take the blah out of the look of the tailgate. The chrome inserts on bumper are reminiscent of what the grille used to be and work better with darker shades of paint. On the whole, a basically fairly upright section has been handled quite subtly.

The flanks are simple with a few nice touches like the chrome strip that goes below the glass area and wraps around the end of it. A pair of creases from the front and rear also add feature to an otherwise plain section. The roof rails look good but are not load-carrying ones. The design of the 16-inch alloy wheels is  smart and enhances the profile.

The automatic version comes with a drive mode selector

This is what the Kia Carens is majorly about. Kia says it is focused on carrying a family around and has tried to build something that does so without compromising on comfort and convenience.

It is also designed to give a premium feel to the user and it does pretty well on all these counts.

Let’s start with the third row of seats, which is the key difference between this and its five-seater sibling. Kia has made sure that one makes the minimum effort to flip the middle row of seats over to get access to the back row. Pressing one button is all that one needs to do for the middle seat to fold down and tumble forward to create a fairly generous passage. Once in the seat, it doesn’t feel squatty and while very tall people might find headroom wanting, for the average person it is comfortable. In fact, while we have not done it, the sense is that one can do even longer journeys sitting here. Assuming one will spend a substantial amount of time here, Kia has given this row cooling vents and a USB charger port on either side as well. Also, the view out is decent enough and one doesn’t feel like he has been put inside a box.

The middle row of the six-seater is a great place to be in and access to the third row is by tumbling this seat forward, which happens at the press of a button

The middle row meanwhile, is possibly as good as the front in the six-seater. The captain’s seats are very comfortable and generous with respect to leg room and headroom. The bench seat of the seven-seater is pretty good too, even for the middle passenger since the floor is quite flat. Another good thing is that the air vents are on the roof and that helps keep passengers better cooled. The centre armrest, apart from the aircon controls for the rear seats has the air purifier as well and a couple of USB ports. There is possibly a port for every seat in this vehicle.

Up front, the dashboard design is quite stylish, particularly with the wing-like extensions on to the front doors. Again, compared to the Seltos, the design has been toned down and the stress is on being stylish and subtle. The front seats are ventilated to help stay cool in Indian summers. The instrument cluster is fully digital and there is the de rigeur infotainment touchscreen as well.

The Kia Carens is essentially the six- or seven-seater version of the Seltos, but doesn’t look like it from any angle at all (top, middle and above)

The Carens is a comfortable vehicle that has a very car-ish feel to it behind the steering wheel. It is easy to drive with large glass areas all around helping with visibility.
We drove the 1.4 T-GDi petrol manual and the CRDi diesel automatic. Now this petrol is also available Kia’s smaller SUVs, but is less peppy in the Carens since it has to haul a heavier weight. Still, it is quite lively and gearbox smooth and sure. Important for a family vehicle is that it’s quiet in normal driving that helps with the sense of refinement.

The diesel automatic could be better in city conditions though since it delivers torque from pretty slow engine speeds and is quite effortless to drive in most situations. It might also be the more economical option for a vehicle aimed at moving people comfortably than for outright go.

While both the engines are competent, it is the quality of ride that is commendable. Kia, too, has mastered the art of handling India’s bad roads and insulates passengers quite well. The compromise for a longish car with somewhat softer suspension oriented towards comfort means that the Carens doesn’t like to be hustled much. Which, we think, is a fair tradeoff.

THE CALL
Clearly, Kia has built the Carens with a target buyer in mind and it has done a good job of it. The vehicle is high on creature comforts, space, connectivity and safety. And it moves people around competently. What more does one ask for?

THE CARENS IN NUMBERS