Edward Osborne Wilson was one of the greatest biologists of the 20th century, a classical naturalist drawn to wild places. He died recently at 92. Excerpts of an interview with him 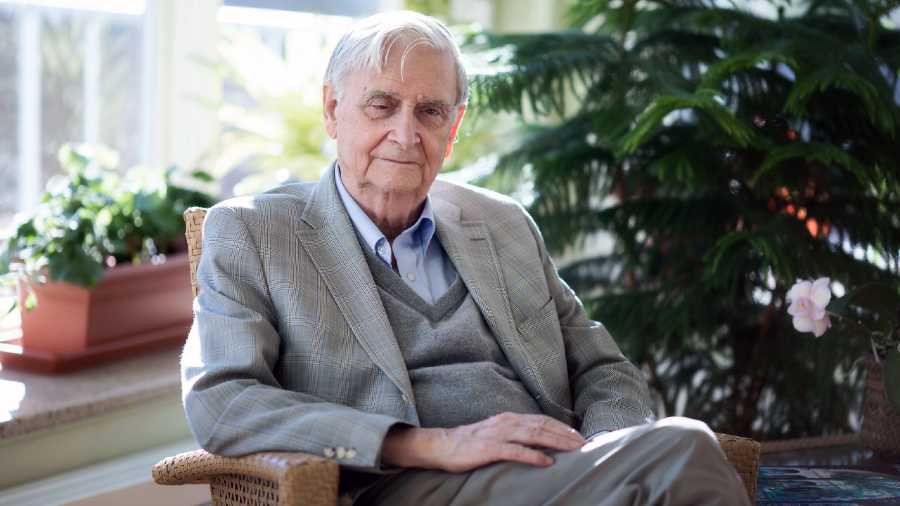 He was the world’s foremost specialist in the biology of ants. But his mind and talent ranged far beyond insects. He was a profound thinker who developed major theories in ecology and evolution. He became an unlikely celebrity, taking centre stage in two controversies of 20th-century science.

Over the course of his career, he won nearly every major award in science — and two Pulitzer Prizes.

The New York Times sat down with him in his office at Harvard, US, in March 2008 for an interview to discuss his life and how his love of science grew out of his love of the natural world.

Wilson: Future generations are going to forgive us our horrible genocidal wars, because it’ll pass too far in history. They will forgive us all of the earlier generations’ follies and the harm. But they will not forgive us having so carelessly thrown away a large part of the rest of life on our watch.

Wilson: I believe that a child is, by nature, a hunter. I started with a butterfly collection when I was nine years old. And I fancied myself an explorer, and decided that I would conduct an expedition and collect insects. And I started it, and I never stopped.

In the 1970s, Wilson became the centre of a political storm when he pioneered a new discipline called sociobiology. He extended his ideas on social insect behaviour to animals and then humans, thrusting himself centre stage into the debate over nature versus nurture.

Wilson: What it did was to flutter the dovecotes of the social sciences and, generally, of the political far Left. All of those had decided that the human brain is a blank slate, and that everything is determined by history and by contingency. And anybody that said that there was a biologically-based human nature would have to be up to no good. What you were doing was opening the door to racism or sex discrimination. The opposition to socio-biology at Harvard was particularly virulent. It was led by Richard Lewontin and Steve Gould. They set out to discredit entirely any merit to sociobiology.

For Wilson, the criticism took a more concrete form at the annual meet of the American Association for the Advancement of Science.

Wilson: My turn came to give the talk. And this group, they rushed the stage. They grabbed the microphone. One of the young women came up behind me, seized the pitcher of ice water and poured it on my head. I was saying to myself, this is very interesting. I think I’m going to be the only scientist ever physically attacked in recent years for an idea.

Some people have called you a modern-day Darwin. Setting aside false modesty, how does that sit with you?

Wilson: Of course, he, being the pioneer and a man of just almost unbelievable acuity, I think he’s matchless. But among current living people, I think I’m the best approach.

Wilson was born in 1929 in Birmingham, Alabama. His home life was difficult. His father was an alcoholic who eventually committed suicide. But these hardships were paired with a natural love of the outdoors.

Wilson: My father had jobs that took him to many places, to several localities in Alabama, and then Pensacola and so on. I went to something like 15 or 16 schools in 11 years of schooling. I was pretty much on my own as an only child, so I had the woods to myself, so to speak. And I felt like an explorer every day I went out. I brought home black widows. My parents actually allowed me to breed black widow spiders in big jars on the back porch.

So do you believe in God?

Wilson: I’m not an atheist, because I think it would be foolish to deny, dogmatically, the possibility of some form of superior intelligence. But religion is simply an expression of tribalism that includes the belief, the hope, the desire that that particular tribe is blessed by God. Satisfied with that explanation, I then find it a lot easier to talk with tribal chiefs, also known as priests, rabbis and pastors.

His greatest legacy may be his effort to preserve the planet’s declining biodiversity.

Wilson: What we have to keep in mind, in considering the rest of life on Earth, is that we’re losing it. And it is the part that cannot be brought back. We are destroying species and ecosystems, which are millions of years old and invaluable to humanity and future generations. And we don’t know how fast they are disappearing. How to wake things up? So I wrote a paper called the Encyclopedia of Life. And this caught very quickly. A lot of people said, yes, that’s the way to do it. Electronic encyclopedia with a website for each species of organisms in the world, even if there turned out to be 100 million of them.

Wilson: As a successor to Darwin. [Laughs.] As having carried the torch, at least for a short while.