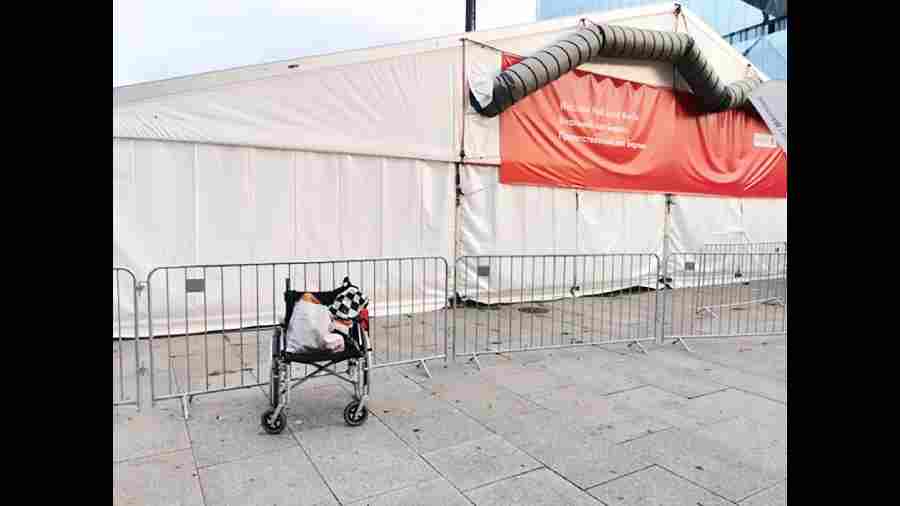 It’s odd to witness the fraying of quotidian systems in the so-called ‘first world’. Standing on a platform at Berlin airport, I watch as a long overdue train pulls up. The crowd on the platform rushes to get in, even before the passengers inside can alight. Out-coming suitcases collide with in-going ones, criss-crossing baby buggies get their wheels entangled, a man’s loose shirt with its bright holiday print almost gets torn off his shoulder. I consider entering the melee and try to switch on all my Calcutta minibus muscle memory, but no chance — I’m a yard short and one big suitcase, too cumbersome as the doorway, becomes a frieze of bodies. As the doors slide shut, smarter people on the platform are already heading to the elevators to switch to the platform where the next train to the city (also overdue) will stop.

Inside the train, everyone is pasted up against everyone else. In case I’d imagined that only foreigners were doing the pushing and shoving I’ve been disabused quickly by all the calling and shouting in German. As we sway our way into the city, I notice that the masking is uneven — some people have the FFP2 masks correctly over mouth and nose, others have the thin, nose-negligee ones, many with noses fully exposed, and some don’t bother at all despite the constant recorded announcements on the PA about masks being mandatory.

I’ve been in Berlin in mid-summer many times, when it has been warm and bright, but this time it feels extra hot and fetid. People seem acutely aware of both global warming and the freezing winter that’s likely to come with its Russia-triggered gas shortages. Weirdly, this awareness seems to make things hotter and more airless.

On the south side of the Hauptbahnhof, the main train station, there is a huge shamiana-type tent with signs in English and Cyrillic. This is the reception centre for refugees from Ukraine and at that moment it is empty. Walking past, it brings up the memory of Syrian refugees coming into Berlin a few years ago and the jam packed compounds in the Moabit area with families spilling out onto the sidewalks. The Ukrainians seem to have been absorbed into the city and the country far more systematically. After a few days, the word, ‘seem’, or ‘seems’, seems to come up a lot: things seem normal but…; the new(ish) government seems to be doing okay but…; at the moment we seem to be managing climate change in Germany but…; people seem to be prepared for a winter with severe gas shortages but… and so on. What is not in doubt is that Germany — and western Europe — have begun circling their wagons on several levels. As a body diverts extra blood to a vital body part that needs it urgently, a bulk of the cultural funding seems to have been deployed to supporting Ukraine and Ukranian artists and academics,with a lot less now available for the rest of the world. Politically, the attention of European politicians, too, seems to have pivoted largely to the continent’s immediate east with the goings on in pesky, seeming-democracies, such as India, taking a back seat.

In the huge, open-air German restaurant close to the Ukraine tent and the Reichstag, the summer evening is loud and fizzing with beery cheer. In one section, a private party dances to stale droppings of 80s disco. In others sections, people quaff the four variations of sausage available on the menu. As groups finish and leave, four boys from Gurdaspur, Punjab, clear the tables, keeping things turning over.

In a packed football bar, supporters of Borussia Dortmund make a sea of sweaty yellow t-shirts, eyes glued to two big screens. Amidst them is a lone, round-built, Werder Bremen fan, dancing silently every time his underdog team takes the game to the fancied opponents playing in their huge stadium in front of 81,000 people. The football, too, seems very un-German, all stuttering mid-field traffic-jam, botched passes, easily lost balls, and a couple of bad injuries stemming from no malice. By the 78th minute, Dortmund are 2-0 up and several not-small ladies are clearing their throats; the Bremen fan is swaying quietly and looking deep into his beer glass. Suddenly, there is a much-deserved return goal and the man starts to twirl an imaginary hula hoop. Bremen equalise at the beginning of the five minutes of stoppage time. The Dortmund fans scream in horror; the Bremen guy goes out of the bar and comes back in as if just entering. “What’s the score?” he asks innocently. No one looks at him. After another minute, Bremen score a third, snatching a crazy last-gasp victory.The Bremener goes ballistic with joy. “I’m so sorry!” he keeps saying in English. No one hits him.

One night, the section of the metro system between Warschauer Strasse and Ostkreuz stations is shut down. Walking home, I pass lots of youngsters in party mode, a mixture of languages washing over my ears. On the side streets leading to the rail tracks stand the police, their cars behind them blocking off the roads. As I approach Ostkreuz,there is a series of reverberating bangs. “Controlled explosion?” I ask my companion. “Could be,” he says, “good call”. Later, the news tells us that the closure was due to a big Second World War bomb that had been found by construction workers digging in the area. What we heard were the detonators of the bomb being set off; the actual bomb was taken to be exploded at a special site they have on the outskirts of the city.Strange are the ways of history: imagine a British or American bomb-aimeropening his bomb-hatch over eastern Berlin in 1944 or 45; as the bombs fall away, imagine a voice from 78 years in the future whispering to him ‘Hey. That 500 pounder you just dropped? That’s going to kill your great-grandson on his summer holiday in 2022.’ Walking around the next day, Berlin encourages the speculation: what bombs are we sowing today to go off a century later?